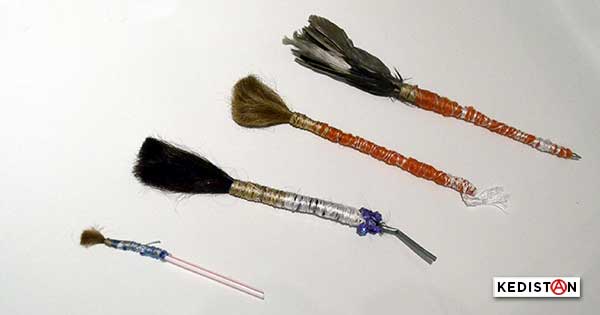 Artist, author and journalist Zehra Doğan will have spent the past five years with the smell of blood constantly in her nose, the blood drenching the lands where she was born.

Kedistan met her in the beginning of 2016 through one of its contributors who had struck up a friendship with her during the Gezi events in Istanbul. Zehra had answered our questions from Nusaybin. The siege and the destructions of that town led to her denunciation, arrest and imprisonment in Mardin. Prior to that she had been one of the rare journalists to document the kidnapping, rapes and murders of Yazidi women by ISIS Jihadists. The budding Rojava project held no secrets for her, and she is deeply frustrated now that she cannot go back to Kobanê.

During her first period of imprisonment on her lands in the Mardin jail, she allowed herself the creation of a prison newspaper with her do-detainees since “all the journalists were in jail”. Calling on her talent as an artist she also documented these 141 days in jail thus providing the basis for a first exhibition. During her second imprisonment, penitentiary authorities forbade her access to artistic supplies and materials. She then entered a period of resistance and produced an abundance of works based on that very rarity.

In the meantime she had migrated toward Istanbul for a clandestine period while awaiting her definitive sentencing. There also, she created an abundance of works, archiving the preceding years filled with exactions, crimes and massacres committed by Turkish armed forces in the villages and towns of Turkish Kurdistan. She calls these works “the clandestine period”. We had titled them “escaped works”, close to 50 of them which, with her approval, the Kedistan Association had exfiltrated from Istanbul, taking advantage of the trip of an art publisher as an opportunity to do so. Along with her diary, photos of these works were compiled in a book that is now out of print.

But Zehra, through the power of her art, of her words and of her pencil, was the willing victim for the wide sharing of the continuous suffering and persecutions of the Kurdish people. Thus was born the project of exhibiting her works in Europe as much as possible, as reproductions or originals Kedistan continued to contribute in exfiltrating, with the help of her relatives and friends, and of travellers…This wandering phase of her works and of her words began in earnest in 2017, when the book came out, copies of which came in contact with the public mostly during exhibitions or “Evenings for Zehra“. At the same time, a regular correspondence also largely allowed the reading of her prison writings. The printing of postcards also meant she received hundreds of messages of support, month after month.

Of course, the ant-like work performed by Kedistan would have been lost in the desert had it not been relayed by so many supportive people and encouraged by international association, such as the PEN club at first and the numerous support committees that sprung up. While prior to this, Kedistan had also provided a modest support to writer Aslı Erdoğan – thus learning how to set up the logistics of a campaign and required networking and materials, we had everything to learn in the domain of art, while getting as close as possible to the numerous Kurdish representatives here for these initiatives.

We still recall the first appearance of a large size portrait of Zehra with others, in front of the Turkish embassy in the Netherlands, held up by defendors of human rights. The strength of social networks and of the Web helped all those numerous but dispersed support initiatives, as they fed one another. And we love the image of the beating of a butterfly’s wings and that of the bird carrying thoughts of freedom. Zehra Doğan herself had drawn it from the depths of her jail cell. And what can we say about the giant Banksy mural and Ai Weiwei’s letters? 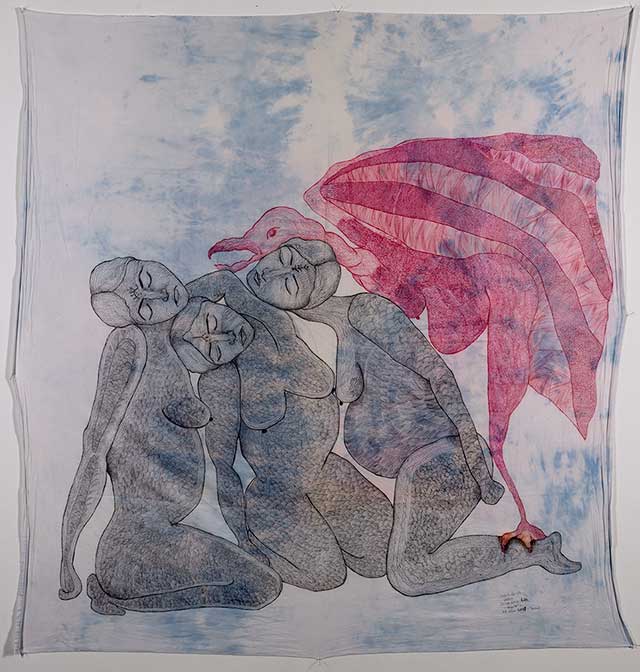 Why summarize in this way these past years where a strong solidarity was slowly built up around Zehra Doğan?

A fundamentally political solidarity since, as she says herself “I will never work according to the codes, I don’t know how to do it”, meaning by this “meaningless” art and constant self-censorship with which she does not want to be associated.

It is precisely because today Zehra is free, at least physically, that the time has come for the butterfly’s wings to settle. The explosion of exhibitions, of varied and numerous sollicitations in her direction and the number of ways opening up for her voice and her art, are beyond our level of competence.

Feeling free is not simple for Zehra Doğan.

Nor is it simple for Kedistan to think and to say that a page is being turned and that these works that were formerly exhibited as archives of the Turkish regime’s exactions are now coveted by the art market. This paradox is not really in keeping with Kedistan’s reason for being. Our work as apprentice-gallerists will stop here. Fifteen of her works have already been incorporated in the collections of French national museums, via the Mucem in Marseille, including that representing Kemal Kurkut, and we consider that this is a choice location for it.

The exhibition ending in Paris at l’Espace Femmes, just as the magnificent one of 60 of her unpublished works at the Santa Giulia Museum in Brescia, Italy, along with the one at New York’s Drawing Center were all cries raised against the imprisonment and persecution of the Kurdish people, along with support for Rojava. Zehra will have to struggle with the demons of the art market so that the rest will respect her narrative, her word and her cry of obstinate defense of the Kurdish people. More professional supporters will surely be available to her. At this level, Kedistan is no longer competent. 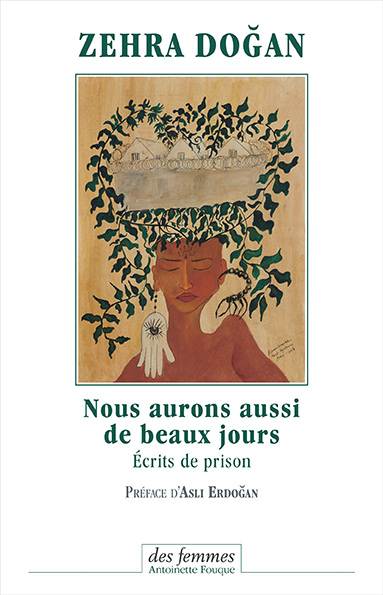 Zehra now has a future before her

And no one can doubt she will live it fully. And if they are not the “fine days” as in the title of her prison writings published at Editions des Femmes, they will undoubtedly be “great days”.

We thus wanted to close the special dossier on Kedistan. You can follow the links here. What will remain is a vigilant and unshakeable friendship. The beating wings have settled, the heartbeat remains.

Along with so many thanks to all those who supported, accompanied, relayed and encouraged, aided and prolonged the actions, and all those whose paths we crossed along the road. Thanks go out also to the ones greater than us who contributed to the solidarity. Too bad for those who understood nothing from the outself and who go on speculating. They know who they are.

Finally, a sincere thanks to all the medias now taking up the relay, those on the left in France still ignoring her or busy examining their own navel and their necessary audience… They did not disturb us and that’s just as well. There are also those journalists who aided the solidarity who have the honor of having practiced their trade.