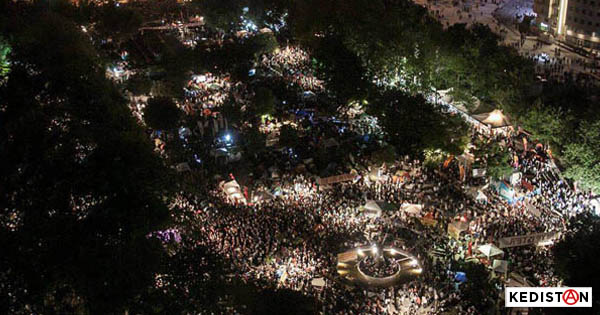 In Turkey’s history, “Gezi” is the most important resistance movement triggered by environmental questions.

Mobilization began on May 27th 2013 with a group rallye in Gezi Park to stop machinery brought in to cut down the trees. It became a de facto ZAD (translator’s note : “Zone à Défendre” in French, meaning a zone in need of protection) since it turned into an occupation !

Starting from this fixation point and the relays that ensued (press articles, social media, word of mouth) by the beginning of June, crowds had started filling streets in large and small towns.

The demonstrators chanted slogans, carried signs, carnations at times. They were peaceful. Governmental response was disproportionality violent causing thousands of injuries, including several instances of severe brain trauma, and mutilations such as the loss of an eye. The forces of repression worldwide use identical equipment, causing similar wounds. Five people died.

But how did we get to that point ?

It’s a long story meeting up with the country’s recent history. On a politically tense background, there came a last drop that overfilled the cup. That drop was Gezi Park.

In fact, everything began with ten trees or so. Yes, yes, a few trees. Some ten trees were to be cut down in a park that was to be razed to build something else. An urbanization project like many others now in Istanbul…

A project I can add without hesitation to the list of all those « useless and costly projects » against which struggles are organized, police responding with all its violent migh, leaving battered victims on the ground.

In Gezi Park, a handful of people wanted to stop the tree-cutting machinery. Of course, our dear media embroidered around this visible part of the iceberg for a long time on the theme of « a few miserable trees », until they could no longer deny the fact something important was going on. Something that went far beyond. You could say they used the trees to hide the forest !

Gezi Park is next to Taksim Square in Istanbul. A few of you may know the neighborhood. If not, you’ve missed something because this neighborhood is the very symbol of cosmopolitan Istanbul.

The square gives out on several streets and the entire neighborhood teems with life. At the heart of the square stands a monument central to all official ceremonies. The historical tram serves as shuttle between the square and Istiklal Avenue… home of shops and restaurants – some of which have become institutions in Turkish gastronomy. Music-themed bars fill the adjoining streets. Crossing them, you cross the path of the country’s musical wealth. Live music, be it traditional, rock, punk, jazz… The French Consulate is also a part of the landscape.

But that’s not all. Taksim Square est the place for all political rallyes, the departure point for all demonstrations. It has seen all kinds. Happy moments, tragic ones… The most important was in 1977. During the May 1st demonstrations, 36 dead bloodied the ground of Taksim. This date has entered the country’s history as « the bloody First of May ».

Traditional May 1st demonstrations were banned for many years thereafter. In the past three or four years, they’ve resurfaced despite the ban. In Istanbul, they always take off from Taksim. And participation grows every year. Five hundred thousand, one million, a million and a half… When demonstrators chant the same slogans in all of the country’s towns, you feel a shiver down your spine. « Elbow to elbow against fascism ! » « Down with capitalism ! ». It’s impressive. The country thrums… And you are there, thrumming with it…

Why did the destruction of a park and some ten trees anger so many people ?

From City Hall, the government had announced an urban project for Taksim. Several main roads converge there. Vehicle and pedestrian circulation problably needed re-organization and the square required a touch of embellishment and renovation.

The problem was, among other things, that the project involved the destruction of the park, one of the rare parks in an urban setting. One of Istanbul’s lungs, a bit of breathing greenery.

Destroy the park for what replacement ?

I must give you a bit of this park’s history . Under the Ottoman Empire, there stood a casern there instead of a park : Halil Pasa’s Artillery Casern. It was built in 1803 by an Armenian architect, on an Armenian and Muslim cemetery.

In 1909 the soldiers of the Artillery battalion mutinied for they wished to impose Sharia Law. The Ottoman army put down the mutiny. Up until now, this casern had always been held as a symbol of obscurantism.

Later, in 1921, the casern’s inner courtyard became « Taksim Stadium », the first Turkish soccer stadium. Then, on the advice of French urbanist Henri Prost, the stadium was shut down in 1939, demolished the following year and the Republic of Turkey offered Gezi Park to the people of Istanbul. 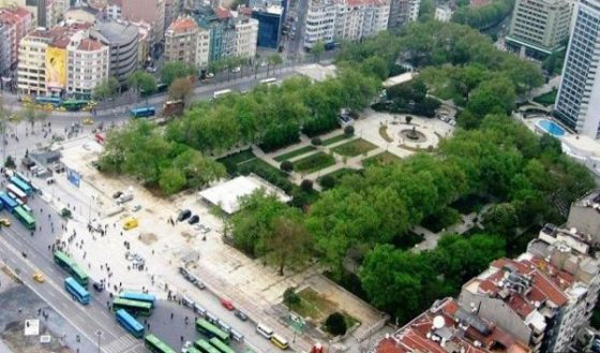 The recent urbanization project projected building a replica of the casern, as part of Turkey’s Ottoman cultural heritage.

Building an exact replica of this casern, all right, but to what use ? As a cultural centre ? A library ? A museum ?
No !
Are you ready : the plan was for the casern to serve as a shopping center.
Do you see the symbols ? A temple to the glory of obscurantism and of the merchandizing society !
Such a symbol, in a Turkey where secularism loses ground every day, where every bit of public property is sold off to hucksters, where a Prime Minister (Tayyip Erdogan, now President of the Republic) is a friend of Berlusconi… Well, people couldn’t shut up any longer.

The ranks grew of the small handful of people near the trees. One of my friends who was there that day told me :

People came in the hundreds, then in the thousands. We had trouble understanding ourselves what was going on. At first, there were a few tents, then a real village, so we organized. Food, water, clothing came from everywhere. A citizens’ assembly was constituted and it was in constant debate. The entire movement was peaceful. There were families, children, all kinds of people from every socio-cultural strata. And one night, the police charged. Violently. Very violently.

With examples in France, you know very well what police repression can be like with current equipment…

The violence was impressive, but the ones resisting also had their weapons :

intelligence, practicality and, most of all, solidarity and a sense of humor. This cocktail, more explosive than a Molotov was the essence of Gezi. The « Gezi spirit ».

Slogans, signs and tags to make you fall down laughing erupted like fireworks, turning to ridicule the declarations, orders and speeches delivered with utmost seriousness. Of the millions of examples, I remember the bright faces of three young women taggins a wall in reference to a piece of advice by Tayyip, then Prime Minister : « Families, have at least 3 children ». On the wall, I saw : « Are you sure you want 3 like us ? » I recall the slogan chanted as the tear gas rained down : « Your tear gas doesn’t bother me. When I was little, I ran after the truck spraying against mosquitos ! »

Solidarity was a story in itself. Helpfulness sprung up naturally. In the midst of real struggles and demands, differences die down of themselves… All those differences aimed at better managing people, separating the elderly from the young, women from men, social classes, believers from non believers, they all disappeared among the people gathered in Taksim…

I saw things I’d never seen in my life. An FB supporter helping a GS supporter to his feet. [Translator’s note : FB and GS are two opposing soccer teams]. Unheard of ! A Turk lending his arm to help a Kurd to walk, or the opposite. Can you imagine ? Old ladies bringing cut lemons, vinegar, so that people could cleanse their faces of the tear gas.

And I saw, the lists streaming on internet. Shops provided their wi-fi code so that everyone could communicate. Young people with cameras filmed and published non stop. Phone numbers streamed by – lawyer, doctors, nurses providing their personal number to help the wounded or the arrested. Makeshift infirmaries sprung up in hotels, in closed parking lots.

And during all this time, the Prime Minister talked of small groups, of terribly dangerous terrorists in the streets…For the government, this crowd was nothing but a few « çapulcu » (pronounce thcapouldjou), which means marauders, vandals, loafers… This also you will have no trouble understanding right away, because it is exactly was is going on for the ZADists in France, when the media describes them as drunks and dopeheads living in garbage.

When we look at the country even in a superficial way we see what the government is trying to demonstrate. « The godless are against the believers. » As if republican secularism oppressed believers. If the many Muslims resisting with us had considered that the Republic oppressed them, they wouldn’t have been there, at one with us.

What is remarkable and surprising : the young generations everyone considered individualistic and apolitical. « They don’t care, they’re consumers, that’s all they want, everything for them, no conscience…». Well, they fooled everyone. Even I was dumbfounded seeing the participation of young people in my family, the children of friends, who had never been interested in politics. « Down with capitalism ! ». « Erdogan, clear out! ». You become conscious and radicalized through struggling and resisting.

What did we win ?

The project was withdrawn. The park stayed. Taksim Square was covered over with cement. It’s lousy. 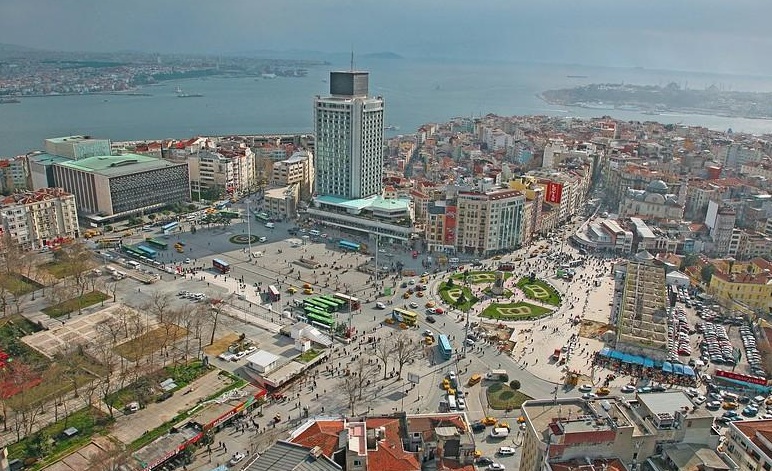 But things aren’t so simple.

After Gezi, several events sparked protests. Projects of the same ilk abound, the recent presidential White Palace with its one thousand rooms, the project for a third bridge over the Bosphorus, the revelations concerning the corruptions of government members and of those nearest Erdogan, the catastrophes linked to working conditions, contested results at municipal elections where rigging is suspected, the transformation of public schools into Coranic ones, the arrival of the scarf in schools, administrations, the national assembly…Sexist and racist declarations by elected members or Islamo-Conservative personalities encouraging violence against women…I can find you at least one for every day in the two years that have gone by since Gezi.

What matters most is this : the Gezi experience changed something in depth. Perhaps not for everyone but for many, and for a great number in the younger generation.

But the greatest victory was in realizing the strength we have when we come together for a struggle.

Gezi served to open eyes and to open the way. More and more people understand that economic liberalism is what keeps on spoiling everything in Turkey as well as in Europe. Over here, it spreads under the veil of obscurantism the better to advance under the mask of a withdrawal into a common identity.

Now, there’s all the rest. Other struggles. And we know we can do it together.