Zehra Doğan to Ai Weiwei, “Art is the best instrument for the struggle” 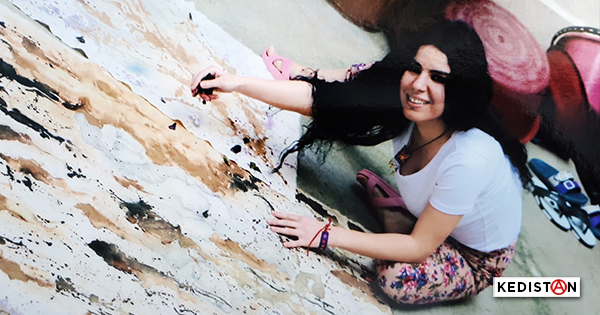 In letters she sent them, Zehra Doğan thanked artists Ai Weiwei and Banksy for their support. Although difficult, a correspondence had begun with the two celebrated artists and Zehra during her incarceration, and some of those letters were published by PEN International, on Banksy’s Instagram account, and in the media.

This time, the letter sent to Banksy will remain confidential or he will will choose the means for its communication, but Zehra sent us a copy of the one she sent to Ai Weiwei. Here is its full translation.

I thank you for the support you have shown me since my arrest and all through my imprisonment.

As you say, the most fundamental of all rights is that of freedom of expression and of identity. Unfortunately, demanding democracy in those lands which are at the bottom of the class in terms of human rights, and where everything is done to denature the world and transform it into a universe of weapons and war, is equivalent to a death sentence. And, what is  odd, the one who demands it is declared a traitor to the Homeland, considered a “terrorist” and sent straight to jail. I write you this, not knowing if I will be sent back to jail. I can’t risk a guess. In countries that don’t even apply their own laws, this kind of questioning is ordinary. Because the fact you are considered a “terrorist” does not rest on the laws, but on the leaders’ amount of ego.

In the lands where I live, there is an identity problem. Here for centuries we have shared these lands together, Armenians, Syriacs, Chaldeans, Mhallamis, Lazes and other people still. Now, even saying this and demanding to live on one’s own lands, with one’s own identity and language is interpreted as a “wish to divide the country”. For this reason, thousands of people are currently in jail. Thousands of children sick people and elders are in jail. Politicians, artists, defendors of rights, journalists, authors, are in jail. Today a hunger strike began at the instigation of Leyla Güven (a jailed elected deputy), has been joined by thousands of prisoners who are pursuing it. We are still living in a period where the body becomes an instrument of the struggle. Hundreds of my friends have put their body to the test, and I reiterate their demand.

Inside, there is a high level of persecution. Meanwhile, oppression continues against artists. Their drawings are confiscated, their notebooks filled with poetry are seized, as are drafts of author’s novels. This is going on at the moment. Many artists are subjected to these oppressive measures. Despite everything, we managed to transform the jail into an art workshop. And we managed to do this with the help of many people, including you, Ai Weiwei. This can happen thanks to the collective struggle.

Dear Ai Weiwei, the country where you were born is also an oppressive country in matters of human rights. For this reason, I’m convinced you understand very well what I have attempted to express. You never gave up either. If persecution exists somewhere, always, there also exists a dynamic against it. And art is the finest of those dynamics. I hope to go on breathing with this conviction.

I thank you again for your support.

Zehra is true to her word and does not keep quiet. The promise she made to her co-detainees to make known their condition and that of the children, is not without danger for her, as she states in this letter.

For these reasons, vigilance and solidarity must remain in full force.

As a reminder, some forty of Zehra Doğan’s original works, including a good number realized in prison, can be seen until the end of March in France, at the Rennes Opera House.