Zehra Doğan • Support through the pen 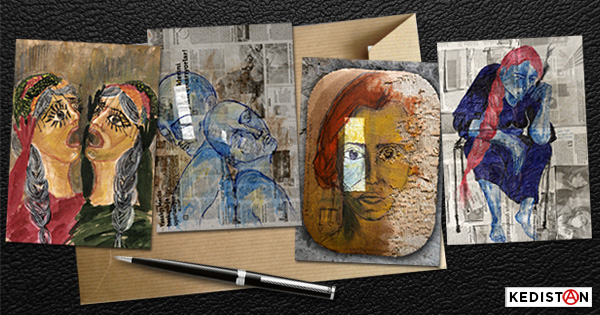 Zehra Doğan is still in detention at the women’s maximum security prison in Diyarbakır. Writing to her is still possible, it’s easy, and it costs nothing other than a simple moment of humanity.

With the extreme nationalistic tension that has gripped Turkey in the past few weeks since the armed aggression against Afrin (Northern Syria) and its Northern Democratic Federation, the prisoners and hostages of the Turkish regime are more than ever in need support.

Many associations such as Amnesty, PEN International, and others in Europe, the full list of which we can’t provide, do a remarkable job of this solidarity at the daily level.

There exists an ongoing correspondence with Zehra Doğan – excerpts from which we will translate for you some day – that show to what a degree the hostages’ daily resistance needs support.

Contacts with the outside world still respect some of the international provisions on prisons. The exchange of letters is one of these, even if it is subject to censorship and absurd rules.

We invite you once again to write and to ask others to write to Zehra.

Letters in Turkish have a better chance of clearing censorship. Of course, you may sign with your name and address…

Here is one translated model that can be recopied in its Turkish version.

Dear Zehra,
There is talk about you in Europe and I’m familiar with a few of your works through Internet. I know you and your cellmates will recover your freedom. The bad days will end and the free woman you are will be even freer. With admiration for your courage. A big greeting in solidarity from far away.

Translation in Turkish to be recopied :

The exhibitions of Zehra Doğan’s original works will continue. As will those of reproduction circulating throughout 2018.

Support initiatives are taking place, in large cities such as London, Vienna as well as in French provincial towns, with the sharing of her texts as well as of her pictorial work. You will find regular updates on these in Kedistan’s agenda.

Her support web is widening, and this is good news.

In an active and militant way, we will also continue to safeguard her rights and her image that some, as we well know, would like to “commercialize” if they were allowed to do so…

Some fifty of her prison works will be framed and secured very soon, for a separate exhibition illustrating a new period in Zehra’s art, and a demonstration of her resistance.

Here are a few of these visuals:

You must also know that the extreme tension in Turkey has repercussions inside the prisons and that “reprisals” are frequent right now, with sanctions exercised against visiting rights, correspondence…with each demonstration of resistance. So…

Other models for letter-writing are available HERE. Cards or suggestions for initiatives, HERE (in french).

And if you wish to contribute to the ongoing campaign, to the framing, it’s right this way (in french)…