Zehra Doğan’s journey beyond the walls 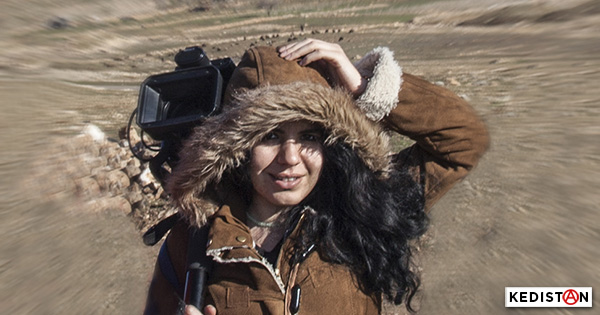 There, all is order and beauty,

These are the words that resonate in the famous French poet’s so familiar Invitation to the Voyage. Meanwhile, Zehra Doğan’s works travel without an invitation.

What could be more obvious for Zehra than knowing that her works are free while she works at forgetting the walls of the jail in which she resists, along with her co-detainees?

In June 2017, prior to her incarceration, she invited her own works to travel, texts and pictures both, like an extension into a free zone of the struggle she is pursuing as a prisoner at the mercy of a discretionary power in Turkey.

She is forbidden to paint or to draw with the required materials? No matter, she draws and paints with whatever she can put her hands on, and passes on her expertise around her.

She is forbidden to practice journalism? No matter, she writes, tells of the prison universe, and documents the lives of her co-detainees.

She is forbidden to be herself? No matter, she will remain Zehra, woman, Kurdish, artist and journalist, autonomous in the commune of the women’s quarters reserved to political prisoners in Amed’s high-security prison.

There, all is nothing but resistance and community,
Light, women and will.

I may be overdoing it here, I will draw down the ire of the jargon restrictors who will slash at my oh-so unpolitical speech. Come on, give us some ’Erdoğan murderous dictator’, damn it! What is this sirupy petit-bourgeois speechifying about confinement?

Prison walls do not collapse under the weight of ideological speech. If they did, we would know about it. Pretending I have the power to open wide the gates and cut down the barbed wire through the rhetoric of a political discourse just isn’t my thing. Faced with crushed human flesh, I find it useful to speak with human words, as long as I keep on hand answers to questions that will inevitably arise…

As are other hostages of the Rukish regime, prisoners it finds embarrassing,  Zehra Doğan is in prison since June 2017  for 2 years, 9 months and 22 days. Some have longer, some have shorter verdicts… Men, women, there  are tens of thousands of them held hostage, just as others are kept imprisonned by precariousness, exclusion or fear –  hundreds of thousands of other opponents outside the prison walls.

This reality cannot settle for a list of well thought-out signatures by political personalities or pseudo corporatist supporters working on their self-promotion…So if you think I’m moved by denunciation-type jargon, I have news for you!

Zehra has entrusted her works to travels on walls.

Here they are, also taking refuge in a book that will  travel from bookshops and shelves, awaiting the future  while speaking of a recent past to those who will open it.

Here they are also, braving a rainy winter in Brittany, hanging on stone walls, under the watchful eyes of Korrigans. The wide open eyes are misty, during their visit in Morlaix country, in Plouezoc’h. Tears of anger or of impotence, who knows…

They will move on to the shores of Maine, in Angers, through all of January, as they will accompany film projections, elsewhere in the South of France.

And in the rare moments when silence takes over in the jails, she can think of her drawings, her children displaying their wide open eyes in Europe. And she knows that they upset, raise questions, sometimes unsettle but also make answers easier to formulate.

Humans have no need of speeches and posturing that so often serve as preludes to oppression. But they hear and respond to intelligible words, no matter the language in which they are spoken.

I challenge anyone to look straight into the “eyes wide open” and not wonder “why“, “how“…Remember the poster “why?” that opened up so many minds to an understanding of the war in Indochina, way back when…

The next legs of the trip are in progress. Surrounding the exhibition of her works, there will be talk of journalism, women, oppression, political analyses of Turkey and Kurdistan, and…the future and Rojava. A leg in the journey where she will have much to say, so collective are her words.

My child, my sister,
Think of the necessity
Of our going there to support her together! !