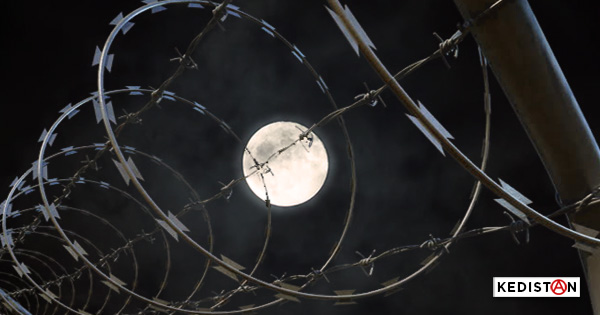 Once you will have read the excerpt from this letter, you will understand the reason and the form for the support to which you are invited, in complicity with our friend Zehra, for the full moon on the 20th of this month of January 2019.

At night, while she was in the jail of Amed (Diyarbakır) in Eastern Turkey, Zehra Doğan, the Kurdish woman, journalist and artist, looked up at the moon and the stars…

She was recently transferred to the jail in Tarsus, more than 500 km away from Diyarbakır, her native town. Zehra’s letters keep on reaching us nonetheless…

One of those leters talked to us about the moon, eternity and dancing women.

Night. A full moon above our heads. I start writing to you under its light.

It shines so prettily. It has not even managed to hide. It is behind the clouds but its halo reveals it in all its nakedness. So beautiful, so precious, so white. It’s light pierces the clouds, spreads all around and creates a strange atmosphere, like transparent magic.

As if I were outside, somewhere, thousands of years ago and as if, from the zenith, I were looking down on this moment.

Its light does such a job of embellishing these horrid barbed wires.

This leads me to think about the reason for the disgust we feel when encountering ugliness. In fact, if I look carefully, they are not so unsightly. Enmeshed barbed wires, shaped by certain human interventions. They stand there, silent and calm. They only serve as matter for certain feelings.

Simple barbed wires. Objects the name of which immediatly sours our faces and makes us say “so lousy”. The object used to mark frontiers, divide, define spaces and which, when we overstep those limits, punish us with their pointed tips.

Bathed in moonrays, their shadows scatter on the walls of the promenade, like dancing women. They shine even more, the lifeless barbed wires, sentinels to my condemnation.

This is why we call upon all supporters of Zehra Doğan and, through her, of all her political prisoner friends in Turkey, for a night-time rendez-vous of solidarity.

Different from the usual solidarity initiatives, this one will take place under the light of the moon who will act as the sacred godmother to this rendez-vous.

Wherever we may be, let us go and meet our godmother, if only for a few minutes, let us send up our messages of support, courage and energy through the moon’s intervention. The moon who will carry our messages to those who will be waiting behind bars, with their eyes on the full moon.

Wherever you may be on the five continents, alone or with friends, at home, in your garden, in the streets, under a starry winter sky, behind your windows, on your balconies bathed in moonlight…

If you wish to do some readings, follow this link for some texts by Zehra Doğan and this one for a collection of poems about the moon.

Let us know about your initiatives, the places, images… by email or via the Free Zehra Doğan facebook page… We will publish them.

The first is a book Zehra often talks about in her letters: “Caliban and the Witch” by Silvia Federici. And the second  is the one she was reading when she was transferred to the jail in Tarsus with 19 friends, despite the fact she was handcuffed in the transportation vehicle: “Women who run with wolves” by Clarissa Pinkola Estés. Pleasant reading…

And don’t forget that the new year is  an excellent excuse to send letters, cards, drawings toward the prison, at the following address: