Zehra Doğan, Kurdish woman • A meeting in the making 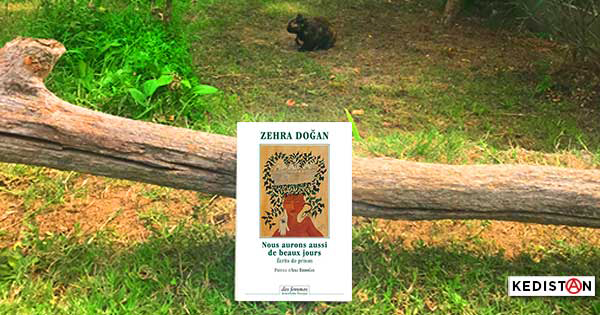 Zehra’s book is now available through pre-order and also on the publishers’ website, even though “Nous aurons aussi de beaux jours”, les écrits de prison (We will also know fine days, the prison writings) the official publishing date is on October 31st.

Note to English readers: Excerpts of Zehra Doğan’s prison correspondence were translated from the Turkish to French by their recipient, Naz Oke assisted by Daniel Fleury. The book is published in French. So why translate into English an article dealing with it?
Because some English speakers other languages. And even those who don’t may wish to stay abreast of news from outside their immediate realm.

For Parisians or visitors to the city who would like to have a few words by Zehra on their copy, nothing could be simpler: the exhibition of her escaped works begins on November 6th in the gallery of Espace Femmes – Antoinette Fouque, rue Jacob in Paris. Zehra Doğan will be on hand for a few days with the translator and thus, Kedistan also.

This has nothing to do with a society event but marks the achievements supported by a solidarity campaign that has been ongoing for over three years and that goes beyond Zehra’s person, as she has always said. The work is far from done in order to free political hostages in Turkey and the agressions against Rojava in Northern Syria, along with the identitarian tensions within Turkish society. More thane ver, these create an imperative need to keep the limelight on Turkish prisoners. We will soon offer up more more addresses. And even if you do not speak the language, the web being woven is what counts.

Read these prison writings. You will understand how important can be something as small as a card, a drawing, a few words in order to dispel oblivion. You will also read about what it is to be a woman, a Kurd and caged for her resistance.

Moreover, over more than a three year period, Zehra has produced hundreds of pictorial works that represent as many defiances against the prohibition of artistic supplies. Everything available was put to the service of drawing and painting. Cardboard, the reverse side of letters, foil paper from packs of cigarettes, old newspapers, fabric, towels, clothes. And as pigments, a palette ranging from crushed fruit and vegetables, bird dropping, moss, blood, grease from meals… Creating in order to resist, in order to denounced all that is “disgusting” about jail.

A small selection of these “escaped works” will be shown in Paris, at the same time as in Italy and, soon, in Germany.

Zehra is also active in following her heart that has escaped to Rojava. Through wall art in London, and speaking opportunities she attempts to denounced the invasion and the war crimes, despite the limited space that is hers. Don’t be disappointed if she does not talk about herself. She is this struggle for her tongue, her culture, her still-suffering people.

Her words will probably not be given as much attention as images from Hollywood surfing on the sufferings of the female Kurdish fighters. But that will also depend on you.

For Parisians again, do not miss the French PEN club evening on November 15 in this same venue, as part of the World Day in support for jailed authors. Zehra will also participate, she who was still in jail a year ago when her own texts were read at such an event.