Zehra Doğan • The red of blood is a colour 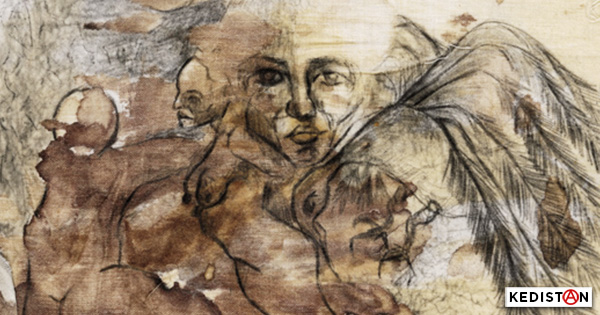 In press articles and at some exhibitions of her prison works, Zehra Doğan’s use of menstrual blood as a paint medium is often  highlighted.

Zehra did not have access to any art supplies, no pigments, papers, canvases or brushes with which to carry on with her art in Amed’s women-only prison. So she bypassed the prohibition after, as she says, having found that finally, she “had everything within easy reach”. She started using various supports such as fabric, scrap cardboard, various bits of paper, bird feathers and human hair. She worked on “prints” done on wet surfaces or prepared with cooking grease, or from the droppings left by birds in the morning.

Describing the jail in this way, its chipped walls and its promenade courtyard, where free birds satisfied natural needs, drawing shapes with a ballpoint or a lead pencil, women’s bodies, naked shapes suggested by some improbable trace, such were Zehra’s pictorial investigations, done in small formats, during the first months of a total ban on art supplies.

At the same time, Zehra Doğan was experimenting with natural pigments, spices, crushed medicinal tablets, mixed, or pounded in a raw state.

A good many of these hand-made pigments and odorous mixtures were destroyed by the guards, as were several experiments or completed works, they described as “garbage”, “disgusting products with an unbearable stench”, confiscated or thrown out, including some of her artworks. The last months of 2017 were spent in a cat and mouse game with the guards, aided and supported in this by her fellow prisoners.

At the time she was also struggling to find space and possible locations in which to draw, to paint, to protect her creations.

Partial bans on communication were imposed because of various breaches to the rules, such as “singing with co-detainees”  and, of course, having participated in “spirit of collective resistance”.

The authorities became aware of outside publications, as part of a solidarity campaign developed over a two-year period around some “names” in contemporary art, for example. The amount of letters and cards arriving at the prison, outside prohibition periods, was not to the liking of the administration either, forced as it was to tolerate this demonstration of solidarity.

But talking and writing about the use of “menstrual blood” appeared not only as a taboo, but  also as what it was: a woman’s resistance, proudly claiming her status and her gender, and making use of it in an artistic process, as a weapon of resistance. This was too much for the patriarchal mentality of the prison and its rules, as well as for its bigoted morality…

Of course, we have also seen press articles, although favorable to Zehra Doğan, where the term “blood” was used with a scandalous or provocative connotation, concerning a women’s prison… Such articles were quite unsuited to describing Zehra Dogan’s approach far removed from a victim’s simple call for help. From the top of her 29 years, she was claiming the time spent in prison as time in its full measure, for writing, for thinking, for creating and for struggling. Being a caged woman was one of those aspects…

Therefore, Zehra claimed her status as a woman, loud and clear. For her, the menstrual taboo is a patriarchal one, disguised under a heading of “dirt, lack of hygiene and cleanliness”, or even an “untouchable status”. Women’s blood would be dirty, and that of martyrs glorified? The writer dipping a pen in his blood or the knight’s oath with his blood would be actions praised to the heavens, and menstrual blood would be an excrement even lower on the scale of values than the droppings of a bird flying free?

Mixing red blood and turmeric yellow, coffee, ashes or the juices extracted from greens was not a provocation on Zehra’s part, nor was it a sordid appeal, but rather a claim of an existential nature. Nature which she uses in order to create.  Art devoid of trickery, far removed from contemporary art markets, and yet ephemeral, since it was destroyed when it fell under the hand of censorship.

Here, in one of her last letters,  Zehra tells us with much force and precision, how she behaved during this kind of exchange with her guards, when she was enjoined to answer “allegations of using feminine blood” still appearing here and there in what remains of   hard-pressed media, outside the voices of its master.

“Blood red is a colour, and you know it, so much of it flows on Kurdish lands”, Zehra Doğan could write.

Today is a “disgusting” day

The calendar shows a disgusting day. A warm day, buried in the womb of History, suspended above, anesthesizing the brain at each turn, with its constant mechanical sound…

The guard half-opens the door and calls out “Let Zehra Doğan come, the chief guard wants to speak to her”. Asking myself “what crime have I committed this time? Which drawing did they find problematic again?” I walk out the door, with Meral the representative of our quarter. The chief guard was waiting in the hallway. He started speaking with a relatively polite attitude, saying “I don’t know how to say this…”, “don’t mind me, please excuse me, but apparently you are making drawings with blood, is this true?” He asked with patriarchal embarrassment. On his own, he was censoring the word “menstrual” and settling on the word “blood”.

I then answered the man, adopting a posture showing there was nothing in need of being excused or resented, “Yes.”. “Don’t do it, he said, the prison staff is disgusted and they are afraid of catching germs.” The guard who was with him confirmed “yes, it’s disgusting”.  This unexpected obstacle caught me unprepared.

As the owner of this disgusting business, with a sense of responsibility, I answered him as quick as a flash: “Disgusting? The fact we are unjustly kept imprisoned here, and as if that was not enough, the fact that as an artist, the supplies I need for my art are forbidden, are already disgusting facts. What I’m subjected to is disgusting. I can only raise a protest against this disgusting state of affairs through something socially perceived as disgusting. A thing considered disgusting by the patriarchal mentality. Which is to say, menstrual blood. In order to define disgust experienced daily, that which is truly disgusting, I can only use something that you consider disgusting, the blood from my periods. If you are disgusted, that means I achieved my objective.”

I would have liked to explain to them that menstrual blood was considered as sacred in History, that there was nothing disgusting or germ-laden about it, that it was used by some aboriginal or tribal people to heal wounds, but I myself did not have the strength for that, nor they, the patience to listen.

Seeing my determination, the chief guard transformed the matter into an issue of conscience. “If you had a conscience, you wouldn’t do things that disgust people and that might infect them. Myself, were I to touch it, I wouldn’t leave my bathroom for the whole day,” he told me.

I closed the topic by telling him: “It would be a fine thing if the issue of conscience were a reciprocal matter. And also, if you could consult your conscience for not providing me with painting supplies and forbidding me their access in an arbitrary fashion. But it’s not a reciprocal matter of conscience. Conscience cannot function conditionally, only that which exists sees the light of day.”

The fact they tell me all this shows that I won a long time ago. The vanquished one is always in a begging position toward the victor. So I am the one who is the stronger. I thus have in my hands a power and they do not know what to make of it, when confronted with it. They end up clinging to conscience  and attempt to stop me. I know what conscience is, thanks to the struggle in which I believe. What is left to us is to listen to the voice of conscience. And as always, I add, my conscience. And my conscience tells me “carry on with your art, no matter what happens, keep on drawing and telling”. I listen, and I decide once again, to carry on.

This is what it means, being a woman in the patriarchal system. For the past five thousand years, we have been cursed, considered as disgusting. This is an imperative of monotheistic religions, this cursing of the seed from which it comes, the ovaries…In Judaism, among others, when a woman has her period, she must not touch anything, eat in a different plate, sleep in another bed, and even to avoid the loss of abundance to the household, she is put outside the house. Someone who touches her is considered soiled. At the end of her period, she washes, washes her clothes, breaks the plate and after making offerings, returns to the house. In Islam, things are no different. The woman who has her period cannot pray, bow down, fast. She cannot enter the mosque. The foods she cooks cannot be eaten, the ones she touches are spoiled. Judaism, Christianity, Islam, such is the hostility of patriarchal religion toward women. It’s about locking up, cursing.

This is how I found the way to face all of this. I wanted all the patriarchal ones to feel this, that they be disgusted by the disgusting woman.

Imagine a deputy, an elected woman in prison…For a second time, Leyla Güven is a candidate at the election. As a journalist, I would like to write on her electoral work. In prison, photos are forbidden. So I would like to draw, but there is no paper. So I draw on the torn wrapping papers used for lemons. In your opinion, just this one prohibition, that there is not one scrap of drawing paper, is that not in itself a disgusting situation?

Briefly stated, consider for yourself: what is disgusting, my drawings or my daily life?