A Case of Torture in Diyarbakır 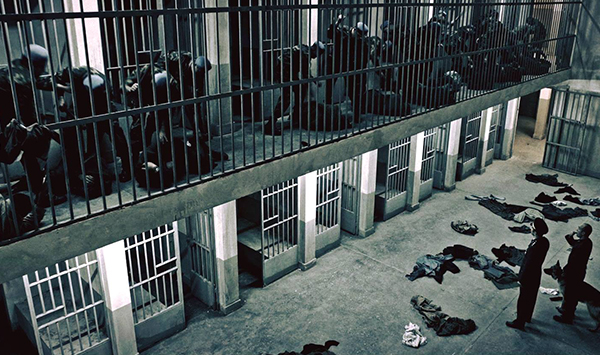 As a reminder, both the lexical and the legal definitions for the word “torture” are simple: “physical and/or moral pain inflicted voluntarily on someone.” By extension, “in order to obtain a consent or confessions.”

The situation inside Turkish prisons becomes more complicated daily. Not a day goes by where we don’t receive complaints about mistreatments and violations of rights. Serious cases such as that of Garibe Gezer, pushed to suicide in prison, or that of sick prisoners who are maintained under incarceration despite medical advice testifying that these persons should not be kept under the adverse conditions of prison, as is the case for Aysel Tuğluk, Mehmet Emin Özkan or yet again Ziya Ataman, to name just a few. There are hundreds of them, and any number of sick prisoners leave prison in a coffin…

Complaints for mistreatment, torture, rape are regularly filed by prisoners without result as their letters are often “lost”…From time to time the name of certain prisons appear in the news reporting sordid practices.

On February 2nd, we were advised of the testimony of a political prisoner, incarcerated in the type T prison of Diyarbakır. A journalist friend, Arat Barış, provided us with the few details he was able to obtain froma relative of prisoner Abdülaziz Tektaş.

Through a relative who was able to speak to him during the weekly authorized phone call, Abdülaziz Tektaş stated that on Janurary 31, their cell block was searched by the guards. The prisoners were handcuffed in the back, brought to a spot outside  coverage by surveillance cameras and subjected to cruel treatment.

Here is the testimony.

According to Abdülaziz, on the afternoon of January 31, a prisoner was about to be transferred to another prison.

It so happens that the prisoner being transferred was incarcerated with his brother. Seeing that his older brother was being transferred, he enquired about the destination. But the guard provided no information and avoided answering.

As a reminder, the practice of forced transfers, also known as « deportations » in the prisoners’ lingo, often to prisons far removed from the families, is used as a means of isolation and repression, this technique of oppression being widely used in Turkey.

Abdülaziz’ relative continues: “My cousin and other detainees protested. An uproar broke out. The prisoners were handcuffed in the back by the guards and taken to another location, out of view from the surveillance cameras. Where they were tortured.

The detainees were sent to hospital and have medical reports recording the blows received. My cousin Abdülaziz Tektaş has a head wound and a back wound. He also has a medical report. He called us on Tuesday February 1st to inform us.

My cousin and his comrades filed request, demanding that their letters be registered, but the administration is not communicating.

I only have the first names of two of the guards, Cihan and Uğur.”

Moreover, Arat Barış, informs that, during the incident, another detainee by the name of Serğebun was on the phone with his family and said: “Mamma, we’re still hearing cries, people are being tortured right now, can you hear them?”

Despite efforts by journalists and defendors of human rights, it has been almost impossible to obtain more information. This being the case, Gülüstan Kılıç Koçyiğit, a deputy of the Peoples’ Democratic Party (HDP) brought the matter to the attention of Parliament on February 4 2022.

She put the following questions to Bekir Bozdağ, recently named to the post of Justice Minister (on January 29 2022).

Needless to say, none of those question will receive any kind of response…

Even though the Turkish Parliament has become practically useless, the HDP, sole progressist party worthy of a true opposition, is muzzled, under threat of prohibition, and a number of its elected members and administrators in prison or in exile… Those of its deputees still occupying their ejectable seats in Parliament try to do all they can, as best they can…

It may be useful to summarize to what kind of Minister deputy Gülüstan Kılıç Koçyiğit was addressing her questions.

The Minister of Justice, Bekir Bozdağ is no beginner. He had already occupied this post from 2014 to 2018. During that mandate, more than judges and prosecutors were dismissed by decree, for “belonging” to the Brotherhood of Fetullah Gülen, a preacher, former friend and now current enemy n° 1 of Erdogan. The now new minister was also a suspect in the affair of illegal weapon shipments to al-Qaida and the subject of an inquest by the antiterrorist prosecutors in 2014 “for aiding and supporting” this organization.

Bekir Bozdağ’s affectation has brought to the forefront its load of scandals, notably his ignoble comments concerning a rape on a minor, “the little girl consented, the family agreed “.

There is such a thing as collective memory, and public opinion has not forgotten.

Numerous journalists and defendors of human rights relayed this case, notably on Twitter with the hashtag #DiyarbakırdaİşkenceVar and found themselves immediately attacked by the regime’s trolls. Here is one example of tweets by Dilek Aykan a member of the editorial team at Kedistan:

The prison of Diyarbakır has a sinister reputation dating back far before today. Even if the Amed gaol, prison N°5 has known refurbishments and changes of appellation running through the alphabet, its walls have echoed with the cries of torture for decades, under preceding Kemalist and nationalist regimes.

One should not be surprised if guards, encouraged by a penitentiary administration and a State with fascistic practices, renew with torture methods, especially since the gaols are crammed with political prisoner considered to be “State enemies”. Unfortunately, permanently denouncing this remains a current need in Turkey.

Leading photo: A scene from the film “Kanlı Postal” (Bloodied boots). The story in this film directed by Muhammet A.B. Arslan, released on September 11 2015, takes place in the Diyarbakır prison during the military coup d’Etat of September 12 1980.