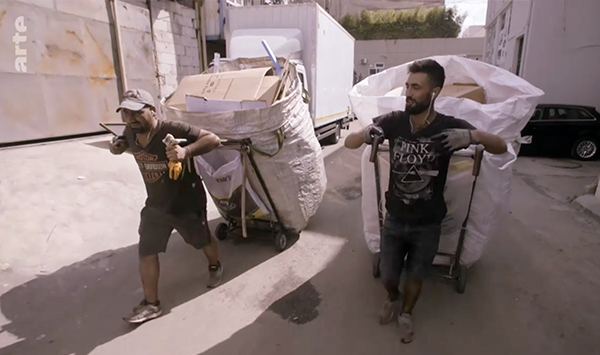 Available in English on arte.tv until October 2022, a thirty-minute reportage on Istanbul’s Rubbish collectors.

Filmed in 2021, this reportage draws attention not only to the labor of the collectors, their precariousness and the discriminations to which they are subjected, but also shows how the manna of recycling attracts lust and greed so that, under the guise of ‘regulations’, the Turkish State attempts to grab a wild public service it was not up to organizing on its own, in order to take advantage of future profits with which to grease the wheels of corruption.

Indeed, the bill “zero rubbish” for 2023, initiated  in grandiose style in 2017 and treated as the President of the Republic’s wife, Emine Erdoğan’s private hunting ground which she popularized in front of the UN in 2021, mainly aims at concentrating and securing healthy returns on recycling added value on rubbish in Turkey.

As everyone knows, the circular economy in the hands of capitalist globalization is more about upgrading the financial  value of rubbish circulating as a merchandise in a great world-wide movement and, finally, creating value leading to unequal developments in the global market.

The commercial value of rubbish is the main argument put forward, with profit accruing at every level of its journey across the world, for wholesalers, intermediaries, transportation firms, much more than the environmental interest of recycling, although this is the argument invoked as a green flag.

An eye on world statistics shows that the five countries surpassing or barely reaching the 50% mark on recycling are Germany, Austria, South Korea, Wales and Switzerland. Among those countries, up until some very recent decisions, Germany was also among the big “exporters”. With all this contributing to the figures of “growth”.

But this article is not an investigation on the circular economy. There would be so much to say about the use of virtuous concepts daubed in green paint by capitalism, the better to be diverted from their social usefulness.

A recent episode in Turkey sounded the alert, when the country   started receiving more rubbish than it produced while China in particular was closing its borders to world rubbish. Tons of rubbish landed in agricultural or populated zones, thrown there or burnt outdoors for lack of sufficient recycling infrastructures, and for lack of significant selective sorting in the exporting countries.

The “zero rubbish” in 2021 turned into a huge back-up in Turkish harbors also, in full pandemic, which did not help matters.

So now Turkey is shifting toward its “local production”. And the State has decided to concentrate on this sector. This is not about creating a vast public service for  treating rubbish and refuse, serving the environment, populations and the planet, but a scramble in order to seize the profitable  part of recycling and concentrating the value chain currently trickling into the informal economy.

Of course, no one can wish for the continuation of this “measly job” as rubbish collector. But destroying through repression this macro economy allowing for the subsistence of destitute workers, when the service they are providing to the public and the environment will not be replaced for a long time, is yet another demonstration of how savage capitalism and fascistic authoritarianism are allies.

This reportage focuses on a form of misery in Turkey cohabitating with insolent wealth, with its cohort of contempt and discriminations, on a cultural background where, luckily, solidarity is still present.

This documentary will remain available on English arte.tv until October 2022