Recycling the paper recyclers, for profit 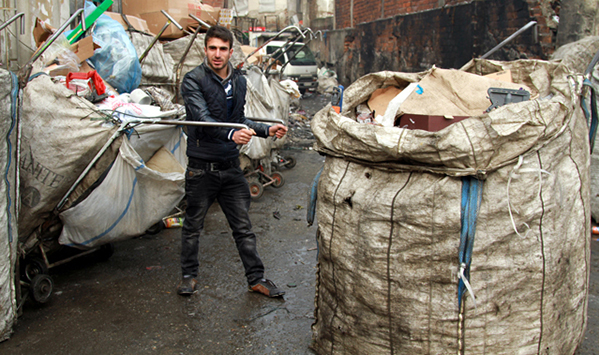 Some ten days ago in Istanbul, during an operation targeting warehouses of paper for recycling, the baracks in the Ataşehir neighbourhood were destroyed and material confiscated. In the Ümraniye neighbourhood warehouses were sealed off, and the material also confiscated. The few remaining opposition media in Turkey relayed “the arrest of close to 200 workers , taken into custody and of migrant workers sent off to retention centre prior to their expulsion.”

Mehmet Aytar who works in paper recycling in Ümraniye and Salman Yıldırım, a member of the board of administration of a recycling association, met with Haber Sol, a few days after these operations and the difficulties encountered by the gatherers.

At the time, Mehmet Aytar said : “The Istanbul prefecture reached a decision: all the contractors must get rid of the carts. Istanbul has 39 districts and 1 350 warehouses dedicated only to paper for recycling. There are also 260 big firms with licenses. Those without licenses bring their pickings to these firms, I work in Ümraniye Esenkent. There are 85 warehouses, and five or six big firms.

A few days ago, the municipal police, and teams of special police came, without prior warning at 10 am, along with armoured vehicles, and shovels. They confiscated all the stocked refuse. Three hundred, four hundred persons were there. We asked for an hour or two delay so we could pick up our material in the warehouses. The police’s answer was “you take your bag, and you leave”. And when people said “how are we supposed to leave, how can you confiscate our goods? Give us a bit of time” they were based and received rubber bullets. In the end, they sealed off all the warehouses and took our comrades into custody. They are proceeding to these operations one after the other. Following Ümraniye, it was Ataşehir’s turn.

Many people have been wronged; Some have four, five school-aged children. Thousands oe people make a miserable living here. How can the prefecture take their bread away like this? Currently, no one can work here. Everyone is afraid.  In any case, they confiscated most of the material and sealed off the warehouses.”

Mehmet Aytar underlined the fact that a few deputies and journalists had stood by the workers in paper for recycling and he added “we think we must find a solution to this problem. This can’t go on. We’re talking about the livelihood of thousands of people.”

In an interview in early October, Mehmet Aytar was already asking : “They are said to have set up an installation in Gebze, certainly linked to the “Zero Waste Project” headed by Emine Erdoğan. They say the seized material will go to City Hall, to the State. But one way or another, it goes to the State… To benefit the project of the President of the Republic’s wife, they confiscate the sweat of thousands of people. Are they not citizens of the Republic of Turkey? Prior to elections, they come knocking on the doors of our association asking for our vote. And now? Only the wronged support the wronged. The wealthy are nowhere in sight.”

As for Salman Yıldırım; member of the administration of the recycling association “Geri Dönüşüme Katkı Derneği” he denounces:

“The prefecture conducted the closings using as an excuse that ‘the workers disturb the inhabitants with their carts and dirty the surroundings. In the neighbourhood where I work, they sent in the police in the same way. They attacked us, accusing us of irregular work or demanding licenses in an area where zoning does not exist. We gathered with our comrades of  paper recycling at Avcılar Yeşilkent, we organised to handle the problems. We created an association so that the municipality would finally deal with us. We solved our problems.

However in Ümraniye and Ataşehir, the prefecture makes the decisions directly, claiming the workers “pollute the environment’. These people sort through the garbage, transforming it into recyclable materials. They bring them to dedicated warehouses. And in that, there is money. There is a very real possibility to turn a profit. This is the reason and in the framework of the “Zen Waste Project” that the prefecture is attempting to haggle  over the business with allied firms. Taking advantage of Mine Erdoğan’s project, they are attempting to set up their own network. So the prefecture works at closing down existing firms, and people resist. In no way do the workers cause problems for the residents. This is just an excuse to open up a sector for (regime) allies. The townships base their decisions on those of the prefecture. They open bids, ten people show up, but the business is handed over to a member of the AKP municipal council, thus creating a monopoly in the sector.”

You were wondering why the gatherers were attacked suddenly,  That, in a few sentences, paints the picture.  Obviously,  even the country’s garbage isn’t for the poor…

Mashallah, the Erdoğan family is very active. With their different “sensibilities”, environment, education, women, thanks to each of its members, it develops foundations active in several sectors.

The daughter Esra Erdoğan Albayrak is on the board of TÜRGEV, the Turkish Foundation for Youth and Education Services which presents itself as “a not-for-profit organisation providing dormitories and educational services for girls”. The young son, Bilal Erdoğan is an hyperactive member of the board of the “Turkish Foundation for Youth” TÜGVA, dedicated to youth and students. Sümeyye, Erdoğan’s clever daughter is the vice-president of KADEM, a civil society  claiming to be “involved in the defence of women’s human dignity”. The wife, Emine Erdoğan, leads  the “Zero Waste Project” the foundation of which, TEMA (The Turkish Foundation for the Fight against Soil Erosion) and the TRT (Turkish raid-television) are partners and which is directly linked to the Ministry of Environment and urbanism…

And this is how little family “enterprises” are shared with allies. In any event, they will never lack cheap slave gatherers how ill handle the garbage in order to turn a profit for them…

Recycling can bring in important revenues, and it seems like a shame to leave this to “rag pickers and gatherers”. Using them as cheap labor to be handled at will, the ones who knew the business well before the age of “zero waste” which appears as modernizing the sector, but it nothing other than one more capitalist securing of a return, causing further  hardship for those already in poverty.

One of the paper forcats responds in his own way, with a poem by Ahmed Arif. You will find the translation below the video.

I gave cradles to Noah,
Swings, hamacs,
Eve, your mother is only yesterday’s child,
Myself, I am Anaolia,
Do you know me?

I’m ashamed,
Ashamed of the poverty,
Naked before the stranger, in the light of day…
My buds are cold,
My land cries out in famine.
In the world of brotherhood, of work
In the world of solidarity
In a wolrd where atomic petals open,
In a world of poets, of scientists,
I remained all alone,
All alone and far.
Do you know?

They miled me for years.
With their knights, they broke me
Of delicate morning slumbers
Sovereigns, assassins, brigands
Paid me pay the tribute.
I don’t care about Alexander
The shah and the sultan.
They disappeared without leaving a shadow!
I saluted my friend
And resisted…
Do you see?

If you knew how much I love
Köroğlu,
Karayılan,
The unknown soldier…
And also Pir Sultan and Bedrettin.
And there is so much love
That the pen cannot write it all…
I you knew
How they loved me also.
If you knew how the one who shot bullets in Urfa,
From the minaret, from the barricade,
From the branch of the crypress,
How he smiled at death.
I absolutely want you to know,
Do you hear?

Don’t destroy yourself in this way,
So sad, so strange,
Wherever you are,
Inside, outside, in class, at your desk,
Walk on,
Spit in the face of the torturer,
Of the opportunist, the corrupter, the traitor.
Hold on to the book,
Hold on to the work.
With everything, your nails, all your teeth,
With all your hope, your love, your dream,
Hold on, do not shame me.