From Rojava to the Basque country: The road of solidarity 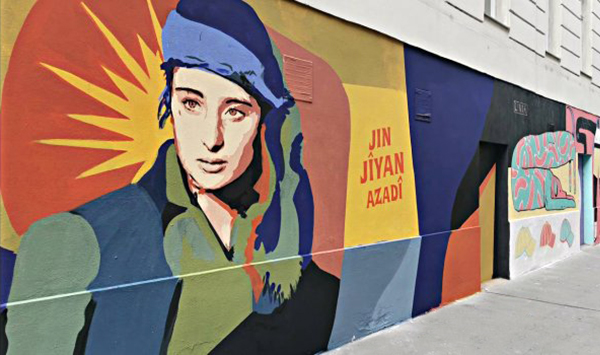 The term “inner migration” has landed on my tongue. It has been like this since my trips from Istanbul toward Amed (Diyarbakır).

At the moment, I’m at the Bercy bus station in Paris, as if undertaking a similar journey. Of course, the landing point will not be Amed, but a small town in Southwestern France. I’m travelling thus toward lands the Basque call “Euska Herria”, the French call “Pays Basque” and that we Kurds call “Welatê Bask”.

As I was preparing for this trip, I was questioning myself. One finds fresh sources in people’s history, in what they tell us. Interest in a people involves listening to their tales.

I leave behind me the turmoil of Paris, a year-round condition. Along with Hasan carrying his  film and his photo cameras, we leave on this bus ride that will last the whole night.

We arrived in Bayonne in the early morning. The town was wrapped in fog. The tiny ancient stone bridge linking the train station to the downtown area, known as “Petite Bayonne”, was almost invisible. But there was nothing glum about this fog. Quite the opposite, far from Paris, it appeared as a chance to take a deep breath.

In this town, resting on the shores of the Atlantic Ocean with its long beach embraced by forests, the first invitation is to travel with your nose in the air, taking in its magnificent architecture. Whether we want to or not, we can’t pull our eyes away from buildings that all have a tale to tell, a history, a soul. The regional architecture speaks to those who built it over the years and who still live there nowadays. On the streets lined with century old buildings, you can’t avoid stepping on toes as your eyes slide along the upper storeys before reaching the sky… These ancient buildings change colours, from one town to another. But this red suits Bayonne so well.

After a break by the side of the river that runs across the town, in a café where the morning brings the day’s first “bonjour”, we take our seats in the last row in another bus, leaving for a lovely two-hour ride.

We leave Bayonne, on the way to Mauléon-Licharre.

They say the cows watch the trains go by but, in this case, we are the ones watching them stream by. There are also sheep, horses enjoying the pastures in the hills and mountains of a deep green, each one like a painting. Nostalgia grabs at me, once again.

In the Basque Country, like an air of Kurdistan : Leader Öcalan, Arîn Mîrxan and the YPJ flag

Once in Mauléon-Licharre we walk for a while to reach the location of the festival, reason for which we considered travelling to this place. It is set to run over four days, from October 7 to 10. Lucile, who was part of the organisers of this initiative had told me from a distance how an old factory had been transformed into a cultural center over here. This festival allowed me the opportunity to visit it.

We pass City hall where we run across “Lulu”, Monsieur le Maire, and head for the cultural center.

The complex consists of three stone and wood buildings, standing side by side. There, I find Lucile and her colleagues, working away with enthusiasm. We are greeted by YPJ flags, hanging on both sides of the great wooden door, and human-sized cardboard printouts of Leader Öcalan and Arîn Mîrxan, a revolutionary Kurdish woman.

On the front of the cultural center, there is an outside exhibition with panels written in Castilian and in Basque. Photos of Rojava, notably of the Academy of Women and Jineology. Already in these first steps, one can find traces of the ancien journey, already carried out by Basque men and women, on a group  photo, next to a welcoming panel from Afrin : “Hun Bi Her Hatin”.

During this four-day festival women from the Southern part of Basque Country will share with all their heart their strongly-felt common political viewpoints with Rojava, their strong sense of solidarity.

A rich program awaited us in Mauléon:

The festival is intended as “a celebration of the diversity and richness of the population of Mauléon, a homage to a past marked by exile, welcome and  a mixing of cultures, the opening of spaces for exchanges, offering  as many openings on future perspectives”. This first edition has a guest of honour: Pınar Selek, sociologist and writer.

In a festival where none of the organisers are Kurdish, such a solid focus on themes such as the resistance of the Kurdish women of Rojava, Jineology, the YPJ, the Academy of women, could not have come about without the existence of a very strong link of solidarity.

In the coming days, I will share with you interviews we conducted with some of the people who took part in this lovely adventure..

During this festival, highlights of the work of Kurdish artists such as Zehra Doğan, showed Kurdistan’s resistance  alive on walls at the other end of the world.

“Prison n°5”, the graphic book by journalist and artist Zehra Doğan was realised secretly in prison, its pages  exfiltrated clandestinely, one by one; the book was published in the spring of 2021 by Editions Delcourt in French and simultaneously in Italian by Becca Giallo publications. The book relates the period of exactions by the Turkish army during the years 2015-2016, along with the history of the Kurdish people’s struggle and the daily life of the prisoners. There are now twenty enlarged reproduction of original pages, available for exhibitions by associations, bookstores, libraries. And this small exhibition began with its first stop in Mauléon… The twenty reproductions are here, before your eyes.

From exhibition to meetings to exchanges, from film screenings to shows, music also plays its role in uniting people…

In the evening, on stage we find the Basque group, the Trio Daraçiyê, one member of which is the Kurd Haydar Işcen. As for Yohann Villanua, he moves us when he sings “Şevekî tarî, bi berf û baran” in Kurdish, and brilliantly. We, together and reunited, Kurdish, Basque, Armenian, Arab, French, Spanish, Turkish, Portuguese comrades, testify to the transformation of the path taken by solidarity into a highway that extends from the Basque Country all the way to Kurdistan.

The concert by the collective Medz Bazar is also a whole mosaic of colours. Words stop and the melodies take over.

Finally, even if I started out saying this journey “would not be one where the final stop would be Amed”, these reunions took me back instantly  all the way to Amed.

During these four days, I had exchanges with many people. All of them are closely related with Kurdistan and Rojava and with their very heart… A bridge is established crossing all borders, heart to heart. It is impossible here not to wonder “am I in Mauléon-Licharre, in Linchans-Sunhar or in Amed, in Cizre, in  Afrin?”

You see, someone walks somewhere, he or she leaves footsteps, yes? Then, others follow these steps and a trail appears. This road is then easier to follow because everyone knows it leads somewhere.

In Rojava, all of the people followed in the steps of Kurdish women. The trail they opened transformed itself into a road. Now, people who belong to other peoples in the world will follow tin full trust in their turn…