Turkey • A barely disguised crime against the Parliament 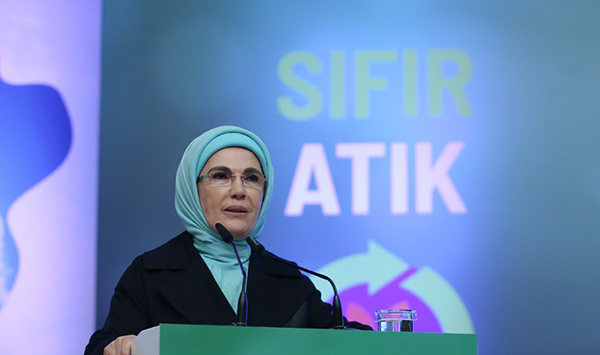 Climate change in Turkey has now translated into facts. It just set off a tempest in a teapot.

Since Turkey had to have its anti-Covid vaccine, its own drones, its nuclear power stations, its gas, its gigantic airport, its bridges, of course it also had to express its position about the environment.

No, don’t think that suddenly, various extractions using cyanide will stop, or the destruction of Turkey’s hydrology in favor of laying down concrete, or that landscapes will be protected from destructive infrastructures… Please. We’re not in dreamland!

No, I’m talking about a bill of law in order to disguise all that, presented between the prayer and dessert to Dame Emine, renowned specialist before the Almighty on nature and its laws.

So an AKP deputy, Selman Özboyacı offered a proposed so-called “environmental” bill to the first lady, prior to its discussion in a general meeting at the Assembly. No doubt was he anxious for the support from a family’s whose concern over ecology is well known. This was all it took for our democrats to take umbrage through the voice of the CHP deputy for Izmir, Murat Bakan, who ranted about the denial of democracy this represented, as if Erdoğan were deciding policy without consulting the Parliament… If someone would kindly inform him that the Reis does whatever he wants in all matters, we might be spared this kind of entertainment.

But there you have it, when it comes to lifting the immunity of HDP deputies, the CHP is in the habit of voting… this must be what made him think he was deciding something in this country. Oh well, deputy Murat Bakan is not the worst in this type.

Exchanges and stormy outbursts followed therefore among elected ones, concerning the Parliament’s “institutional prerogatives” . You don’t mess with the Constitution, by golly!

But this did not put an end to the opposition deputy’s ire, even if a careful examination of the projected bill doesn’t reveal anything to upset him so. This project has already been “discussed” in a commission, without causing any hubbub. What angers these deputies then, is that the Calif’s wife should meddle in their arrangements, much more than the content of the arrangements themselves.

When the time comes to cut water supplies to the people in Northern Syria, these democrats are less particular. When it comes to drowning Kurdish culture in the name of progress for the Nation, these democrats mumble a few words of regret for the record. When it comes to building “summit roads”, depending on whether they hold interests in the paving or not, our democrats doesn’t raise much opposition… And matters of ecology, like everything else, are discussed in terms of the nation’s growth and progress.

By the way, why is Dame Emine of Turkey embroiled in this issue?

Because, you see, she realized that all the “first ladies” had to take on “causes of general interest” and that this could not be limited to supporting the market for major brands and crocodile-skin handbags. Which is why in 2019, a program she animated presenting the “Environmental Ethic Project” was organized around the theme “zero garbage, zero waste” and held at the Religious Affairs Presidency, with the participation of the President Recep Tayyip Erdoğan and of the President of Religious Affairs, Prof. Dr. Ali Erbaş.

Emine Erdoğan had underlined the fact that “mosques had a wide communication network that could allow to raise awareness in the citizens concerning the environment”.

“These are only symptoms of the illness. We must look within for the causes that have led to this condition, and then led to the disappearance of the environment. If we do not succeed in winning over the refined spirit of the Muslim, we will only be able to treat the symptoms of the illness. When we obey the commandments and the prohibitions of this beautiful religion, we expect that the most ecological school in the world, and the persons best defending the rights of animals will come from this community. Unfortunately, we see this is not the case, according to research done in 2010. 2,5 million Hadjis perform the pilgrimage, leaving 100 million plastic bottles in the streets. Unfortunately, when it comes to the environment, what Islam has to say on environmental ethics is not sufficiently heard on the international platform.”

After declaring that the life and behavior of the Prophet Muhammed toward nature and animals was not sufficiently known, Emine Erdoğan continued:

“If waste has become our daily practice, this means we do not know the Prophet’s companions sufficiently. This means that we have not taught our children to be content with what they have. Contentment leads to durability. I hope that the next step in this beautiful project will be to present Islam’s ecological identity on the international platform. We expect from our Religious Affairs Presidency an ecological organization of the pilgrimage that will serve as a good example in all Muslim countries. Apart from organizing an ecological pilgrimage, Turkey can be the leader of the Muslim community by publishing manifestos about animal rights, zero shortages, waste, zero garbage and sustainable development”.

“Avoiding waste is not only about reducing the amount of our electricity, water and gas bills. Wasting one kilo of bread also means wasting the 1,6 liters of water used to make this bread. Wasting a cotton T-shirt also means wasting 2, 700 liters of water used in its production. We are not only responsible for our faucet, our lamp bulb, our table, we hold the responsibility of being Calif’s to the earth. If we managed to explain correctly to our children that the children in Africa fall sick because they cannot find clean water, we would succeed in making them understand that one slice of bread is much more precious than flour.”

Here, we are reaching the heights, perhaps even Paradise. The little people must stop complaining over their bills and throwing out bread. She didn’t mention how many servants were responsible for turning off the faucets in the Palace.

All right, Greta and Pinocchio have their work cut out for them, she/he now have a serious competitor, straight from cloud-cuckoo-land.

Still, we can be sure of it, back in 1924, no one would have thought of presenting a project to Latife before Mustafa Kemal had approved it.

Headline image: The First Lady Erdoğan, at the launch of the “Zero Waste-Zero Waste” project, March 2019.