Game of Drones • And the winner is? 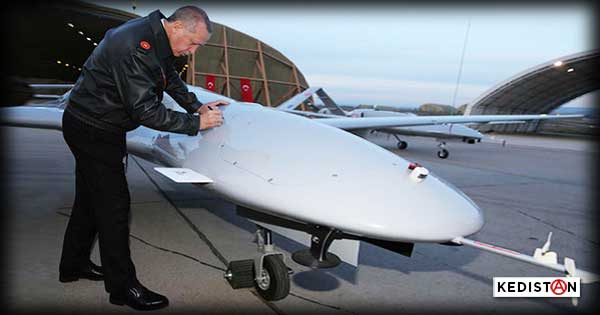 Turkey isn’t the only one droning along, so is Trump.
And our Erdoğan who is showing off because he’s introduced by marriage a drone expert in his family should be careful, given such friends.

Boom! A special military old fogie somewhat responsible for killings both inside and outside Iran has exploded. In Spain, when a certain Franquist Carrero was slightly dynamited by the ETA, a slogan of the time said “And up you go, higher than Carrero”, with accompanying hand gesture.

Visibly, this is not what inspired the thousands of demonstrators in Iran and in Irak who marched against the one guilty for this dronesque attack.
Trump gave a war fart and everybody laughs. This is the point we have reached.

It almost stands to reason following the adoption of a law of quasi-prohibited entry of travellers from countries where Muslims are said to constitute a majority…Not all of them, that is, Erdoğan strutted around over there not so long ago.

And this may even be the moment when he received the green light to sign an agreement with the Libyan moneymen in power, allowing him to participate in the reinforcement of the total mess that reigns down Tripoli-way.

So now, everyone give war a helping hand

Putin should take advantage of the Open Bar since everyone is joining in for a power play. Beautiful Europe being busy with its finances, its border closings against migrants and rising fascistic opinions, now’s the time to launch your own drone. “Easy now, she said, no escalation”, and everyone went back to domestic matters. This will become tempting for those sleeper cells of Islamist Chiites…

You might almost forget that a bit all over the world, peoples are out in the streets against their local corrupted ones who feed off global corrupted ones even more capitalistic than they are. Or rather, you might worry that their response begin with a game of drones.

Nowadays, wars are carried out with the help of drones and mercenaries, both stateless, always in league against the same ones, those populations aspiring to a real life and to whom death is delivered instead.

And oh, Happy New Year by the way. And wishes of good health above all.