Turkey continues the practice of deporting prisoners to penitentiaries hundreds of kilometers away from their families. Yet, a recent decision by the European Court of Human Rights, has condemned the country for “violation of respect for family life”…

In October 2019, the ECHR (European Court of Human Rights) rendered its decision concerning the appeals by Abdülkerim Avşar and Abdülkerim Tekin, and sentenced Turkey to 6 000€ indemnities for each of the prisoners. But despite this decision   establishing jurisprudence in the matter, signaling that prisoners should be transferred to prisons close to their homes, Turkey continues as before to practice its policy of deportation, a method designed to persecute through isolation.

In penitentiary jargon, these deportations are called “exile transfer” or “banishment”. They are often practiced, with no preliminary word given to the prisoners’ lawyers, their families, or even the prisoners involved in the transfer. The usual motive is often that of “lack of space”. This lack of space is undoubtedly real, for Turkish prisons never empty of male and female politicians, intellectuals, academics, writers, journalists, students, activists. But with the deportations from one town to another and vice-versa, an odd and destabilizing “turn-over” is maintained.

This has only one purpose: isolating prisoners

We had mentioned this topic in the urgent cases of the sick detainees, Devrim Ayık and Celal Şeker, who died in prison, unfortunately. And in November 2018, our friend and colleague Zehra Dogan along with 20 of her prisoner friends were also deported some 570 km away from their families. 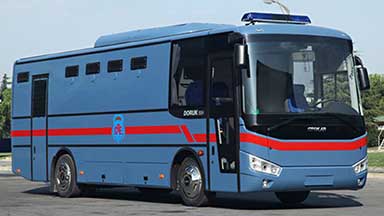 The “transfers” are done in vehicles called “rings”, the interiors of which hold cells. The prisoners are handcuffed and subjected to journeys of several hours, with no stops. When a transfer to a hospital is done in such a vehicle, the trip is such hell for the detainees that most of them prefer not to make the request. Aslı Erdoğan mentioned this in the early part of 2017, in an interview following her liberation, using the following words: “They force you into this horrible vehicle, the ‘ring’. I have never seen anything as inhuman as this vehicle.”

Below, I present cases of men and women elected members of the People’s Democratic Party (HDP), co-mayors in Kurdish towns in Turkey. Some of these names may sound familiar, others, not.

If I insist on giving all the names that follow, like in a litany, it is because it is important to remember that, transformed into figures, and under the artistic blur of statistics, one always forgets the human beings involved.

A fresh wave of purges began on August 19 2019,  dismissing elected co-mayors  of the HDP following the local elections on March 31 2019, and sending them to jail. Of the 65 city halls won by the HDP, the co-mayors of 6 localities were refused the right to exercise their mandates, using as a pretext that they had been  “dismissed” by a decree with force of law (KHK).

The co-mayors were replaced by administrators named by the State. This practice rests on decree having force of law KHK N°674 promulgated on 15/8/2016, under the State of Exception (OHAL). Yet, jurists, lawyers and Bar associations have denounced this practice and filed appeals, specifying that it is illegal since the decree in question is in total opposition to the terms of the Constitution.

To date, 32 co-mayors have been dismissed from their duties and replaced by “administrators” named by the State.

27 of the co-mayors were arrested, only 3 of which were liberated very recently : Mehmet Fatih Taş and Fatma Ay (co-mayors of Kulp), Semire Nergiz co-mayor of Nusaybin. Thus far, 24 co-mayors are still incarcerated.

Long journeys with no stops, and handcuffed

Selçuk Mızraklı was arrested on October 22 for “belonging to a terrorist organization” at the same time as Keziban Yılmaz, co-mayor of Kayapınar (Diyarbakır district) and Rojda Nazlıer, co-mayor of Kocaköy (Diyarbakır district). Four days later, the three political detainees, incarcerated in a Type D prison in Diyarbakır, were transferred to the prison of Kayseri Bünyan, 563 km away.  And yet, their trials are being handled by the Tribunal in Diyarbakır!

From Van to Osmaniye

As for Yıldız Çetin, co-mayor of Erciş (Van district), also arrested on the same charge, after a brief stay in the Van prison, he was transferred to the prison of Osmaniye, which is to say 791 km for his town of residence.

From Erzurum to Ankara

Melike Göksu, co-mayor of Karayazı (Erzurum district) arrested on September 17 2019 for “belonging to a terrorist organization” crossed over half of the country, being transferred from the jail in Sincan to Ankara, some 1 027 km away. Her trial continues in Erzurum while the elected member remains imprisoned in Ankara.

From Hakkari to Elazığ

On September 18 2019, it was Cihan Karaman’s turn, co-mayor of Hakkari, and of the co-mayors of Yüksekova (Hakkari district), İrfan Sarı and Remziye Yaşar. Arrested in their homes, for “belonging to a terrorist organization”, they were sent 631 kms away, to the prison in Elazığ. Their trial continues in the Hakkari tribunal.

From Van to Erzurum

Following raids on their respective homes, on November 11 2019, this time the co-mayors of İpekyolu (Van district) Azim Yacan and Şehzade Kurt were taken into custody then incarcerated on the familiar charge. The two elected members were incarcertated first in the prison in Van, then transferred to the prison in Erzurum, 378 km away. You guessed it, their trial continues… in the Van tribunal.

You certainly remember the bomb attack perpetrated by ISIS on October 10 2015 in Ankara during a meeting “for peace”. This attack left 109 lifeless bodies strewn about in front of the Ankara railroad station. During this attack, Hatice Çevik, co-mayor of Suruç (Urfa district) lost her daughter and her daughter-in-law; she was arrested on November 12 2019,  as always under the usual charge of “belonging to a terrorist organization”. Neither did she escape from the distancing transfer, as she was sent from Urfa to Tarsus, some 420 km from her home.

Group ticket for Tarsus some 500 kms away

All of them women, all of them elected in Mardin districts, all of them accused under the  usual catchphrase of “belonging”. Their trial continues in the Mardin Tribunal. They were transferred to the prison in Tarsus. For Gülistan Öncü, this represents a transfer 442 km away from her home, for Nalan Özaydın, 583 km, for Mülkiy Esmez, 651 km and for Nilüfer Elik Yılmaz, 572 km.

From Muş to Maraş

Ülkü Karaaslan, co-mayor of Varto (Muş) arrested on December 18 2019 during a raid on her home under the same pretext, was transferred from Varto to  the prison of Osmaniye, some 692 km away. As for Adnan Topçu, co-mayor of Mus arrested on the same date, he was sent to the prison in Maraş Türkoğlu. Need we add that their trial continues in the tribunal in Muş?

On December 23 2019, Filiz Buluttekin and Cemal Özdemir, co-mayors of Sur, the historical neighborhood of Diyarbakır, arrested in their homes and incarcerated for “belonging“, again, were transferred – such luck – only 317 km away toward a prison in Erzurum. The inquest by the Diyarbakır prosecutor, is currently underway…

I’ll stop here this repetitive exercise, which, however, concerns only a few emblematic cases and is the daily reality of repression in Turkey.

No answers to appeals

Sidar Avşar is the attorney representing prisoners Abdülkerim Avşar and Abudülkerim Tekin whose appeals led to the condemnation of Turkey by the European Court of Human Rights.

He declared that, despite the four months since the Court’s decision, it has not been respected. He adds that, following this decision, as a matter of jurisprudence, other appeals were filed.

None of the demands by the families requesting the transfer of their relatives in establishments close to the place of residence have succeeded.

“So far, our appeals have received no response. Concerning our unanswered appeals beyond the 60 days of the legal delay, we have opened trials in administrative tribunals. These are still underway. Therefore, we cannot yet say that the State is respecting the decision reached by the European Court of Human Rights.”

As a reminder, relatives of Figen Yüksekdağ and Selahattin Demirtaş,, ex co-presidents of HDP, must travel thousands of kilometers in Turkey in order to visit them. Selahattin Demirtaş is incarcertated in the Type F prison in Edirne. He is under trial in Istanbul and in Ankara. His family resides in Diyarbakir, 1569 km from Edirne prison… As for Figen Yüksekdağ, she is detained in Kocaeli prison. Her family resides in Istanbul. She is under trial in Ankara.

These are only two examples, along with those of the HDP co-mayors, chosen among the names better known in international public opinion…

This practice of deportation or “banishment” is pernicious. Distancing from the family, the breadking of social bonds, creates travelling difficulties along with financial problems, it requires sacrifices and provides a bonus in weakening the resistance of deported prisoners. Not only are they isolated in human terms,   but it also creates the need to use audiovisual means for hearings, another type of isolation…

The videoconferencing system, SEGBIS, is imposed on prisoners who “cannot” be physically present at their trial (or who were deported so they could not attend).

Need we remind everyone that one of the principles of Justice is the right to being judged ‘face to face” and with direct means of expression. The forced use of the videoconferencing system is nothing other than a confiscation of these fundamental rights for persons on trial. For, in concrete terms during a hearing taking place in the absence of the accused, he or she cannot control the accusations, nor physically see the evidence being produced. He or she can only see the hearing room through a small screen, and only during his or her period of personal intervention. If the connection fails (following a power failure, or a purported one), the hearing continues and the judgment becomes a judgment by default, outside the will of the accused.

Moreover, since the accused is not physically present by the side of the defending lawyer, he or she cannot communicate with the lawyer, nor request to look at a document. The fact the accused is absent at a hearing where the plaintiff is present, goes against the principle of  a “level playing field”, one of the elements inherent in the notion of an equitable trial.

And solidarity from the outside?

As you can well imagine, deportations from one prison to another, added to the “window dressing” liberations that sometimes only last for a few days, as was the case for Ahmet Altan to mention only his case, create an ignoble and complex game of jailhouse musical chairs, magnifying to an incredible degree the difficulties for those on the outside who attempt as best they can to support their jailed friends and relatives.

Who is in which jail in Turkey at the moment? Where should we send cards and letters? Thus the perverse practice of prison deportations overflows on the outside, weakening expressions of solidarity.

Be stubborn too. Support political hostages! Write to them.

This is the best way to abolish kilometers, borders and every method of inhuman isolation.

Here is a non-exhaustive list of political hostages in Turkey, which we attempt to keep up to date, as much as possible…