“With its new appearance, Hasankeyf awaits its visitors” 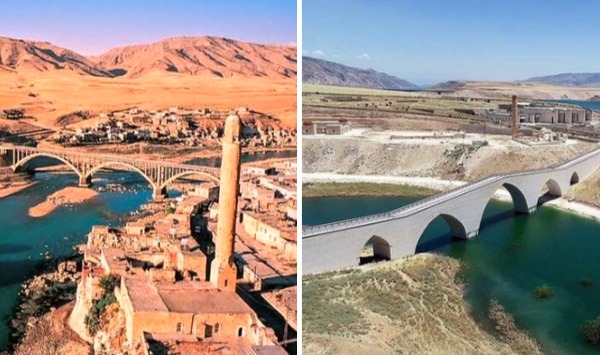 “With its new appearance, Hasankeyf awaits its visitors” the Turkish regime announces in those media standing at attention.

Did Hasankeyf, the 12 000 year-old relic, the cradle of civilization, truly need a “new appearance”?

You have transformed humanity’s heritage into a vulgar concrete dam flanked by suburban housing. 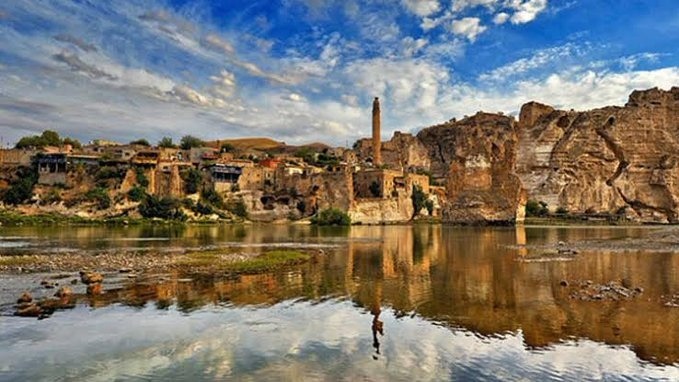 Do you really think that “tourists” will will “attracted” by your concrete horror? Just as your simulated video during you pre-construction communication campaign “prior to the building of the Ilısu dam” already suggested, will vacationers congregate there to practice water sports?

You are the one with your sails filled by the wind of insatiable ambition, you are the one surfing full speed ahead on profits and, here, in Hasankeyf, you are sailing five miles above History.

You dry out, you drown, you cover in concrete, you destroy every beautiful site in need of preservation. You demolish everything you touch with your corrupt hands, using your invention called “privileged calls for tenders” open solely to those firms who are your allies, abusing the public-private system by selling, giving away, offering gifts plundered out of what belongs to the people.

You send your firms, your machinery, into urban zones as well as rural ones, in the name of a so-called “rehabilitation”; a massacre you present as an “improvement”. And when the locals who wish to protect their ancestral treasures stand up to you, you send in your “security” forces, in order to secure your designs.

Because, in your view, civilization and progress take the form of concrete and bank notes…

Once you’ve extracted your profit, you leave behind to the people dried out rivers, sterile lands, razed forests, mountains sealed in concrete. 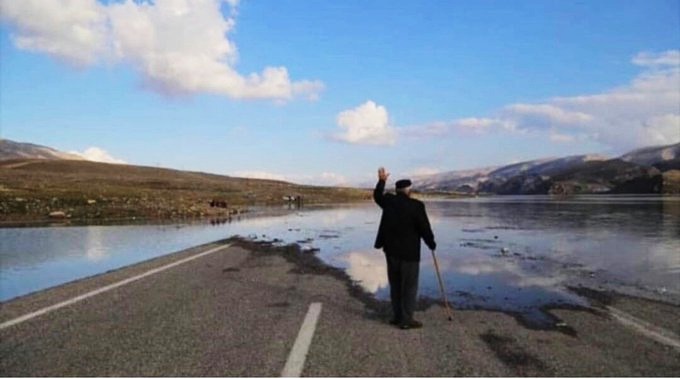 What gives you the right to bequeath to future generations a devastated landscape and a ruined memory?

And like a trophy, you show off all the disgraceful results you have created.

Do you really think that this portrait of plunder escapes notice? Do you believe that here, no one will notice that you willfully destroyed a section of Kurdish history on these lands? Do you think everyone is blinded by your upstart bourgeois populism, bigotted and totalitarian?

Do you believe that the yayla you have annihiltated, the devastated forests, the ransacked lakes, the rehabilitated relics have become “beautiful”? Your outsized megalomanical projects, the nuclear and hydroelectric stations, the walls you build out of enmity are truly useful? Really?

Is it with a childlike belief in your power that you keep trotting out the beneficial aspect of your projects, solely in order to convince yourself? Are you truly convinced? Or are you just pretending…

Everything you touch is then deprived of beauty. Not only do you rob the sites of their poetry, but you confiscate their memory, the people’s sacredness. Everything your hands “restore” becomes a ridiculous concrete cartoon of the original.

A few relics are transferred elsewhere…Last in line was the El-Rızk mosque, under the tears of outraged inhabitants. December 16 2019 – Mezopotamya Ajansı

If truth be told, you are in tune with the times.

When examined from a wider angle, you are among the “best” of the hoodlum destroyers on the planet – a miserable hord active on all continents, unfortunately. You keep on repeating this is a “great country”, that you are one of the “great world leaders”. Indeed, deeply rooted in the current system, you suck the sap out of the earth and all that lives like every self-respecting predator. Your success is undeniable. You can go on displaying your trophies sticking onto them, as usual, a Turkish flag as a G-string.

Do you ask yourself sometimes, when facing a mirror, if your trace will be inscribed in humanity’s memory? How will you be remembered.

To see this “new appearance” of Hasankeyf, now gone forever, is like dying…

At my age, with a need for reassurance, one tends to look back on “what was better before”. I am not one for that kind of conservation. For me, precisely, the past is a heritage that encourages us to do better. A people’s culture is not some frozen archaism of an unsurpassable tradition, but luggage in order to travel further and be amazed by new discoveries. It’s a transmission toward youth, so that it will fashion a new world out of it. And here, to see one of the family’s pearls drowned and covered in concrete by political wheeler-dealers who claim they want to return to Ottoman values while showing off the worst of cartoons, makes me want to puke.

It is both the expression of a nationalism practicing genocide on other cultures and in the coarsest sense, the expression of a mediocre understanding of the future, of a “progress” poured out in destructive concrete and the pseudo glitter of a tacky civilization, in the era of capitalism covered in Turkish gravy.

As a final look at Hasankeyf, a “lament” in the beautiful voice of Kurdish singer Aynur Doğan.