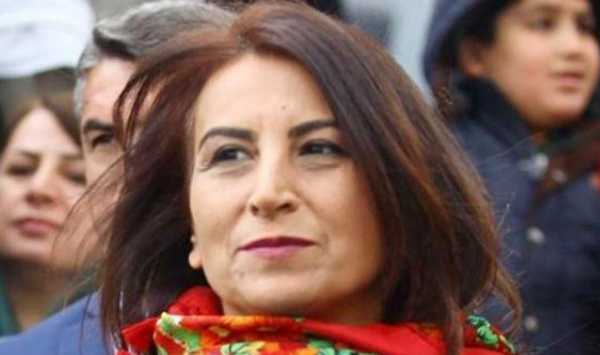 The Kurdish politician and ex-deputy, Aysel Tuğluk is in prison. Aysel is ailing. Aysel can no longer remember. According to medical specialists, she can no longer live without assistance. Serving her sentence must be postponed. Yet the Legal Medicine Institute has decided to keep her in prison.

Aysel’s memory is fading away, little by little. But we remember…

We remember that, during long years, Aysel worked as an independent lawyer. We know she was a member of the Board of Administration of the Foundation for Social and Legal studies (THAV), a member of the Association for Human Rights (IHD). She founded the YKD, with women who love their country. We have not forgotten that she was Co-President of the Democratic Society Party (DTP) from 2007 to 2009, elected as deputy for Diyarbakir from 2011 to 2015, deputy for Van of the Peoples’ Democratic Party (HDP) in which she held positions of responsibility, particularly on matters of Law and human rights.

We remember as if it were yesterday, the day of December 29 2016, when Aysel was arrested at a time when she was Deputy Co-President of the HDP. The bill of indictment was based on her work and declarations dating from her Co-presidency of the  Congress for a Democratic Society (DTK), a platform of Kurdish associations and movements in Turkey, one developing since 2011 its model of “democratic autonomy” as the organization forming its confederal summit. We remember…

We remember that Ankara’s Penal Tribunal N° 17 sentenced Aysel Tuğluk to 10 years in prison, on the usual accusation used  without moderation, that of “belonging to an illegal organization”. Despite all protests and requests for judiciary procedures, this sentence was confirmed by the Court of Appeals.

And we also know that, recently, in the context of the inquest conducted by Ankara’s Prosecutor’s Office concerning the events in Kobanê on October 6-7-9 2014, the arrest against Aysel Tuğluk was ordered.

Finally, reality is before our eyes: Aysel Tuğluk has been behind bars since  December 29 2016. Which means that, thus far, it has been 5 years since she was thrown into the Type F prison of Kandıra in Kocaeli.

Aysel can no longer remember…

Because in recent periods, Aysel’s health has deteriorated more and more severely. She suffers from dementia and because of serious losses of memory, can no longer attend to her daily needs alone.  During an interview with Dilek Gül for Euronews, her lawyer, Reyhan Yalçındağ said: “Think of it this way: some activities must be done every day. Eating, drinking, attending to one’s care, speaking, writing, reading, are these not all parts of such activities? What is left when you remove some among them? A human being who cannot live without help from others…Imagine forgetting a number of routine occurrences during the day. How could you move forward by yourself? Is it possible? No, it isn’t. Moreover, even in this condition, she remains sensitive to certain things. She says there are other prisoners in even more severe conditions, and thinks that drawing attention to her case in the news could  be prejudicial to them”…

We remember that in 2017, Aysel Tuğluk witnessed the exhumation of the remains of her mother, Hatun Tuğluk.

After barely a year in prison, Aysel had learned of her mother’s death. She was allowed to attend the funeral.

It consisted of a funeral one could not wish on an enemy and perhaps the mind prefers to forget, secretly…

A burial subjected to violent racist attacks… First, a group of some ten people who attempted to prevent the burial. The close ones of the deceased attempted to carry on as best they could. Then, dozens of persons, informed in small groups, arrived at the cemetery, by car, by truck and by tractor. The family members, relatives and friends were then subjected to verbal aggressions, insults, threats which then became increasingly physical attacks, followed by gunshots in the air. The mourners, held hostage in the cemetery, their attackers preventing them from leaving and covering them in racist and insulting slogans – “We won’t allow the burial of terrorists here! This is not a cemetery for Armenians!” The police intervened. The family then decided to exhume the deceased and bury her elsewhere.

That was Hatun Tuğluk’s final calvary; she was buried the next day in Dersim.

And Aysel witnessed all this. Her lawyers, doctors and close ones say they saw how deeply she was affected by what happened and testify to her physical deterioration.   No need to be a specialist to know that such an indelible wound leaves traces, and the effect of psychic traumas on the body are no secret for anyone… The medical doctors are of the same opinion.

For approximately eight months, nine specialists from the Legal Medicine Department of the Kocaeli Faculty of Medicine examined Aysel and declared as one that she suffered from “an illness with a chronic evolution of a progressive nature” and concluded in a report in July 2021, “that there could be problems  in balancing the requirements of medical assistance and care with those available in prison, and that she could not maintain her life on her own in prison, and consequently, the execution of her sentence should be postponed.”

Based on this report, her lawyers as well as the prison administration requested Aysel’s transfer to Istanbul’s Medico-Legal Institute. Her family, her lawyers and supporters, human rights associations, raised the alarm on numerous occasions, insisting on the difficulty of maintaining her under carceral conditions. The few progressive media still surviving in Turkey talked about it. The answer came from Istanbul’s Medico-Legal Institute last September, specifying that Aysel “could still maintain herself on her own, that she could still serve her sentence under prison conditions, with the benefit of a treatment and the recommended regular ambulatory controls”…

Following this response, on September 3rd 2021, the Kocaeli Prosecutor’s Office turned down the request for the postponement of the execution of Aysel Tuğluk’s sentence.

I her reaction, her lawyer Reyhan Yalçındağ insists on the fact that this a “classic” in Turkey. “Unfortunately, the Direction at the Medio-Legal Institute does not postpone the sentences of political prisoners, even when there exists a report from a delegation of nine medical specialists…We have a Direction at the Medico-Legal Institute that squeezes the medical institution in the faculties of medicine, that denies them and that acts as if they were not medical doctors. It positions itself solely as a political department. It delivers reports far removed from medical ethics.” Reyhan also wishes to specify that: “Aysel Tuğluk informed us they conducted a very brief examination, that she found herself subjected to a less than pleasant verbal treatment and that the doctors had humiliating words. And the report in question was prepared in a day, immediately after this brief meeting. One the one hand you have a report resulting from examinations conducted over eight months and on the other, a report hastily put together after a meeting of a few minutes.”

Aysel Tuğluk’s lawyers solicited the Foundation of Human Rights of Turkey (TIHV), requesting an alternate report. The TIHV has indeed pointed out the presence of important contradictions between the two reports, the need for a re-examination by the Medico-Legal Institute. Reyhan Yalçındağ specifies: “This report also exists and the Ministry of Justice is perfectly aware of it. Despite everything, the decision to carry on with the sentence is there. We are not told yes or no, everything is frozen.”

She ceaselessly calls on the authorities to be reasonable: “Once again, we ask that not one more day be lost. Turn toward medical ethics, toward morality, toward science and the Law. Accept our requests. And after the necessary examination of Mrs Tuğluk, prepare a report adapted to her condition so that the execution of her sentence may be postponed.”

One case among hundred, brought to our attention. Sick prisoners are many in Turkey. Some already suffered from pathologies that were aggravated by the conditions of their incarceration, for others, gaol caused the appearance of  disorders and ailments. In all cases, the answer from the authorities is that of the double sentence, except in the extremely rare exceptions when prisoners are liberated just before their death.

This is in direct application of a fascist and authoritarian ideology concerning incarceration in Turkey for those who protest against the regime. And this ideology, under the facile and elastic alibi of “anti-terrorism”  borders at a minimum on inhuman situations, barbaric ones in all cases. And it gains ground in minds well beyond Turkey.

Having Aysel Tuğluk leave prison means refusing ordinary barbarous criteria applied to security. Publicizing her condition  is not only helping those working at her liberation but it also consolidates somewhere the remaining humanity required in the struggles against the regime in Turkey, and, by extension, against all the fascisms now emerging.

International associations for human rights must take hold of this case. This is our reason for putting it forward.