Turkey sets in motion the closing down of the HDP Party 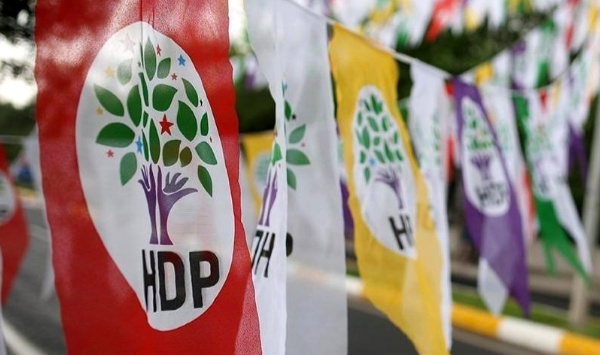 At its session on June 21 2021, the General Assembly of Turkey’s Consitutional Tribunal proceeded to a first examination of a second indictment calling for the closing down of the People’s Democratic Party (HDP). This indictment was unanimously accepted.

Thus does the “affair” take shape, following months of hounding, and efforts by the regime and its allies to demonize the HDP by every mean imaginable…

They underlined the fact the constitutional tribunal had missed a historical opportunity to fundamentally reject this indictment and that refusing to do so proved injurious to Turkey. “The Tribunal had sufficient legal motives, and motives of conscience, in order to do so. Because this trial calling for the closing down of the party was started following a political campaign carried out for months. As you know, those in power, their little associate the MHP and all their other allies targeted the HDP for months with declarations and threats.”

“This political campaign of threats and blackmail was already in the background of the first indictment prepared by the prosecutor. Moreover, the various units in power, starting with the MHP are not content with only threatening the HDP but also the general prosecutor in person. Anyone, even with minimal legal knowledge, realizes that this indictement, re-cooked in the back rooms, has no judicial value whatsoever.”

A political operation against the HDP

Everyone can see directly that this is a political operation. All together we also saw how the first indictement was empty of all substance, worthy of the trash can. In refusing this first indictment, the constitutional tribunal had done what was only fair. This latest decision is untenable in Law, when nothing has changed, the political campaign, the threats and blackmail operations continue and, what’s more, a murderous attack was committed on our organization in Izmir…

Power in person is the prosecutor at this this trial

If power is the prosecutor, the people stand as defendor

This trial will also have defendors, lawyers will fulfill the duty of defence. With our lawyers, we will prepare the most solid of defences, but everyone must clearly understand that, just as power is the prosecutor in this trial, the people stand as it’s attorney. We have also said that we will defend the HDP to the end and keep it alive. Our determination is ongoing, and growing. The people are the  true attorney in this trial, and mostly the Kurdish people.

We will spoil this case

The future of democracy

Whatever decision will be taken in this trial will not only affect the HDP. Above all, it will be a verdict on the constitutional tribunal itself. If it chooses the close down the HDP, the tribunal will be closing itself down as well, condemning itself in the people’s conscience, in international public opinion that calls for democracy. But that is not all. If the tribunal opts for the shut-down, it will show that it bends before blackmail, threats and plans for chaos. To put it otherwise, in its decision, the constitutional tribunal will determine the future of democracy and social peace in Turkey. The heaviest duty and responsibility thus rests on us, representatives of the Kurdish people, of all the people involved in a common struggle, on the forces of democracy in Turkey, and on international democratic public opinion.

Defending the HDP to the end

We are determined to defend the HDP to the end. No one must doubt it, we will keep the HDP alive for it is an organization and a cradle for a strong notion that serves as a light for Turkey’s future. The HDP is a solid and rooted structure, committed to democratic living together, not only in Turkey but also in the Middle-East. Those who think they can neutralize this through a court decision, cast a shadow through a trial on the determination to travel this road, are in serious error. Should they exist, those who intend to use this trial as a means of intimidation and blackmail must understand they will find the opposite before them.

A promise to our comrade Deniz

The HDP will find this strength in the strength it draws from the people  in order to determine the roads to political balances and the future of Turkey. Should all those roads be closed, the HDP will open up others with the people. We have no doubt of this. We make this promise to all our comrades who have paid the ultimate price, beginning with our comrade Deniz Poyraz.  We shall make the HDP live, we will make it grow and we shall overcome.”

How is such a process carried out?

When the court of appeals prosecutes a political party and requests its closing down, the constitutional tribunal applies the procedure used in a “penal case”.  The method employed is determined in the report on preliminary procedures. Thus, the indictment will be sent to the HDP for its preliminary defence. The indictment will be notified following the signing of the report on the preliminary procedure. Once this procedures begins, the indicted party must submit its preliminary defence within the delays specified by the superior jurisdiction. But it may also ask for a prolongation to this delay. The court decides to grant this request or not.

Following the HDP’s presentation of the preliminary defence, the prosecutor of the court of appeals, Bekir Sahin, is invited to express his opinion on the accusations. This opinion will also be sent to the HDP. Then, on a schedule fixed by the constitutional tribunal, the prosecutor and the HDP principals will make their respective declarations and verbal defences.

Following this, the rapporteur will gather information and documents, and prepare a report on the substance of the case. While this process is ongoing, the office of the court of appeals’s general prosecutor and the HDP have the right to submit evidence or supplementary elements for their defence. Following submittal of the report to the members of the constitutional tribunal, the president of the tribunal, Zühtü Arslan, will set a date for the meeting and, that date being established, the members with begin to examine the “substance” of the case.

As for the decision, a two-thirds majority is required for the closing  or the imposition of other sanctions on the Party, which means 10 out of the 15 members of the constitutional tribunal  in accordance with article 69 of the Constitution. Such sanctions could include a partial or total denial of public subsidies.

The Supreme Court’s decision will be submitted to the court of appeals that filed the case and to the HDP and will be published in the official bulletin. Persons subjected to a 5 year political prohibition will be forbidden from founding or participating  as cadres or leaders in any other political party, during this period.