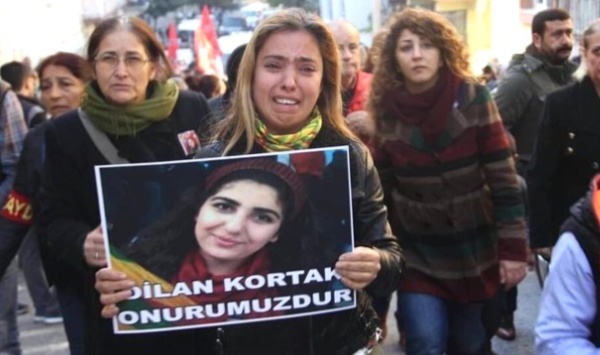 Once again, Deniz Poyraz’ life shows us that geography is destiny. Deniz was a young Kurdish woman who held freedom as an ideal and resisted in hope, despite the oppression and the violence experienced both as a family and as a people.

We come to know her after she has been basely ripped away from life. Her family, her comrades, the other galley slaves of the HDP Party knew Deniz much better 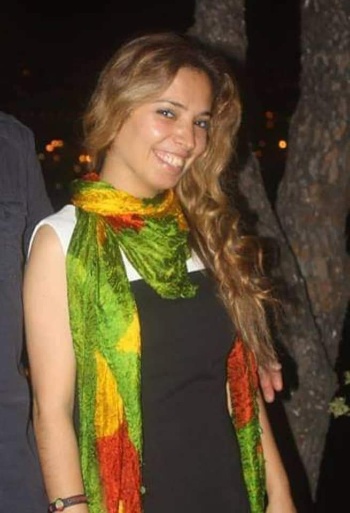 Giving Deniz’ life story isn’t very difficult, simply by going through the photos she left behind. In fact, one in particular, summarizes her entire story.

In her hands, she holds the photo of Dilan Kortak whose life was stolen by State bullets, at the same age as was Deniz… She is at the front row of a procession, in front of the flags of revolutionary organizations, with the kesk sor u zer 1green, red and yellowscarf around her neck, tears streaming down her face, she marches holding the photo of Dilan who is stubbornly smiling to life, just as she is.

Headline photo: Deniz Poyraz, at Dilan Kortak’s funeral. Behind her on the left, Hase Bingöl Tekin, Co-president of YAK-DER 2 Aid and solidarity association for those who have lost close ones – the association was forbidden and closed down by decree in 2016 and on her right Dilek Aykan, Izmir HDP CO-president at the time. December 2015.

Dilan Kortak lost her life  to police bullets on December 7 2015 during a raid on her family home in the Sancaktepe neighborhood of Istanbul. We Kurds, those millions who are convinced that peoples can live together in peace and dignity and who fight for this, we had experienced a great happiness with the electoral victory on June 7 2015. Do you remember?

In the Turkish Republic, the State records every happiness of the Dilans, the Agis, the Sores, the Zilans and all the Deniz’ and then, robs them of their life, asking them “how can you still be happy and filled with hope?” And even if we know this full well, we wished to forget, and continue to wish it.

Marching there with tears for Dilan Kortak, Deniz had no way of knowing that the same fate awaited her…

The Kortak family, just like the Poyraz family in the 90s left the village of Berti (Kocakuyu) of Ömerli, in the district of Mardin and went into exile in Izmir. When Dilan Kortak turned 18 she took her father aside and said: “Father, I am now 18 years old. Don’t call me ‘my child’ anymore, call me ‘heval’ 3friend in Kurdishfrom now on”.

Every Kurd living within the borders of the Republic of Turkey who wishes, out of a sense of dignity, to be called “heval”, who does not submit to the system and chooses to struggle for the people’s freedom knows that a day will come when torture, police stations, prisons, State bullets will find him or her, but goes on living without turning this into an obsession.

He/she lives with the dream of bringing peace to this country, along with all the other dignified and resistant persons on the same lands. “If not “today”, then “tomorrow”, and if he/she was deprived of a childhood, his/her children will have one. This is precisely the ideal that makes them so proud, so resistant and with such a fighting spirit.

Fehime Poyraz, Deniz mother, who is a part of this same struggle says: “When I was taken into custody 25 years ago, the State asked me ‘why did you produce so many children? Then, they imprisoned three of my children. They also took my Deniz from me.”

A brief survey of what Deniz lived through, of what her family has endured, and all the policies of the Turkish State against the Kurds  appear. And as for Dilan, we know very well who were Deniz’ assassins.  This contemporary Dehak 4in the legend at the origin of Newroz,  Kawa the blacksmith stood up against Dehak, the tyrannical king who has built himself a throne out of the blood of the Kurdish people, do you see him? The “National” leader,  “native son of Rize”, so tall and so short  on courage.

Do you remember? This “national” and “native son” leader howled in 2006, his face red with resentment and anger, with traces of hatred on his forehead: “No matter if they are women or children, what must be done will be done!” and the more he howled, the more Kurdish women and Kurdish children died. 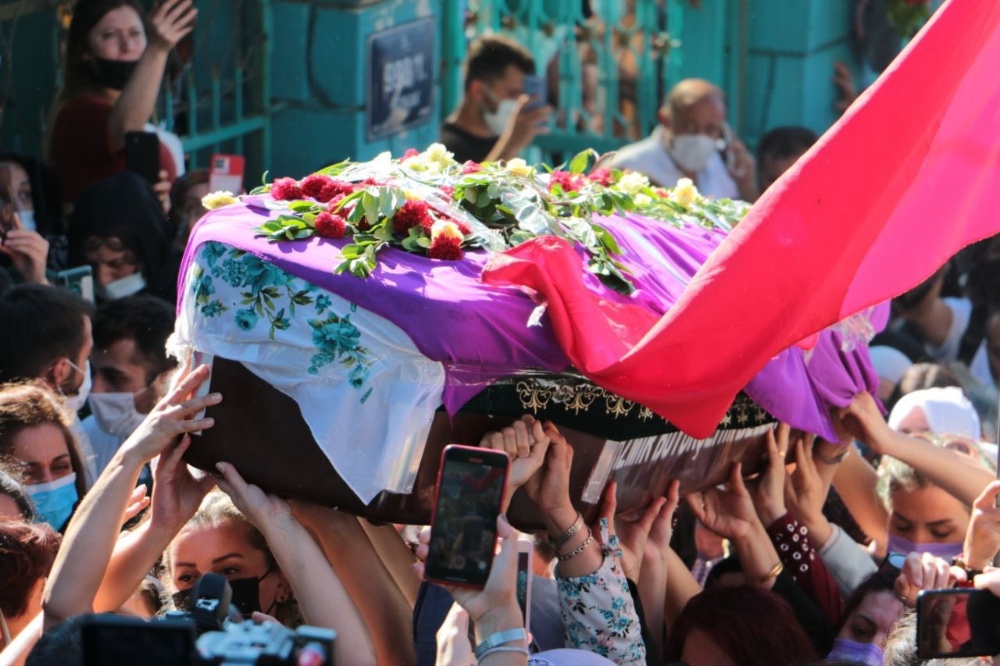 Those who pull triggers are set off by him and his associate through great displays showing all the macho attributes of a state in the most ugly and basic condition of putrefaction, with the Coran on their head, Turkish flags in their hand, their hearts filled with anger and hatred, and every day, they go on taking away our lives.

Remember the trigger displayed by the policemen who took selfies celebrating Hrant‘s assassination? In Izmir, another trigger who shared the same “national feelings” deprived a young Kurdish woman of her life. Her brother says to the policemen holding him, “let me be, I have cooled my heart.”

Those who raise those who pull triggers do not contribute anything to life, they are nothing but parasites who others push into the streets, the two State Reis, Tayyip Erdoğan and Devlet Bahçeli.

We have a debt toward them. We have a debt of peace, for all the children running in the streets of this country, we have the debt of a life, to Deniz Poyraz!