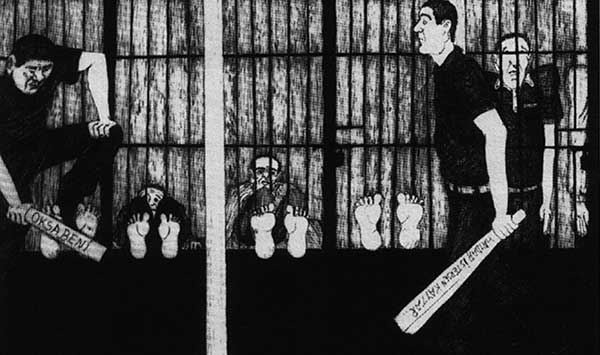 In Turkey, the military coup of September 12 1980 ran over the country like a steamroller. This nightmarish period left indelible traces. One of them points to Military Prison N° 5 in Diyarbakır, commonly known as the “Amed Gaol”. (Amed being the Kurdish name of Diyarbakır.)

This captain was killed years later by someone who recognized him aboard a bus, despite the plastic surgery he had relied on in order to become anonymous. Before his act, his killer said “Kemal the Laz from Diyarbakır prison salutes you”. As for Dr Orhan Özcanlı, “Diyarbakır’s Mengele”, he became a businessman, headed the newspaper “Öncü” and founded a chain of Sevgi hospitals (Sevgi means “Love” in Turkish!) and the foundation managing this chain is still in activity…

Zülfikar Tak is undoubtedly the one who best conveys the sinister reality of the Diyarbakır prison in the 80s, and he does so through his drawings. His works express the repression and the violence in which Zülfikar, like all the other political prisoners, were immersed during the post-putsch years of that period.

On July 27 1980, when Zülfikar Tak was thrown into the Diyarbakır prison, he was a young man of 17. Despite his youth, he was accused “of founding a separatist terrorist organization, killing military personnel, participating in protests.” If this reminds you of current events, do not hesitate, you are right.

There is probably no need to remind anyone that these constantly repeated accusations are still in use today, this time by the current power incumbents, adapted to current tastes and used against any opposing thinking brain, be it on the shoulders of intellectuals, authors, journalists, artists, academics, lawyers or politicians, male or female…

These drawings are a silent but evocative expression beyond words, of a fact never sufficiently repeated: No, Turkey was not ” a beautiful democracy” ruined by Erdoğan, as some stubbornly insist on proclaiming.

Zülfikar “resided” in the Diyarbakır gaol for 3 years. His incarceration lasted a total of 19 years, 8 years of which were spent in isolation. He never forgot what he lived through and to what he testified in these jails. In 2003, he published a collection of “cartoons” that are not the least bit funny, titled “Torture methods in the Diyarbakir prison”. However, through this book of non-humor, blacker than black, he expressed what was in his heart: “I would have loved to draw beautiful things. This was a work that triggered and stirred emotions, but, I hope this kind of work will no longer to be published, and that all that was experienced will be forgotten.”

In 1981 prisoners in the Amed gaol held a “fast to the death” (a hunger strike with no ingestion of reinforcements) denouncing the tortures and the prison conditions. The strike lasted 43 days and during this resistance, prisoner Ali Erak was killed under torture.

Three years later, during the resistance in January 1984, Necmettin Büyükkaya, Yılmaz Demir, Remzi Aytürk were killed and Orhan Keskin and Cemal Arat died of the sequels of their hunger strike.

Of course, all these acts of resistance were severely put down…

Yılmaz Demir killed himself in a final act of resistance and as a protest against the torture. He left a message explaining his act: “I am sacrificing myself so that the torture will cease in the jails, and so humane conditions of incarceration will be implemented”, he said and his message ended with these words: “One who does not fight for freedom cannot be called a freedom fighter.” The following drawing repeats this final sentence of his. 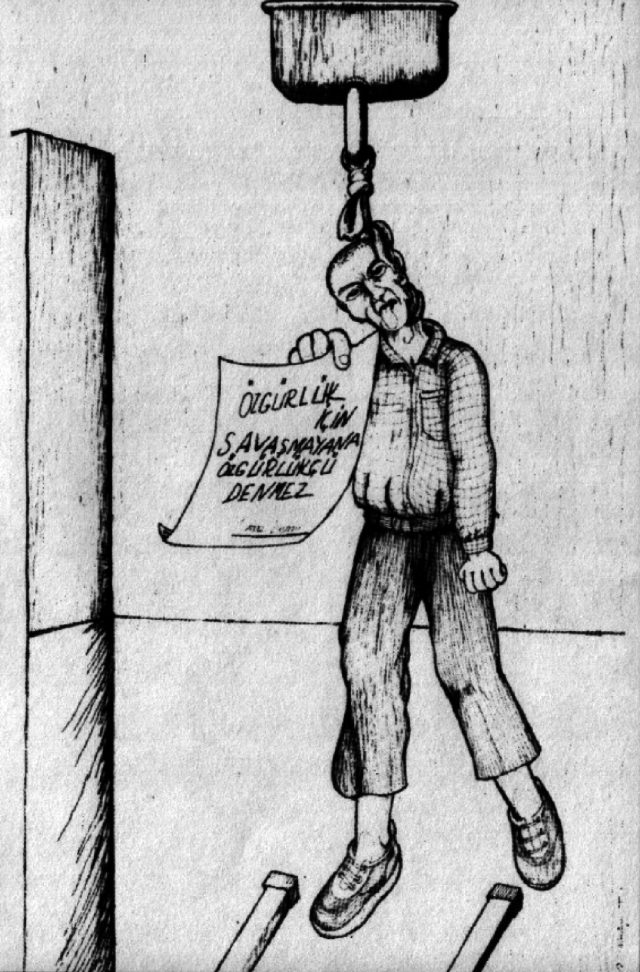 This is the first torture inflicted on prisoners arriving in Diyarbakır prison. It’s aim is to break the will of the new arrivals.

Like children playing with wooden blocks, the guards attempt to demolish a tower made up of prisoners, by hitting them with truncheons and pieces of wood. There comes a point when the prisoners can no longer stand the blows and all the men collapse from a height of several meters, in a heap on the cement floor.

An order is given so that all the prisoner lie down at the same time under the wooden beds: “Under the bed!”. The prisoners rush under the beds. The guards beat those parts of the body or limbs that are not completely under the beds, with sticks and wooden planks on which are written such creative slogans as “my ram”, “good appetite, little one”, “caress me” or again “black calamity.”

The prisoners are bound with chains with one foot on the bars of the stairs, the other on the door. The “stretched” prisoner is also beaten with planks bearing these slogans.

The prisoners are removed from their beds in the middle of the night and brought, one by one, in front of a table set up near the door. After the reading of his “crimes” as they appear in the prosecutor’s indictment from the main file of the PKK trial, prepared by the military tribunal of Diyarbakır, the prisoner is placed on a stack of empty fruit crates, a rope attached to the stairs is strung around his neck. After the guard kicks the crates away, the prisoner remains suspended for a while. He is “saved” by a signal from the “Little Lieutenant” supervising the procedure through the bars of the iron door.

The guards line up the prisoners in the promenade for “military education”. The line is a “caravan”. The guards divide it into four parts: camels, humans, donkeys and dogs. “Education” takes place according to these categories, often under beatings.

The Kurd with a tail

This consists of acts of rape done with oiled truncheons in the prisoner’s anus. The external part of the truncheon represents the name given to this method. The person shown at the bottom right hand side of the drawing is Dr Esat Oktay Yildiran, who has gone down in history as the author of these acts of savagery.

Shit or the lamb

This is one of the most vicious forms of torture. The guards give each prisoner a plate and line them up before the septic tank. Each one must help himself from the human excrements and eat them. The prisoners who refuse to obey are beaten with sticks and planks bearing slogans. Garbage is also used in this game… (Çöp: garbage can)

This takes place in the main corridor servicing the cells and the quarters, which is several meters wide. A concentrated mixture made with liters of detergent and water, trasnformed into foam is spread on the floor. Four prisoners are forced to lie down in this foam. Four other prisoners drag their comrades all along the corridor, thus doing “housework”.

The prisoners are out in the courtyard. They underwear is taken away. The guards order them to bend over and stick lit cigarettes in their anus. The prisoners are forced to “take their walk” in this position until the cigarette is finished. 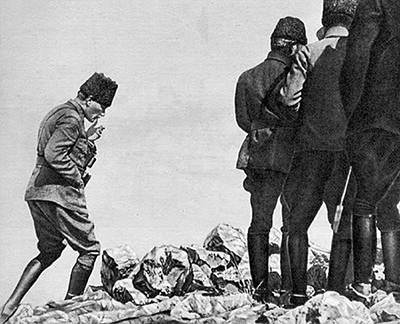 The prisoners are thrown and piled up one on the other to render a representation of Atatürk ascending Kocatepe.

This “reconstruction” is related to a photo done on August 26 1922 of Mustafa Kemal climbing the hill.
Nationalist creativity does not omit this popular imagery of the period “during the war of independence.”

The guard chooses the tallest and strongest prisoner among those in the courtyard and designates him as “the scale. He approaches the naked prisoners lying on the ground, one by one. He must grab them by the penis and lift them. He must also declare as with a military insruction: “So-and-so weighing such-and-such is at your orders, my commander!”

You must admit these methods are most inventive. There are many others… On some of the images below, you see the inscriptions on the walls. Here are their translation:

“Bir Türk dünyaya bedeldir” – A single Turk is worth the whole world.
“Adalet mülkün temelidir” (in the prison and in the hearing rooms in court): Justice is the foundation of property.
“Önce Vatan” – The country before all else.
“Ne mutlu türküm diyene” (partly visible) – Happy is the one who considers himself Turkish.

Zülfikar’s work is undeniably a link in resistance art, with that of Zehra Doğan who, having testified of the State’s exactions in the Kurdish region, in Eastern Turkey in 2015 continues today to archive the current conditions in the impossible conditions of the gaeol in Amed.