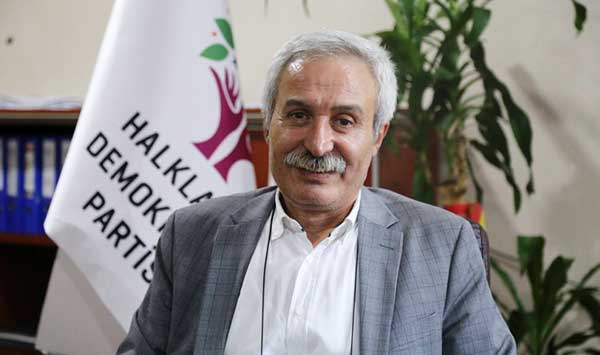 The verdict fell on March 9 2020: Diyarbakır’s Co-Mayor Selçuk Mızraklı was sentenced to 9 years and 4 months in jail for “belonging to a terrorist organization”.

Selçuk Mızraklı is a medical doctor and a politician. Born in 1963 in Siverek, Urfa in Southeastern Turkey, he has held various positions at the Diyarbakır Medical Chamber, including that of President. He is also the founding President and a member of the board of administration of the Mesopotamia Foundation. He was a deputy of the Peoples’ Democratic Party (HDP) from June 2018 to March 2019. As the HDP’s candidate during the local elections on March 31 2019, he was elected Co-Mayor of the Diyarbakır Metropolis with 63% of the votes.

Selçuk Mızraklı was removed from office by the Ministry of the Interior on August 19 2019, because of an inquest “linked to terrorism” that led to the trial against him. He was then placed in custody on October 21. He is currently detained in the prison of Bünyan, in the provice of Kayseri, thus deported 563 km away from his hometown.

Following his removal from office, he declared to Bianet:

“Democratic will was summarily executed during a midnight operation. The last remaining crumbs of democracy in Turkey were destroyed with this decision. This decision is an indication that the upcoming period will be more painful yet. There are no individual victims. Democracy in Turkey is the victim, along with all of its electorate.

Results of the March 31 elections were totally disregarded. As for the region, the will of millions of people was ignored. The Constitution was destroyed. The situation must not be seen in terms of three towns only. We must look at it globally. Currently, all the peoples in Turkey are subjected to a testing of democracy and morality.

We say that the one who remains silent in the face of injustice is a mute devil. No one should keep quiet when confronted with this injustice. We are right and we must amplify this justified cry.

There are many policemen in our municipal building at the moment. I think they are proceeding to a raid. I don’t know what they are looking for. But I know they will find nothing. If they want to find corruption, they should have done so in the days of the State-appointed administrator.”

In fact, Selçuk Mızraklı was only rexpressing, once again, the same observations as those of the other Co-Mayors removed from office and underlined, declared, hollered over and over again…

As a reminder, last January 7th, in an article about the deportation of prisoners, we announced that thus far, 32 Co-Mayors had been removed from office and replaced by State-appointed administrators. And in order to illustrate these outlandish deportations, we provided the example of 24 Co-Mayors of Kurdish towns. Selçuk Mızraklı is one of those prisoners affected by the deportations known as “forced transfers”, a method of isolating without the need for an isolation cell, a double sentence, a form of torture…

On March 9, Selçuk Mızraklı could not attend the final hearing and he was represented by his lawyers.

His lawyers underlined the similarity in a number of the cases brought against the Co-Mayors. They declared that the decision was not founded in law since all the allegations contained as evidence in the file were obtained outside legal means. Indeed, the President of the Diyarbakır Bar specified for his part that “The verdict rendered is absolutely not a court verdict. We cannot imagine that it could constitute a judiciary decision. We cannot speak of legally obtained evidence. As a matter of fact, on a number of occasions we have asserted before the court that the evidence was not obtained legally. The evidence consists of elements produced by the police, attempts at justifying the extorsion of the City Hall of the Metropolis of Diyarbakır.”

Selçuk Mızraklı’s lawyers will appeal to the Court of Cassation, then to the European Tribunal for Human Rights.

Meanwhile, in Turkey, in Europe, all over the world, everyone knows perfectly well that these removals from office, these revocations, prosecutions, convictions, be they of political men and women or of intellectuals have nothing to do with any “crime” whatsoever, and that the charges are arbitrary and absurd.

In fact, in order to find real evidence, the policemen and prosecutors go to so much trouble that, in the end, in order to create evidence themselves, they become extremely inventive…

And indeed, the torturer can be extremely creative.