Zehra Doğan at the Ravenna Festival 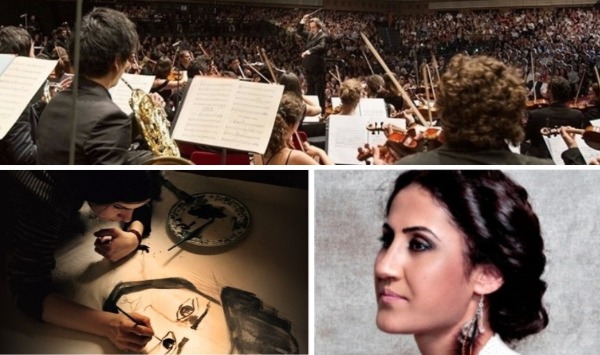 This year, the Ravenna Festival in Italy will dedicate large segments of its programming to Syria and to the fight for freedom led by Kurdish women. Under these circumstances, what could be more logical than to have Zehra Doğan be an active participant along with singer Aynur Doğan. The Italian media talk about it.

From prison, Zehra Doğan wrote: “Not being able to draw, not having access to my supplies, for me, this is another form of torture”.

The 31 year old Kurdish artist and journalist with Turkish citizenship will be in the Corelli Hall of the Dante Theater on July 2 at 10 AM for the presentation of the Festival book “Ravenna Festival”. First imprisoned in 2016, then again until 2019, precisely because of a drawing which she published on social media and was considered to reveal too much. It testifies to the destruction of the town of Nusaybin following a military siege during which the Turkish authorities attempted to avoid all press coverage.

Zehra Doğan benefitted from a large international mobilization, from Banksy among others who dedicated a huge New York outdoor mural to her. The Italian public met her at the end of 2019 during the Che tempo show under the direction of Fabio Fazio and today, here in Ravenna, you may meet with her in person, listen to her words and admire her intense and dramatic works some of which are published in the Festival book in the large section dedicated to Syria, before seeing one of her artistic performances on July 3rd, to the music of singer Aynur Doğan, also a Kurd.

The artist and journalist with the indomitable spirit will be an active participant in one of the artistic performances during the concerts titled Roads of Friendship, planned for July 3rd in Ravenna and July 5th in Paestum.

Dedicated to Syria and specifically to two of the victims of ISIS and of the military – militant Hevrin Khalaf and archeologist Kaled al-Asaad – the performance of Beethoven’s Symphony N° 3 “Eroica” under the direction of Riccardo Muti with the Giovanile Luigi Cherubini orchestra and the musicians from the Syrian Expat philharmonic orchestra, the event underlines the Ravenna Festival’s strong humanitarian implication. An implication which, since the first edition of the Friendship Roads – now celebrating its thirty-first edition – has concentrated on bringing sublime music to the peoples of regions touched by conflicts and in need of support from all sources. Because music is immaterial but nurtures brotherhood among humans and solidarity maintained in the face of suffering.

Zehra Doğan, Kurdish artist and journalist of Turkish nationality, was born in 1989 in Diyarbakır on the shores of the Tigris in southeastern Turkey, where she received an art and design diploma from the University of Dicle. She is one of the founding members of the JINHA news agency, the first such agency entirely composed of women, which was closed down by government decree following the special laws from the Turkish government in 2016. Thanks to her field work as a journalist, she received the “Metin Göktepe” Prize in 2015, named after the journalist who died following torture by the police in 1996 – the prize is awarded to journalists who “defend the integrity of the profession by resisting against pressures and obstacles.” In Zehra’s case, she was awarded the prize for turning the spotlight to the story of Yazidi women, a religious minority in northern Irak considered as heretics by ISIS and who were subjected to physical elimination, slavery and the sale of women and children on an international market for human bodies by the self-proclaimed Califate.

On July 21 2016, she was arrested and imprisoned for over 4 months prior to her trial, because of a drawing and a few articles written during the conflict in Nusaybin. Journalists had been barred during the military siege of this Turkish town, holding a majority of Kurds (a small Assyrian minority also lived there until 2016 of whom only one family remains). Then, in March 2017 and based on satellite imagery, the UN produced a report according to which, some 355 000 to 500 000 inhabitants were forced to flee the region and 70% of the buildings were razed. The number of dead and wounded is unknown. At that time, Zehra Doğan decided to cover events on location in order to testify, and signed her own sentence by so doing. Liberated in December 2016, she was tried on February 23 2017 and sentenced to 2 years and 9 months in prison.

From June 12 2017 onward, she was detained at the women’s prison in Amed up until her forced transfer to the maximum security prison in Tarsus. She was liberated on February 24 2019 and has resided in London since March 2019 as a guest of the British PEN.

During her incarceration, the Chinese artist Ai Weiwei, the International PEN Club and Amnesty International supported an international campaign for her liberation as a prisoner unjustly imprisoned for her opinions. The artist Banksy dedicated a huge mural to her on the Bowery Wall in New York. In November 2017, the Swiss association Frei Denken awarded her the Freethinker Prize, jointly with the Persian journalist Masih Alinejad and in May 2018, the Deutscher Journalisten Verbrand (German Association of Journalists) awarded her the Spring of Press Freedom Prize: prizes which she could not receive in person, in both cases, since she was still in prison. But in April 2019, she could finally receive the Index on Freedom of expression prize in London for her artistic work. And in May of that same year, the Tate Modern held an exhibition of her installations: on this occasion, the artist declared that while recognizing the importance of this exhibition of her works in a British museum, her deepest wish was to be able to do so in her country, which is currently an impossibility. On October 11 2019, she received the Prize of Courage of the May Chidiac Foundation in Beyrouth, signaling exceptional courage in journalism. The following month, her book “Nous aurons aussi de beaux jours” (We Shall Also Know Finer Days) was published by Editions de Femmes in France, which served as an inspiration for the title of the exhibition of her works held recently in Brescia.