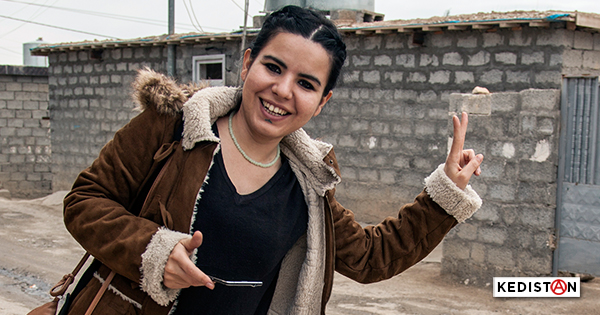 On her sentencing document, there appeared a possible early liberation date of February 24 2019. And so, Zehra Doğan was allowed to leave jail today.

Tonight, she will not look at the stars by gazing at a plastic one under a bunk bed. “I will spend two years with this plastic star glued on my bunk bed. I will live with this artificial star until February 24th 2019, as with a real sky. Convincing myself of that is one thing, but the fact of being condemned to it, supposedly as a punishment, strikes me as absurd”, she wrote on October 7 2017.

But what was it she said about “freedom” in Turkey?

“The other day I went out to the hospital. I was looking through the tiny window in the blue Ring (prisoner transport vehicle). I looked at the people. They were rushing around. Life goes on. But curiously, I felt no nostalgia. I even felt pity and was saddened over them even more. I said to myself ‘these people are not aware that they are prisoners. The only difference was the fact I was in the blue Ring with handcuffs’. I did not wish to take the place of a single person who was walking down the street at that moment. They were also handcuffed but they did not feel it. It made me feel funny. Moving slowly under the grey sky through the suffocating and frozen streets, in the mass of people with frozen expressions and empty skulls, at that moment, I wished to get back to jail as soon as possible…

I’m angry at myself for that wish, but what can you do. I think I am not well. I think that, in this situation, none of us is well.”

Leyla Güven said something of the same thing when she was liberated. “What is this Turkey, this free outside world where I experience things in a strange way, and less collective solidarity?”

Turkish jails thus have an inside and an outside.

Is this a reason to hide our joy at seeing Zehra free at last from the stone walls?

Zehra has finally come out of jail! This is news worth celebrating for all those who have supported her since 2017 and who have hoped so hard for her official liberation.

Zehra Doğan is thus free in that Turkey under surveillance, this is the good news we were all awaiting.

All of us here at Kedistan would have loved to embrace her this evening.

But the kedi are “personnae non grata” in the country of the Reis. We will settle for these words she sent us and with the emotion we experienced when the news was confirmed.

Since July 2017, so many people have labored across the world, so many individuals, artists, writers, journalists, and so many anonymous ones so that “never a name would be allowed to sink into the unknown”, to use the words that are inscribed somewhere in the motto of the P.E.N. International Club, the association supporting emprisoned writers and artists under under which her protection from the regime occurred through the net of solicarity. Kedistan performed a role in this, as you know. Touching so much as a hair on Zehra’s head would have started a war at Kedistan.

Thanks again to all those who consolidated this support over the months, to the great media personalities such as Banksy and Ai Weiwei, to the jurors who awared prizes to Zehra for her courage and her freedom of expression, to the major international associations devoted to freedom of expression and to humanists who accompanied us and who used the logistical support we had modestly put in place in order to feed their own initiatives. This liberation belongs to them, and is tangible proof that no act of solidarity is useles or done in vain.

Sharing our joy with you is not hard. All of us look forward to embracing Zehra.

And we take the opportunity to announce another piece of news: a vast number of her “letters from prison” will be published in French by “Editions des Femmes” this year. What better editorial showcase than this one!

You can already begin watching for this book’s publication and planning initiatives around it – who knows, with Zehra in person? As for a look at her visual works, don’t forget many of her originals will be exhibited at the Rennes Opera House in March…

In upcoming days – experience is our teacher in this – vigilance will be in order, so as not to allow the regime to find a new motive to imprison Zehra. Her freedom, her right to circulate, depend on the maintenance of your support.

All of your support will take on its full meaning for Zehra when she will finally be in a position to live her life in a future she will have freely chosen. At age 29, as a Kurdish woman and an activist who does not need to demonstrate her strength and the legitimacy of her struggle, a future opens up before her, one that has not finished filling us with enthusiasm.

To PEN International, and all the PEN of the 5 continents, especially the English PEN and French PEN Club, the Editions des Femmes for their precious support, to Sadık Çelik for meeting us with Zehra ; to Titi Robin, Erik Marchand, Denis Péan, Coline Linder, Christophe Bell’oeil, Eléonore Fourniau, Nolwenn Korbell, Güler Hacer Toruk, Sylvain Barou, Neşet Kutaş, Groupe Yıldız, Ruşan Filiztek , Mireille Mast, Yohann Villanua, Haydar İşcen, for their musical support, to Aslı Erdoğan and Aynur for their warm messages, to Banksy, Ai Weiwei, Gianluca Costantini, Elettra Stamboulis for their artistic and heartfelt support, to the entire Lucie Lom team, especially to the photographer Jef Rabillon who archives all of Zehra’s artistic work and to Philippe Leduc, our precious artistic advisor who marvellously sets the stage for Zehra’s exhibitions, to Monique de l’Eclat de verre for her talent and attention to the framing of the works, to Mathieu de Docuworld for all impressions, to Michel Bernard for the Rallumeurs d’étoiles for the magnificent star balloons dedicated to Zehra, to Refik Tekin, photographer journalist, long time friend, to Marie Laverre and her colleagues at the DBD, Les Arts Dessinés and Les Cahiers de la BD, to Jacques Tardi and Dominique Grange for their moving support, to Catherine and Bruno Ferrari for their omnipresence, to Catherine Barat for being the creative witch she is, to Niştiman Erdede for her commitment at heart, all the plastic artists who created for Zehra, including Véca to mention only one name, they are many… to the actors Daniel Mesguiche, Bernard Froutin, the friends of Le dire et l’écrire and all the voices that gave life to Zehra’s texts, to Louis Mathieu and all the friends of Cercle 49 who teleport immediately to where they need to go, to the troupe of the Arbre Compagnie, which takes Zehra even further, to Maite and Renée Lucie Bourges, whose translations have carried the words of Zehra sans frontières, to all the translators who helped us, to the café associatif Rallumeur d’étoiles in Martigues and Nathalie Jhn for the incessant support evenings. A big thank you to all those, persons or associations in Europe, including Festival de Douarnenez, Amitiés Kurdes de Bretagne, Amnesty Detmold, Asyl in Not, Kaxilda, Kurdish Art Fair who were accomplices and facilitators for the exhibitions, to our partner Roj Info, but also to CDKF, the Kurdish Women’s Movement and all the others who have relayed information and calls, to the journalists who have supported their colleague, particularly to Güler Yıldız and Geneviève Bridel of RTS, to all our friends and close circle who have always been there to cross joys and obstacles, they will recognize themselves…
and of course, a big thank you to all those who heard and understood Zehra and sent her letters and thoughts,
but also to Zehra, for bringing so many beautiful people together…