Call for the Immediate Release of Aysel Tuğluk 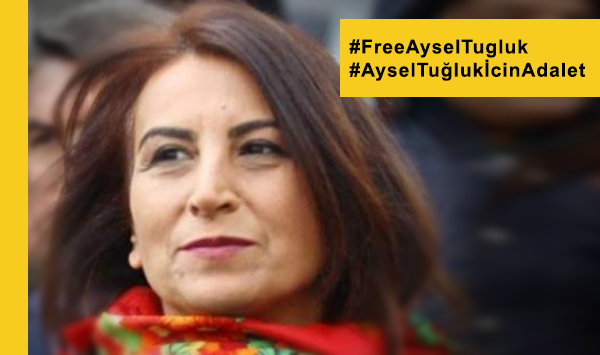 In early December, we had already described the urgent need for her release for medical reasons in an article titled “Aysel Tuğluk and Lost Memory”.

We also wrote that hers was not a unique case, and that it was typical of that of dozens of political prisoners whose health was precarious and required immediate releases. The same holds true for very old prisoners.

With the first 50 signatures collected in Germany, here is the text of a petition that has just been launched. Kedistan’s entire team joins in and invites all media with any interest whatsoever in Turkey and the people that make up the country, all defenders of fundamental human rights, to sign this appeal, currently addressed to the new German government since it is known to be heavily influential on European orientations as pertains to relations with Turkey and its political regime.

We hope this appeal will rapidly extend to the future French presidency of the European Council which will begin in January 2022.

* Update of 4.1.2022: This wish having been shared by many, the initiators of the petition have updated it in the terms below indicated in blue.

You will also find on social networks other coordinated appeals we must relay.

Appeal to the Council of Europe, the European Union, and new German Government:

Aysel Tuğluk, a human rights lawyer and a former MP of Peoples’ Democratic Party (HDP), has now been in detention in Turkey for five years.

Pervin Buldan, MP, announced that Tuğluk is seriously ill and has hardly spoken since the assaults of a nationalistic mob surrounding her mother’s funeral. The Faculty of Forensic Medicine at the University of Kocaeli has stated that Aysel Tuğluk is no longer fit to be imprisoned due to chronic and progressive Alzheimer’s dementia and should be released from prison immediately. This was rejected by the responsible İstanbul Forensic Medicine Institute affiliated to Ministry of Justice.

Turkish-German Forum of Culture calls on Turkish authorities to put an end to systematic repression of opposition figures and the immediate release of Aysel Tuğluk and other prisoners, who have fallen ill, as well as of all political prisoners in Turkey like Selahattin Demirtaş, Osman Kavala, Gültan Kışanak and thousands of others, who are in jail only because of their political and social activities.

At the same time, we appeal to the Council of Europe, the European Union and to the new Federal Government of Germany to make the humanitarian orientation of its Turkey policy clear on this special occasion, and to end to the appeasement policy of the previous coalitions towards President Erdoğan:

“Send a clear signal that your government will stand up for human rights and democracy also in Turkey! Demand the immediate release of Aysel Tuğluk and other prisoners, who have fallen ill, as well as thousands of political prisoners like Selahattin Demirtaş, Osman Kavala and Gültan Kışanak!”

Through the EU Council Presidency, which France currently has taken over, EU must also put these issues on the agenda and not prevaricate with Turkish authorities over human rights. No agreement, be it on economic issues or migration, can justify this.

For its part, the Council of Europe has already deliberated on several occasions concerning Turkey. However, decisions announced by the European Court of Human Rights (ECHR) are not implemented by Turkish authorities. The credibility of the Council is at stake in enforcing them. Defending the rights of all of these persons is an indispensable first step.

Please support our petition and join us in standing up for the immediate release of Aysel Tuğluk and the rights of political prisoners, also in Turkey!