Turkey • Those Left Behind by the State 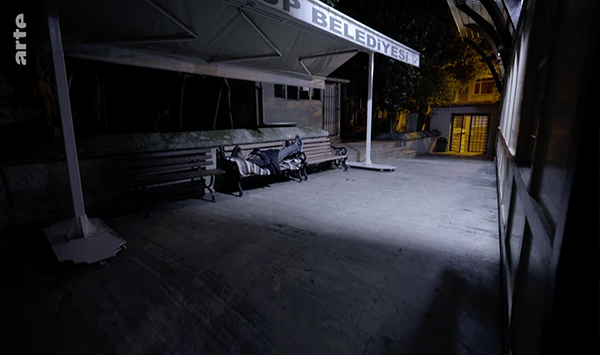 One could see as a simple matter of basic compassion a documentary on the homeless of the Bosphorus, on the misery developing in Turkey where the homeless fight over spaces with the stray cats in Istanbul. One could  then file the sequence under “ fine thoughts at Christmas.”

I wished to go beyond the sensation of compassion, even knowing that summarising in a few lines the reasons and causes for the misery in Turkey, as elsewhere, is an impossible task.

It is well-known that Turkish currency is experiencing a seesaw of ups and downs on financial markets, mainly on Turkish ones. The regime claims this is due to external attacks, speculations, the shadow of a George Soros or other occult powers “who wish ill on Turkey”. Erdogan himself takes center stage in re-establishing a parity between the Turkish lira and the dollar; as a corollary: a huge inflation affecting all basic goods.  All that counts in this exercise is hiding this misery no one must see. Whoever mentions it becomes a traitor to the Nation.

But the Turkish economy is ill. It is ill because of its huge dependency on imports, as a result of its massive entry into the capitalist turmoil, also known as globalisation.

As a telling example: hazelnuts, an agricultural production where Turkey largely dominates the world market. With the collapse of the Turkish lira,  production has fallen because of the increased cost of imported pesticides and fertilisers for a production totally centred on maximum profit and the wild competition that ensues on the wholesale market. With these shortages, Nutella, the signature product sold world-wide, will show price increases, while in Turkey an agricultural production on which many people  depend for their survival finds itself disorganised –  a total reversal of the aims pursued by this form of  intensive agriculture.

On large industrial sectors, Turkey’s economic choice of furnishing cheap labor to delocalised capitalists from Western countries has left it dependent on globalisation, and mostly, on capitalistic choices in expending the lowest possible output on salaries.  But – and this is one of the major causes for the crisis – not only do profits not re-enter distribution circuits in Turkey, but the income generated by globalisation is diverted through corruption. In certain sectors, from construction to weapons, concentrations and confiscations reach such levels in the hands of the regime’s oligarchy that the Capital escapes Turkey’s true economy altogether.

The regime’s “expansionist” policy – a theoretical construct based on a nostalgic interpretation of the  Ottoman era, does not bring in financial dividends either, and fluctuates depending on alliances and agreements on a background of compromises unfavourable to Turkey. Erdoğan’s relationships become hard to follow, with the Europeans, the Emirates, Russia and mainly the United States. Military claims on the borders constitute as many reversals, while causing their lot of daily victims. In this context, the dependability of Turkish currency is not guaranteed and is also subjected to speculations, of course.

So that, basically, the causes of the current poverty in Turkey are linked to the political system, to the huge social inequalities it generates, to the absence of any equitable social system, leading this poverty to become endemic. Far from being only the result of an exodus from poor countrysides to the cities, as was the case at the end of the previous century, this misery is born within the big metropolises themselves, subjected to the double law of savage capitalism and regime corruption. In this, Turkey is no different from a number of capitalist countries. But, in this reportage, the film makers draw our attention to specificities.

By choosing to follow two people whose only concern is attempting to help those in need, we are brought to the level of questions this poverty raises in a Turkey where the State is constantly saying that it is “all powerful, attentive to the good for its people”. A third character, homeless, summarises all these questions himself by saying “Had I known what it would become, I would not have done my military service or paid my taxes for this Country.”

Another question runs through the documentary: Islam. One of the protagonists is a practicing Muslim. He calls himself a “sociologist” and criss-crosses Istanbul’s poor neighbourhoods in order to help the most destitute, without distinction, including migrants. This, for him, is the basis of his belief system and of his culture The TRT, Turkey’s official chain, even drew his portrait as “the Muslim who comes to the aid of others”. And yet, in this documentary, he tells us about the official ideology with its inverted practice of a State taking hold of Islam only to ignore inequalities, thus increasing them. And there is no nationalistic subtext in his words, at a time when the power’s bigoted ultra-nationalist allies maintain a steady barrage of same. No turcity, nothing by the words and practice of a humanist.

The other protagonist is a woman. She has emerged from the street herself. Pointed out as a former prostitute, her strength has led her out of misery. Since then, she has pursued the struggle , in her own way, and is proud of this life of solidarity. In passing, the handful of students giving her a hand on occasion also mention their own precariousness in a State that pushes away a part of its youth unfavourable to the regime. But it is also through this woman that we discover a “good neighbourhood “ where she must go in search of a “sponsor”, quite against her will. Savor this moment, and remember how shared compassion is one of the easiest things to imitate when one has both the power of money and of belonging to a certain cast/social class.

The film is replete with details and its makers did not fall for the false posturing of opponents to the regime. No doubt they avoided some of Istanbul’s terraces where the official opposition plays at opposition, while awaiting the upcoming election.

I don’t want to reveal anything more about this documentary and wish you a good viewing.

* For English readers: the documentary is on Arte, the French-German platform and thus available in French and in German. Even if you do not understand either language, the images are worth the viewing to get a sense of the extreme contrasts one can find in Istanbul – as in other “great and famous” cities across the world.