The bitter hazelnuts from the Black Sea 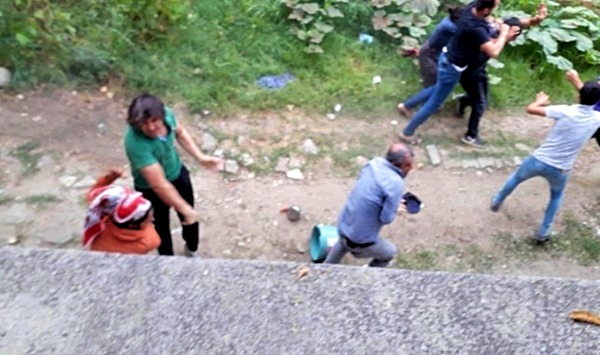 Seventy percent of the world production of hazelnuts comes from Turkey, and most of it near the Black Sea. Turkey insures supplies for firms such as Nestlé, but also for Ferrero, home of the famous Nutella spread.

The temporary interruptions in exchanges due to the pandemic thus hit Turkish exports in this area as in others. Production in 2020 is estimated at 650 000 tons.

In 2019, The New York Times detailed how the harvesting of hazelnuts was done through the exploitation of Syrian refugees, paid a few miserable euros daily for a tough and exhausting job.

We know that multinational firms, in their constant search for the greatest profit margin, take advantage of the slightest differential in social rights on a world-wide scale. Turkey offers a most favorable terrain for this. And even if Ferrero pretended to react following that article, the situation stayed the same. But it is interesting to see that in the photographs illustrating said article, centered on the exploitation of “Syrian refugees”, exploitable at will, there also appear some Kurds.

Nothing surprising in this, since traditionally, the Kurdish sub-proletariat in Turkey has always been employed as cheap seasonal labor. The Syrian refugees for which, as a reminder, the European Union pays several billions so the Turkish government will “hold them back” are thus put in competition with Kurds searching for work. Both victims of exploitation and of racism, are in a face off before their exploiters who divide in order to pay less.

Before looking at the recent racist violence against the Kurds during this “2020 hazelnut season”, which did not make headlines, we would like to share Zehra Doğan‘s testimony on this seasonal labor. This testimony, which contradicts the fable that claims “things were better in the beautiful secular Turkey”, concerns the year 1995 and thereabouts.

One day, long after, the family went to work picking hazelnuts in the Black Sea region. There, I noticed on my own the discrimination to which I was subjected, and I hated living so far from my lands. When you are in a world linked to a past and a shared culture, you are not “other”. You are part of the majority. Even if you are different, you don’t feel humiliated because you are at home, and that’s all. The hardest is feeling truly humiliated. Physical violence hurts but it is not unforgettable. Mental violence hurts a lot more.

After a three-day trip aboard “black train 114” we finally reached the Black Sea region. They took us to the shore. Everyone had set up their tent here. There were only Kurds. The tents had been built with bits of plastic and under each one some twenty people of the same family took shelter. There was mud everywhere. It rained constantly. The children were dirty, with empty bellies, miserable. And as if this were not enough, they had put up a sign that read: “The Dogs’ Place”. Can you believe it? In the 90s. Around 1995. We, the Kurds, were the “dogs”. When I speak of a shore, don’t go thinking of a beach. On that spot, anyone who took the risk of putting a foot into the sea was drowned. Pitiless waves, swamps: it was a very dangerous zone for bathing. Most of the people didn’t know how to swim. But those who were seeing the sea for the first time in their life wanted to bathe in it. Thus were caskets often sent back home.

This was the waiting zone. That is, in labor terms, “the market of humans”. The owner who wished to harvest his hazelnuts came there, chose workers the way he would choose sheep and took off with them. After they left, another kind of suffering would begin. Those who were not chosen worked in the mud until night time to repair the ramshackle tents. They experienced disgust for us. They wouldn’t even eat a piece of the bread we had baked. They kept repeating “dirty Kurds”. The adults argued with them every day, saying: “Why don’t you come to our land some day, you will see what humanism means”, and thinking the children didn’t understand, they spewed every imaginable insult at them in Kurdish. They covered everything, their mentality, their ancestors. My sister Leyla was truly ferocious. She gave them hell in every way possible.

You know, I was a hawker in the streets of Amed. I sold water, desserts, parsley, toffee apples, fruit-flavored popsicles. I polished shoes. I also sold books. All of that made me happy because I earned a living. But working in the West in the fields, under the orders of racists, that was a real torture. Over there, you felt the unbearable pain of despair down to the marrow in your bones.

In passing, for those who may still be wondering what forged the Kurdish feminist combatant now fighting with pencils, words and paint brushes and who had already experienced custody at the age of fifteen, for those suspicious ones who say “but where does she come from?”, we strongly recommend the complete reading of the book before any further comment.

Recent violence not covered in headlines is there as an illustration of how this racism has advanced and grown, from the regime prior to Erdoğan’s to this day. The rags of nationalism carried by the AKP, its ultra allies and the majority opposition party draping Turcity on the Turkish Republic continue their racist treatment of populations of Kurdish origin. And do not think that child labor has decreased either.

When a non-Turk mentions the racist violence that occurred recently, it is in these terms: “In Ortaköy Sütmahalle, a village in the province of Sakarya in Northern Turkey, eight men were filmed on September 4 hitting a group of seasonal workers from the region of Mardin, some 1 200 kilometers from there, who had come to harvest hazelnuts” the AKP media respond with “a tussle between peasants”. Social media underlined the anti-Kurdish racism on the one hand and on the other, its negation and the will for a “Kurdish separatism”. Others, as is customary, headed for baseless and sensationalistic victim politics. A few intellectuals and politicians from the Black Sea area published an appeal denouncing “…the chauvinism, reaching the level of racism, not paying them the salaries they deserve, draping flags around their necks and forcing them to kiss them, forcing them to sing the Turkish national anthem, lynching them…”

Zehra’s testimony then allows a truer perspective on this “tussle between peasants” as described by the AKP. A political and historical perspective. Kurds in Turkey are not only a “marytred ethnic group” or a “homogeneous and undifferentiated people”. Kurdish populations are also criss-crossed by questions of class. Exploited in this instance through a State policy transforming them into a discriminated against proletariat, in town or in the countryside, but also treated in a racist manner in order to break up all solidarity among the exploited.

In the nationalistic retrenchment we observe everywhere, populations afflicted by State racism in a systemic manner are subjected to violence, discriminations, repression and experience themselves as colonized, third zone citizens. That racism is not ethnic, religious, but social. And when a legitimate political representation rises up to face it, it is hounded, fought against, massacred and imprisoned. The Peoples’ Democratic Party (HDP) knows the price it pays in permanent arrests, sackings of elected members, and constant strikes against its possibilities of expression.

This nationalistic logic, the Kurds have lived it and experienced it in their flesh for decades, as a legitimate people living on ancestral lands and wishing to do so with those history has forced to migrate there a century ago, on this mosaic-like Turkey born from the cutting up of the ex-Ottoman empire a century ago, preempted by an exclusionary ultra-nationalism, currently sublimated by Erdoğan. How many are there now in forced exile? How many are in prison? How many of them are subjected all the way into Europe by the racism of the regime’s henchmen?

When you open your jar of hazelnut spread, even the organic kind, tell yourself that the road it travelled may have started in the “Place of the Dogs”.