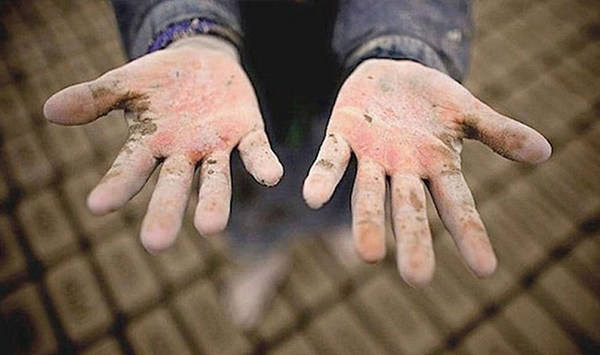 Leyla is 11 years old. She rises every morning at 6. Works 10 hours in the fields with two breaks of 15, 20 minutes. When she returns from the fields to the tent that shelters the family, she does the housework and the cooking. Like her more than 400 thousand peers, Leyla cannot live her childhood…

In Turkey, children work in the areas considered the hardest and where these children are exploited purposively: which is to say in the street and in small and medium-sized businesses in the heaviest, most dangerous sectors, and in agriculture. According to the figures available from Turkish Social Services (SGK) in 2018, of the 48 thousand children registered as workers, 7 094 of them had experienced accidents.

Only 65,7% of the working children are schooled, 70,6% are boys and 29,4% are girls. The children are spread out as follows: 30,8% in agriculture, 23,7 % in industry, 45,5% in services.1Information provided by the Directorate of the Department of International Relations of Bilgi University in Istanbul.

The children have gone on working during the pandemic

The Children’s Rights Committee of the IHD, the Human Rights Association, in a communique published on June 12th for the “world day against child labor” underlines the fact that the children working in agriculture have not stopped doing so despite the coronavirus pandemic and a curfew for those aged less than 18 years. “Curfew and sanitary precautions in the fight against the epidemic have not been applied as regards seasonal agricultural workers and the health officials in a bulletin published on April 4 2020 allowed the deliverance of travel permits, including for laborers aged less then 18 years.”

And yet, the Turkish government had imposed a curfew for those under 20 years of age in March, but had then exempted persons between 18 and 20 who had a job.

“Studies demonstrate that all the members of families, including the children, take part in the seasonal agricultural work, and the children are even preferred for certain jobs” also states the declaration. The association also takes another look at the most recent research from the Turkish Institute of Statistics (TurkStat) regarding child labor and states that the research was intended as a means of dissimulating the work of children in agriculture. The study was done between October and December 2019 and published in March, and put the number of children between the ages of 5-17 exercising economic activites in Turkey at 720 000. The IHD specifies: “This is a period during which seasonal work in agriculture is at its lowest level and when the school year starts: consequently, the data collected during this period does not reflect the true figures on children laboring in agriculture.” 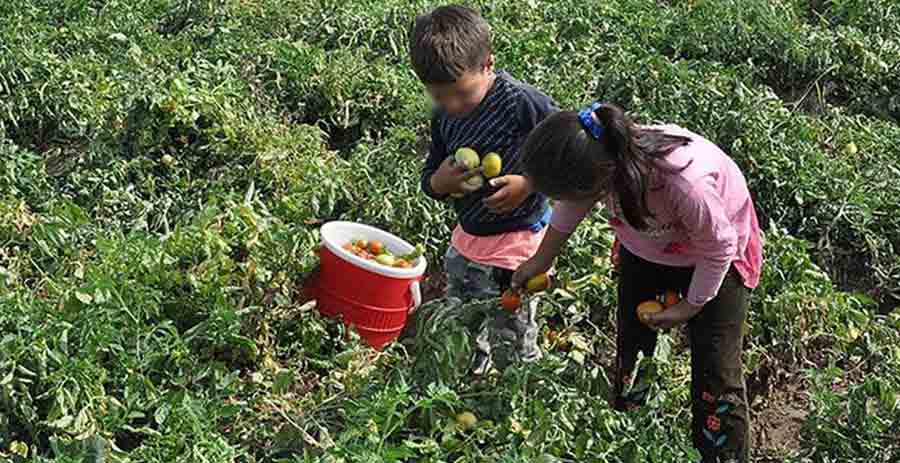 Moreover, “Hayata Destek” (Support for Life) an NGO founded in 2012, is active in attempting to put an end to the exploitation of children in different towns and regions, such as Adana, Düzce, Ordu, Sakarya, Şanlıurfa ve Zonguldak, Hatay, Diyarbakır ans Istanbul

The association has gathered testimonials from the children working as seasonal laborers in a visual document providing the following information:

The association notes that child laborers are estimated at 1 million in Turkey. It specifies that this figure has risen significantly, particularly over the past 5 years with the arrival of close to 3 million Syrian migrants, more than half of which are children who also join the ranks of the masses of exploited children.

Gözde Kazaz, communication officer for the association, attempts to sensitize the public in an interview done by Figen Atalay, published by Cumhuriyet, and allowing a few child laborers among the thousands of them to speak: Abdullah, Ayşe, Hasan, Leyla, Yusuf and Zeynep who work in Adana, Konya and Şanlıurfa.

Given their economic potential, different towns in Turkey attract great numbers of rural people seeking work. Their numbers are estimated at several hundreds of thousands and the children follow their family in the seasonal or permanent moves. 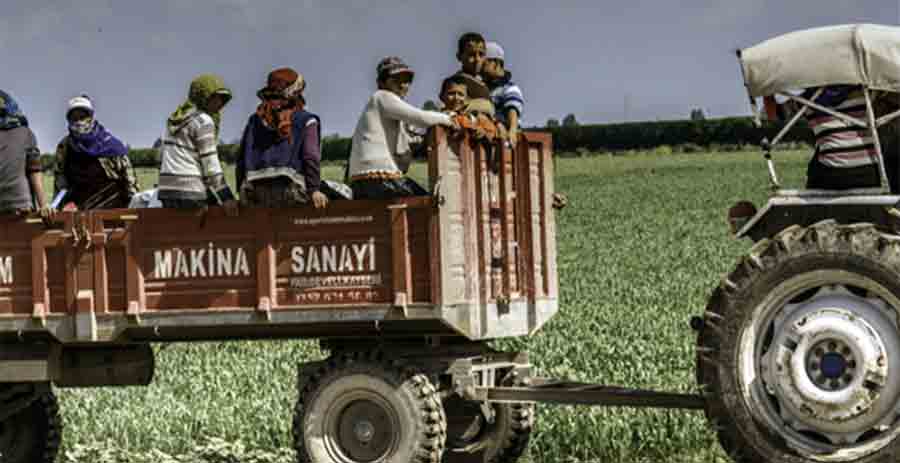 Listen to the voice of these child laborers who often use the word “house” for the tents that shelter them.

“There is a garbage dump here, I really don’t like this place”

Abdullah is 13 years old. He works in Tuzla in the district of Adana. Adana is a large city in Southern Turkey, a strategic crossroad dominating the fertile back country, the town is an industrial and commercial hub enriched by a vast cultivated zone – the plain of Çukurova producing cotton, citrus, flax, sesame and vegetable.

“I made friends here, members of my family. We play together with the children of my relatives. My favorite game is hide-and-seek. But since the space in the tents isn’t sufficient, we play in the street. And here, there is a garbage dump, I really don’t like this place. There are smells that come at us, flies, different kinds of bugs and dirty stuff”, he says.

Then Abdullah talks about school: “I used to go to school. I was in 8th grade [the equivalent of the 4th in France]. I like school and I miss my friends. When the school closed because of the coronavirus, I followed classes by phone. I want to keep on. After my studies, I would like to teach sports.”

“Come winter or summer, we are here to work”

Ayşe, 14, works in Çağırkanlı, Adana district. She talks about her daily life: “My family works. We leave in the morning and come back at night. My brothers and sisters stay at home. Right now, we are hired on a daily basis. We won’t leave here to work elsewhere. Come winter or summer, we are here to work. We wake up at 5:30, we leave at 6:15. The trip lasts half an hour. We leave some 15, 20 people together. I work in the field for 8 hours. We have two breaks. We go home à 5:30.”

Ayşe adds: “When I come in from the field, I take care of the domestic chores. I can’t play with my brothers and sisters, with my friends. With what would we play? There is nothing to play with.”

As for school…“I don’t go to school. The last time, I was in 6th grade” [the equivalent to 6th grade in France].

“Here, there is nothing but mud”

Hasan, 13, works in Mürseloğlu, still in Adana district. “I get up at 7. I do a bit of sport. I try to work to help my father but they don’t always take me, so I stay at home. I have no friends. There is no park. That’s why I stay at home. We don’t even have a space in which to play here. Here, there is nothing mud, earth. There is nothing else. We don’t feel like playing either. My brothers and sisters are small. They play together. They play with stones, with mud…
I used to go to school, but I can’t study anymore because we can’t afford it.”

“We will leave for the hazelnut harvest”

“I don’t know how long we will stay here. Afterwards, we will leave for the hazelnut harvest,” says Leyla, an 11 year old girl who works in Makas, Konya district. She talks of her days: “My days go by in a very boring way. We wake up at 6, have our breakfast and leave for the field at 7. The field is right in front of the tent, about a 10, 15 minute walk. We have two breaks in the day. We work until 7 at night.

My brothers and sisters never play, they are bored at home. So I am I, I feel like I’m going to explode from boredom. I can never play with friends. We never have the time…”

We are in Viranşehir, in Şanlıurfa. Yusuf is 13 years old. “When the work is finished here, we will go to Manisa. We will do the plum and cherry harvest”, he says. Here is his daily routine: “I get up, I wash my face, and I eat. Then the truck arrives and we go to work. We have two half-hour breask, at 9 in the morning and at mid-day at 1. We work until 5 and we go home

At night I study my lessons, I read books in my free time. I love stories translated from foreign languages. When we come back to the tent, most of the time, my aunt takes care of the house work. I cut some wood, I bring in the water.

I go to school. I really like the science classes.”

In Turkey, child labor in poor families is nothing new. It affects minorities and migrants both as severely. And even if there have been hypocritical laws condemning it in order to be up to “European standards” two decades ago, they were never applied in daily life and have done more to repress street vending due to poverty, than the harsh exploitation of children.