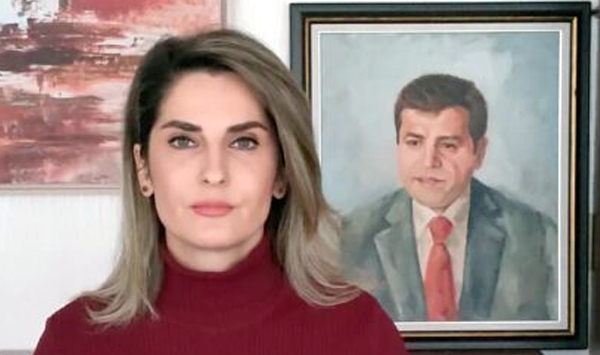 We read in the media that Başak Demirtaş has just been sentenced to two and a half years of prison because of a typo on a medical report concerning a miscarriage !

Başak is a teacher and the companion of Selahattin Demirtaş, the deputy maintained in prison since November 2016, despite the decision of the European Tribunal of Human Rights calling for his immediate release. Indeed, the tribunal considered that Demirtaş’ detention went against “the very heart of the concept of a democratic society”.

Ex-President of the Peoples’ Democratic Party (HDP), Selahattin was imprisoned after his party won a sufficient number of seats during the 2015 general election to destroy Erdoğan’s parliamentary majority. He is saddled with some one hundred accusations the prosecutors attempt to relate to “terrorism”. This represents a totality of hundreds of years in prison. Selahattin Demirtaş, with his usual caustic sense of humor comments: “No problem, if I can live that long, I’ll serve the full sentence.”

Yet again, and for the umpteenth time, let us say that the HDP is systematically reduced in international media to a “pro-Kurdish” party, an unacceptable term, since in fact,  it serves as a common tent for the representation of minority peoples, but also for feminists, ecologists, LGBTIQ+… making it the target of the Turkish regime. Its deputies are revoked, losing their parliamentary immunity, co-Mayors elected by the people are removed from office and replaced by administrators named from above, its members, its sympathisers, even the staff at the snack bar, fill Turkish prisons. And, for months now, social networks of all political hues, united by nationalism, send out appeals for the closing down and prohibition of the HDP. The topic of the “after-closing of the HDP” is debated on television, by one and another pseudo-specialist, politicians of every tendency, except, of course, the main concerned who are constantly kept in the dark…

All of this adds un to a picture of horrible, Kafkaesque political persecution.

The attack against Kurdish opponents is thus ongoing. Always with the same catch-all accusation of “they’re all terrorists!” And when there is no evidence, there is always the possibility of examining…work stoppages because of illness!

On last Thursday, the Diyarbakırtribunal sentenced Başak Demirtaş, and her doctor, to a 30 month prison sentence “for submitting a fraudulent medical report”.

Başak recently declared that neither she nor her two children have been authorized to visit Selahattin Demirtaş since the beginning of the pandemic… I s it now their turn?

The accusations in this ubuesque trial began in March 2018, and are based on hospital admissions, and two surgeries for a miscarriage Başak Demirtaş suffered in 2015. According to her lawyers, the teacher is accused of “fraud” because one of the medical notes providing for a five-day work stoppage was delivered at an appointment on December 11 2015 but erroneously dated …14th of December, four days later. Başak had then taken leave without pay in the second half of the 2015-2016 school year in order to fully recover.

On Twitter, the declaration of the rapporteur for Turkey at the European Parliament, Nacho Sanchez Amor, concerning the sentencing of Başak Demirtaş: “2.5 years of prison for a mere clerical error concerning a medical record is appalling and seems beyond common sense. It just looks so political. It gives the measure of the worrying state of Turkish judiciary.”

And yet, the state of Turkey’s judiciary is an open secret.

But when one notes that, despite participating in the transfer of migrants toward the Belarusian borders, the AKP regime’s airline should escape all sanctions, when one sees that the non-respect of decisions of the European Tribunal concerning Selahattin Demirtaş and Osman Kavala does not even raise an eyebrow, and that the road to possible discussions on Turkey joining the EU remain open, that every time the Turkish regime speaks of migrants, the European Commission jumps, what is surprising about a simple “declaration”?

After the trial, Basak’s lawyers declared that, although the tribunal had decided that the hospital records indicating the dates of her presence should be deposited as evidence, in order to show that an error was committed, the tribunal pronounced the sentence without examining the records. “Despite this situation, we will keep up the judicial struggle. We still believe the sentence will be annulled [by the Court of Appeal] and that justice will prevail”, they said…

Following such a judicial infamy, one can expect close relatives to be targeted next, one way or another. And, mostly, what is worrisome is the absence of strong reactions from those who claim to be leaders of the opposition. In the electoral processes soon to get underway, the CHP for example has not determined its position concerning the Kurds and keeps on flirting with the nationalists, hoping for a crisis and the wearing effect of power  on the AKP+ultra-nationalist tandem.

In Turkey as elsewhere, it’s right-wing all the way.

Başak Demirtaş is yet another victim of this discretionary power  maintaining itself thanks to an ideology that is anti-Kurdish, anti-Migrant, anti-Armenian and other minorities , summarized in the notion of Turcity. These victims, politicians, journalists, authors, plain opponents with a slightly radical bent, are in the thousands, dragged through parodies of justice, then incarcerated. They are so numerous that giving precise and full numbers is almost impossible, although civil society associations still try their best to do so.

As an example, the trial against Aslı Erdoğan, completed in principle, has been reopened on other grounds, just as frivolous as that of  a “wrong date” on a leave of absence leading to prison, while the beneficiaries of corruption, just as the authors of feminicides, are spared, for good behavior or the wearing of a tie.

Order, security, nation, republic, hatred of migrants and of “the other”, terrorism … Those are words that justify lingering over a mistaken date and sentencing to prison the companion of an opponent already incarcerated. Strange, these same words escaped from Turkey buzz like flies out of a garbage can in the fetid air of a certain French electoral campaign.