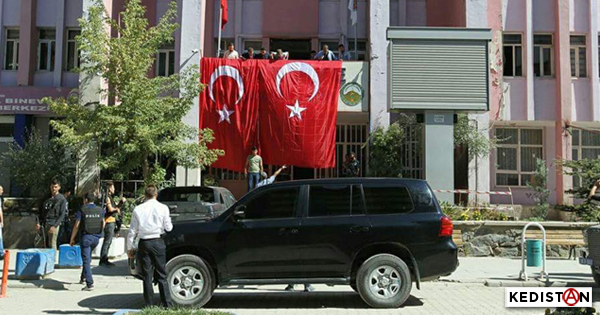 In Southeastern Turkey, « administrators » were designated by decree on 28 Kurdish mayoralties. The democratically elected Co-Mayors were removed from office as of 9 am this morning. Spontaneous demonstrations are occurring in some localities.

In the Sur neighborhood in Amed (Diyarbakır), while City Hall staff were reading a press release in the presence of the Co-Mayor of the Amed Metropolis, Gültan Kışanak, and of HDP parliamentary members Sibel Yiğitalp, Feleknas Uca and Meral Danış Beştaş, police attacked the group with intensive use of water cannons and truncheons. When the protesters took refuge in the offices of the DBP (Democratic Party of the Regions) and of the HDP (People’s Democratic Party), police attempted to break in, ramming down the doors. The people gathered inside pushed them back. Hüseyin Bayram, Deputy secretary of the Amed Metropolis City Hall and one citizen were taken into custody. Police continue to make announcements ordering the demonstrators to break up, but they are refusing to leave.

At about 15h30 (local time) while we write these lines, the standoff continues in a tense atmosphere.

Meanwhile in other Kurdish towns in Turkey, internet connections have been cut off since 00h30 last night. Although the DHA agency announced the block had been lifted at noon, problems persist in some towns. Our contacts in the Southeastern region inform us internet connections are still restricted. They tell us that, following discussions with various service providers, the customer service staff half admitted that the slow-downs were not caused by technical work but they couldn’t say more, being « held to secrecy on this topic » ; which provides unofficial confirmation on the suspicions of official orders for maintenance of the block.

The AKP state of emergency

We should recall that the Turkish Minister of the Interior Süleyman Soylu, had put forward an odd notion in a declaration last September 9: « Within the next 15 days, leadership of 28 mayoralties will come under the control of Qandil. »

The attribution of administrators to replace the mayors was done following the adoption of decree n°674 on September 1st, a state of emergency decree concerning mayors, which provides for removal from their duties of mayors who support or assist « terrorist organizations such as FETÖ, PKK and KCK“.

This decree contravenes to several articles of the Turkish Constitution, to international agreements as well as to the European Agreement on Human Rights, and to the Universal Charter on Basic Human Rights. Local populations experience its implementation as an « administrative coup d’état » and raise the following question: « Where is the difference between those who attempted a putsch on July 15 and those who yell « We’re taking over the leadership ! » and barge into City Halls that are under the responsibility of those elected by the people? »

Of these, 12 have been arrested so far.

The American embassy released a statement on its website:

« We are concerned over the news of conflicts in Southeastern Turkey, following the decision to remove mayors from their duties and replace them with administrators, with the governmental thesis that certain local authorities would be supportive of terrorism.

The United States condemn terrorism and support Turkey’s right to self-defense. We wish to underline the importance of respecting due process of Law, and the respect of individual rights, including the right to peaceful political expression, as recognized in the Turkish constitution, while awaiting the investigations of the Turkish authorities concerning allegations that some local authorities would have joined terrorist groups or given them financial support.

We trust that the attribution of administrators will be temporary and that the citizen will soon be allowed to elect local representatives, as provided for in Turkish laws. »

If it only concerned the mayors…

The attacks and repressive measures against HDP leaders don’t stop with the mayors. The 59 HDP members of parliament are still under the scope of the lifting of their parliamentary immunity for investigative purposes, under the new anti-terrorist law. Arrests were « postponed » because of the failed putsch. The AKP is saving the political and repressive offensive for a favorable moment. We should recall that the lifting of immunity resulted from an unanimous vote by the Assembly – pseudo Kemalist opposition included – against the 59 members of Parliament.

On September 9, Alp Altınörs, Deputy HD Co-President was arrested during a raid on his home. According to a statement from the central bureau of the HDP, Alp Altınörs is being held for the « offense » of participating in the funeral of Zakir Karabulut, one of the victims of the bomb attack committed in Ankara on October 10 2015. Speaking at the ceremony, Alp Altınörs had said of Zakir, a 24 year old student: « Our comrade Zakir was responsible for our organization in Tokat. »

This arrest has no legal basis. 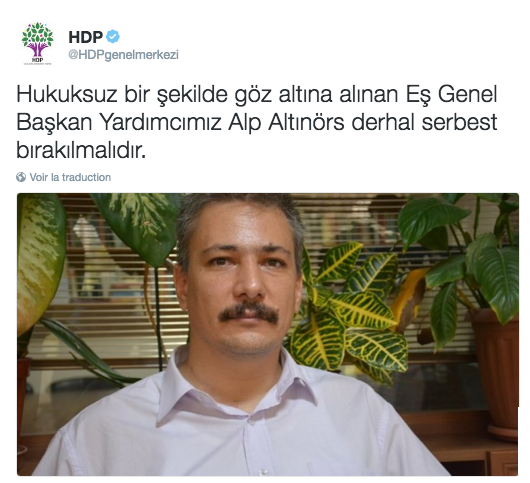 Alp Altınörs, our Deputy Co-President illegally held in custody, must be released immediately.

And lest we forget, a few days ago, 11 301 teachers of which 9 843 were members of the Eğitim-Sen Union, were suspended, after the lawyers, the university professors, the journalists and intellectuals… And the repression under the antiterrorist law and the state of emergency targets only the non-nationalist democratic opposition henceforth, and most of all, its representatives.

We may nonethless express motivated worries over the capacity for a « unified » response in Turkey. The « Peace » movement has remained divided and fragmented over the past year, because of party and movement leaderships that can’t go beyond their Kemalist horizon and now find themselves in an approach based on « national union for democracy and against terror ». The AKP government knows it can strike with no effective response in this context. The political inertia of a pseudo secular opposition adds its weight to the hammer of the state of emergency.

Moreover, reactions outside Turkey that might come from « democrats » in Europe (not to mention the shameful support from European governments) often stop at compassion or, worse, at the magical formula « none of that in our beautiful Europe. » We could at least expect a « professional » defense from teachers’ unions or a « democratic solidarity » from a number of elected representatives. But the electoral drums in some European countries are already drowning out the sound of international issues, except where it comes to refusing « refugees ».

So let us continue providing a sounding board, especially since the domestic offensive is coupled with a Turkish nationalist agression against Rojava outside its borders.

Kedistan must mention that specialists in the practice of the split between their alliances with Erdogan and their inner democratic itches produced a « press release » via their « National Secretary in charge of globalization, regulation, cooperation » in which they specify: « The Socialist Party, attached to the respect of democratic rules and values, condemns this most recent and grave attack on human rights and on the respect of universal suffrage. It calls on the immediate reinstatement in their duties of the mayors, the liberation of the arrested ones and calls on the cessation of actions undertaken against its brother-parties. » Well, it’s better than nothing and should provide the incentive to do more …than stuffing the press release into a drawer.