Migrants • Death as a Weapon is Nothing New 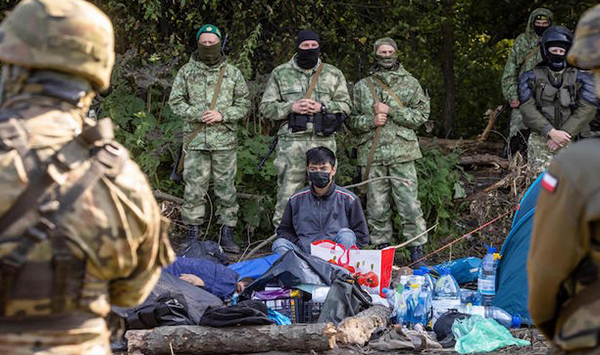 No one can go on pretending they haven’t seen anything of the thousands of migrants backed up against a barbed wire border between Belarus and Poland, used as pawns to settle geopolitical accounts between the EU States and Russia’s satellites.

And for those who haven’t quite caught on to the importance of what is happening there, the probability of  yet another rise in the price of gas should open their eyes soon.

Many editorialists talk of a “new weapon” used by the rogue State of Belarus: instrumentalizing migrants in order to obtain the lifting of sanctions.

The weapon is so new that it was used already in 1947 in order to upset geopolitics in the Middle East. Europe was then busy getting rid of the its Jewish survivors fo the Holocaust and using the opportunity to settle its left-over colonial rivalries, following the bloodletting of a World War. In 2021, the Kingdom of Morocco also used it. This same “novelty” was used recently by the Turkish State and now serves as the definitive barometer between the EU and the Erdoğan regime, in all instances of diverging interests.

Indeed, the European Union has “armed” the Turkish regime against itself, by entrusting it through a renewable financial agreement with the “guarding” of one of its borders. This villainous agreement reached on the back of migrants allows Erdogan to pull the strings from time to time, a practice he has not failed to use in the past few years.

Given that the Turkish national airline, closely linked to those in power, willingly serves as “charter” for migrants headed for Minsk, the hand of Erdoğan would also appear to be present here, in order to please Belarus’ Russian ally.

Sitting in front of a screen, one could spend hours wondering why these Kurdish migrants, Syrians and Irakis for many of them, families, women, children let themselves be trapped by cynical manoeuvers, thus serving as political fodder when they believed they had found an open door to salvation.

Asking this question simply serve to demonstrate how wars and the destitution that follows for entire populations leads to the loss of all judgment when it comes to saving a bit of the life that’s left. The will to survive is the human species’ basic guarantee, and the motivator of all that lives on the planet.

And it won’t be enough on European television stations to allow spokespersons from the Polish extreme right  describing the “mirage of aids and subsidies serving as an incentive” to hide the plain truth, that of the first dozen of recorded deaths,  or whatever the real toll may be, in a zone under full police and military control.

The political decision taken at the first signature with Erdoğan handed the  “migrant” weapon over to  any State involved in a dispute with a member of the EU. And ammunitions to feed this weapon are far from lacking. They are created massively by these same States, directly or indirectly, at the heart of every open or simmering war in the Middle East, and far beyond.

That Belarus seizes the weapon today, when it already has the gas pipeline allowing it to negotiate, is nothing but the demonstration of the xenophobic policy of the EU member States, such that it can give ideas to the most obtuse of autocrats.

This is the pincer one needs to question.

• That of the betrayal of the Kurds, for example, the minute their purpose as cannon fodder against ISIS was less useful for interests in the Middle East, abandoned in open countryside as a consequence of these wars, leaving refugees, displaced persons, social upheavals behind in a race for new alliances or consolidated ones with regional powers as watch dogs, and tacit agreements with Putin’s Russia.

• That of the EU fortress, curled up against its will to fight against migrations, and yet dependent of the opening of its borders to merchandise and financial dealings.

Any rogue State could find there conditions conducive to blackmail, with so much human misery on hand to feed it.

Geography also means that Belarus pushes migrants against a barbed-wire border of one of the European States – along with Hungary – the most opposed to migrations. To such an extent that recently still, it blocked access to Belarusian opponents, when they proved to be democrats not favorable to the Polish clerical extreme right for whom “sovereign” local law takes precedence on signed European commitments on human rights.

And, to top it off, European leaders are already speaking favorably of extending a few millions to strengthen the border, or even set up a wall there.

Clearly, the attitude on display, with the printing press at the ready to churn out more money, has not a thought for the flesh of migrants that may well freeze during the winter. The concern is to plug the hole in Europe’s barrier, prior no doubt to entering into an umpteenth negotiation on gas.

Thus, just as France readies itself for its turn as “European President”, the EU may well offer the Polish regime guarantees, where there was talk of sanctions only days before. The EU’s migratory policy, with is in fact a policy of closure disguised behind judicial verbiage, could slide even further toward the xenophobic position of so-called “sovereignist” States. Already, FRONTEX  has nothing of a welcoming center for human rights.

France, the prey of racist and xenophobic hatred, disguised behind an electoral facade, woul be well served by this.

And even if, faced with the feeling of being overwhelmed to the point of powerlessness, a “petition” appears useless and laughable, being able to count one another, knowing and letting it be known that there still exists somewhere a flame of resistance, cannot do any harm. Sign, have others sign…

I will end by saying that if all eyes are turned toward Poland, no one forgets the watery grave of the Mediterranean, the quasi-internment camps of migrants in Greece, the slavery imposed on migrants in Libya, the drownings in the Channel, the daily repression of migrants in Northern France, in Calais and Dunkerque, the daily and incessant deaths on these roads of exile…To such an extent that I might fail to mention the intra-continental migrations within Africa or in Latin America.

Faced with these migrants, hatred and xenophobia continue to replace what was left of humanism in this capitalist chaos, and the climate crisis that will feed these roads of exile, along with the ongoing wars, does not on the point of putting a halt to identitarian claims born of populism.