Evacuation of Migrants on the Greco-Turkish border 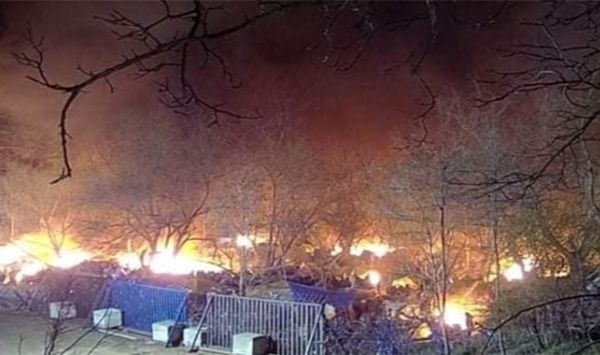 Thousands of migrants who had been waiting for a month now on the Greco-Turkish border were discretely transferred because of the Covid-19 virus, to various towns, in total silence. The migrants and Greece have accused the gendarmes of burning down all the tents.

One Syrian migrant who spoke by phone with Sendika.Org on the morning of March 27 said they had been forced onto the buses: “They told us we would be transferred to Malatya. Some of my friends were sent to Osmaniye. I wanted to go there too, because I’m registered in Adana (a town neighboring Osmaniye). But they wouldn’t let me. We’ve been onboard the bus for hours. We haven’t had anything to eat or drink. There are women, children… The gendarmes in the vehicle only bought something after we protested.”

Later, the same migrant spoke to journalists, confirming they had been taken to the “Beydagi Residential Establishment” in Malatya, which consists of a container camp.

An Iranian migrant contacted by Sendika.Org confirmed for his part that they had been forced onto the buses. He stated that no explanations were given and that they were taken to Beydağı in Malatya. “All our belongings were left behind in Pazarkule. I don’t know what will happen to us, but I’m very much afraid of being deported. I don’t want to be sent back to Iran. We are queuing up now. They will be taking away our phones shortly.”

Other refugees confirmed being transferred to Osmaniye and the “Residential Establishments” of Düziçi, also a container camp. 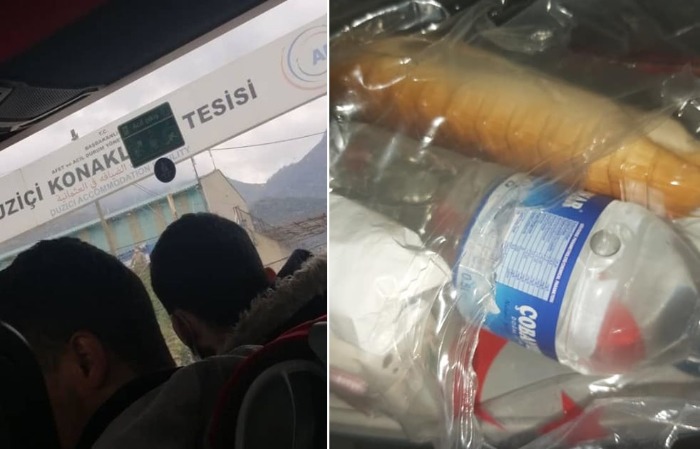 Photos taken by a migrant. The entrance to the Düziçi camp and the food handed out for the trip.

The tents were burned in Pazarkule

Images filmed by a migrant and shared on social networks on March 27 show the burning tents. Conversations are overheard: “The Turkish soldiers are burning down our tents! They are chasing us away from here!”

Moreover, the Greek government accused the Turkish authorities of burning down the tents prior to even beginning the evacuation of the migrants.

The Turkish Minister of the Interior Süleyman Soylu announced that 5 800 migrants were spread out over 9 towns and “greeted” in retention centers where they will be quarantined for 14 days. In Turkey, the literal translation for the retention centers is “Expulsion centers”.

He also provided information concerning those Algerians whose return was refused by Algeria and who were stuck inside Istanbul airport. They will be sent back to Karabük, between Ankara and the Black Sea Coast.

Without speaking its name…

Süleyman Soylu did not fail to send a message to Europe: “We were forced to perform this operation as a precaution. But no one should feel relieved over it. Once the risk of contamination will have disappeared, we won’t say no to those who want to return to Pazarkule. All we did was to take measures out of health and humanitarian concerns.”

A common appeal by international organizations

While the Turkish government is thus “greeting” today those migrants it had previously “invited” to head for the border, 21 international organizations published an urgent appeal today, concerning the migrants facing Covid-19.

“While the world is confronted to the COVID-19 pandemic, the risks for the refugees on the Greek islands increase hourly. Henceforth they are also confronted by the threat of the pandemic, the consequences of which would be catastrophic for the people confined inside the camps.”

Here is the link to the Amnesty International website in order to sign the petition: Greece: Urgently protect refugees from COVID-19

You may also want to read: European border: staying, going back, which is the hardest?