European border: staying, going back, which is the hardest? 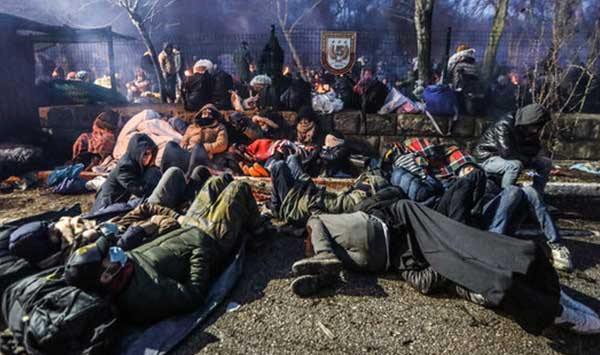 The Greco-Turkish border has seen a considerable arrival of migrants due to the Turkish regime’s blackmail on the European Union. Here also, the “coronavirus” is acting as a revealer, as well as a threat.

The report by Vecih Cuzdan was published in Turkish on Taz Gazete on March 19 2020.

The Turkish Minister of the Interior has closed the border toward Greece because of the coronavirus. Turned back at the border, the migrants attempt to pick up their life in Turkey. Some are determined in not coming back.

Mahyar who worked for a barber in the Esenler neighborhood in Istanbul who only hired Iranians, received an unexpected phone call on February 28. A colleague who hadn’t shown up for work was calling. This is how Mahyar learned that the borders were open. He decided to seize the opportunity. With ten other people, including his companion Mariam and three colleagues, he rented a minibus at a cost of 170€ and headed for Edirne. Once there, while posing for journalists they met, they figured this would be their last photo of Turkey where they had been living for a year or so.

But when they saw how the Greek security forces were acting at the border, they decided to head back immediately to Istanbul. Where Mahyar now waits, once again, for the same customers in the same barber shop. He wears a cap bearing the following words: “My life is my life”. He speaks, lowering his head: “So it wasn’t the right moment to head for Europe. Even if we had managed to make it into Greece, we would have been stuck over there. The Turkish government and the media lied to us.”

Following the Turkish government’s message at the end of February “we have opened the doors”, tens of thousands of migrants travelled toward the Greco-Turkish border. From the onset of the crisis, the Minister of the Interior, Süleyman Soylu had communicated daily figures of people who had entered Europe. His last declaration was on March 7th. Claiming that the number of migrants who had crossed the border numbered over 143,000, Soylu spoke enouraging words: “The weather is warm now and the temperature is still rising. The water level is down to 45 cm in certain areas. This means you can cross over on foot.”

Because of the problems finding shelter, food and hygienic conditions, along with the uncertainty of the situation, a number of people went back to the towns they had left. President Erdogan, criticized for his policies, held a videoconference on March 17 with Angela Merkel, Emmanuel Macron and Boris Johnson. The European leaders said they were favorable to financial aid for Turkey from the European Union, so that the migrants remain in Turkey. The following day, the Turkish Minister of the Interior announced that the Greek and Bulgarian borders were closed due to the coronavirus. Following this decision, it is expected that those who have gone on waiting for three weeks in the buffer zone between the borders of Pazarkule and Kastanies will be sent back to Istanbul. Despite heading back to Istanbul, Mahyar (28) and his companion Miriam (24) have not lived down what they experienced at the border. Mariam, who works part-time in a beauty salon and sells on Instagram dresses she creates says she fell into a depression upon returning from Edirne. She says it was not easy, seeing all those people sleeping under tarps and speaks of how she felt when one of the gas pellets fell at her feet. “I couldn’t breathe, I couldn’t think. All I heard were voices. Women screaming, children crying…all I wanted was to flee.” She says she has tried talking with her friends, and getting back to a daily routine. “We had things to lose, even if they were very few things. We tried to cling to them.”

Syrians with a “temporary protection” status in Turkey are allowed to work, under specific conditions and limitations. Most of the migrants from Iran, Irak or Afghanistan have less rights. For example, the residency permit, based on visa agreements between Iran and Turkey, cannot extend more than a total of 90 days every 6 months. Strangers with no legal status must pay a “residency tax” during their stay in Turkey.

According to Mahyar, Turkey sees refugees as tourists and only cares about their money: “One day they say ‘you can stay’, the next day ‘we won’t give out any more residency permits’. If you have money, buy an apartment and become a citizen. If you have no money, you have no business being here. It is not a stable situation.” Mahyar mentions they had sought permission from their boss who is a good and understanding person: “We told him we would come back if we couldn’t get through. He said ‘ok’ and gave us two, three days for the attempt.”

This is not the case for many people who have been waiting by the border for the past three weeks. The migrants patiently waiting , faced by barricades, blocks of concrete and barbed wire have no life waiting for them in Istanbul. On March 13, two young Afghanis began a hunger strike and sewed their mouths shut as a protest against what is going on on the border.

An activist who does not wish to be identified and who has been following events on the border for the past 20 days, says people from Afghanistan are numerous in the zone: “Among them, the majority feels they were tricked. Most of them had a more or less settled life and came here, leaving a house, leaving a job. Some don’t want to go back for that very reason, they say they don’t know what they will would do if they went back.

“Negotiations are ongoing, perhaps there will be some result”

Kusay, a Syrian, has been “sheltering” for the past two weeks with his family under a makeshift tent. The zone being closed off to all media except those close to the government, Taz Gazete was able to reach Kusay anyway, over the phone. He explained they were trying to stay clean by washing in the river, stand in line for hours in order to eat. Kusay says he must provide his fingerprints in order to leave the zone and go to a supermarket some three kilometers away and for this procedure in itself, he must wait in line for hours.

Among the migrants who learned the borders would be closed, there are some who boarded the buses waiting to take them back to Istanbul, but there are others still attempting to cross into Greece by cutting through the barbed wire… Kusay says he wants to wait here, at least for a few more days, despite everything. There is no work waiting for him in Istanbul: “Perhaps there will be some positive result, following the negotiations between Erdogan and the European leaders.”

From time to time, Kusay hears bit of news. In a group on Telegram titled “The procession breaking through borders”, there are news and the mention of any progress. There is also confirmed information… One Syrian writes “Negotiations are ongoing, perhaps there will be some result”. Another shares a video of an extraordinary session at the German Parliament under the heading “The Europan Union votes for the migrants’ situation.” At times, over one thousand messages are published. People no longer know who they should believe. Hope that springs up suddenly disappears just as quickly. But the reality in Europe is that what is happening on the border is discussed less and less as the days go by. Because, henceforth, coronavirus defines what is news and what isn’t…

Academic Cavidan Soykan who works on themes of human rights, asylum and migration, also states that, because of the coronavirus, the media no longer provide information concerning the people crammed at the borders and that the “open door” policy is coming to an end. She adds that persons who are sent toward the border may find themselves with jail sentences or fines for having left the town where they were registered and points out that the current situation leads to an increase in racist attacks against the migrants: “I’m concerned by the thought that, should Covid-19 become a serious epidemic, the price for this will be paid by the migrants forced to return from the border”.

In the barbershop in Esenler, the news has also changed. The couple who came from Iran to Turkey with the hope of a life more free and secure has put a hold on its dream of reaching Europe for the time being. They are nonetheless convinced that Turkey holds no promise of a future for them. Mahyar goes on working 12 hours a day. In this large and spacious salon, on the ground floor of a recently built building, half of what each customer pays for a shave, is for him.

After a moment’s silence, he asks the question bothering him: “does the coronavirus also touch barbers?”

You may use and share Kedistan’s articles and translations, specifying the source and adding a link in order to respect the writer(s) and translator(s) work. Thank you.
*A word to English-speaking readers: in all instances where the original text is in Turkish or Kurdish, the English version is derived from French translations. Inevitably, some shift in meaning occurs with each translation. Hopefully, the intent of the original is preserved in all cases. While an ideal situation would call for a direct translation from the original, access to information remains our main objective in this exercise and, we hope, makes more sense than would a translation provided by AI…