Little Amal • A small giant on the migratory road 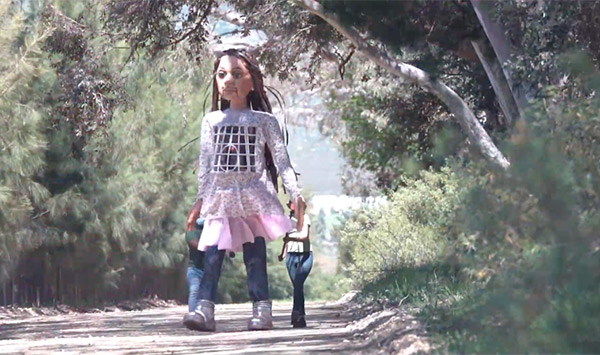 By Nilüfer Ovalıoğlu Gros, initially published in French in the Contemporary Turkey Observatory on May 15 2021.

The rest of this article, to be published shortly, will relate the journey. Little Amal is currently crossing France at the moment, after a halt in the Roya Valley. The pandemic and a few incidents delayed the trip, which should end in Manchester in July 2021.

As this initiative is not receiving the attention it should, French media proving more interested by anti-migrants than by those who talk about what they know, for instance, we pick up this article to be followed by a second, brought up to date. Thus, everyone will have some idea of the genesis of the project.

Little Amal is a huge puppet who will begin a journey of 8,000 km in Gaziantep, the Turkish town home to a number of immigrants near the Syrian border in Turkey. In July 2021, she will cross the South of Anatolia, on foot, accompanied by a team of puppeteers. She will go through Adana, Anamur, Antalya, Denizli, Ephesus, Izmir, Çeşme and will take the boat to Greece. She will then begin a tour that will pass through Italy, France, Switzerland, Germany, Belgium and land in the United-Kingdom. Her journey is intended as a way to cast light on the crisis around the welcoming of refugees. From the height of her 3,5 meters, Little Amal represents millions of children forced to leave their home in desperate circumstances.

This project, The Walk, was created by the theater company Good Chance, in collaboration with Handspring Puppet Company, by the world-renowed South African creators of the production War Horse, under the artistic direction of Amir Nizar Zuabi, award winning dramatist in Jerusalem and former associate director of the Young Vic in London. Producer Stephen Daldry, English director, theater director and producer, known for his his production of the musical Billy Elliot and the film The Hours joined them for the realization of the project.

Little Amal’s walk evokes the inherent impulse to mobility in human history, since the beginnings of the laying down of the first communities. Little Amal’s journey is rich with historical, cultural traces of wanderings, travels, exiles and migrations across continents and centuries. The little girl as archetype is embedded in the collective memory of the Mesopotamian region where the mobility of men and women is a strong feature, and where the first commercial roads were laid down. In regional tales, the little girl takes off for an initiatory voyage, searching for her unknown brothers, or else she follows a mysterious suitor through moutains and forests. She represents the anxiety of and around this girl-child on the unknown roads, filled with danger, far from home.

The Anatolian region in the south-east is the repository of now-tabu stories about children and women exiles who perished on these roads, notably during the Armenian genocide in 1915. These tales combine, shoring up regional tales and myths.

On her road toward the Aegean sea, Little Amal will pass through the territories of Homer’s Odyssey, the mythical tale that will accompany her through the regions of Southern Turkey all the way to Greece. Once in Europe, she will follow the ancient pilgrimage routes, that of Saint-Jacques de Compostelle as well as those taken by Italian, Polish, Turkish, Kurdish migrants who contributed to the European reconstruction following the Second World War.

This highly significant public work brings to play the human impulse consisting of mobilizing and moving on, leaving the sedentary life behind. It reminds us of the precariousness in which women, girls and all children find themselves when armed conflicts, wars, natural catastrophies force them to emigrate.

It is also a period, our own, in which theater and performance, the arts in general, are faced with a major crisis linked to the pandemic. This creation proposes to revisit, and renew the debate on the nature and role of the arts, of activism and of resistance.

In building this gigantic body of a puppet as the incarnation for the prototype of “the little refugee girl”, and launching her across fields and conflicting frontiers – the greco-turk or the french-english borders – and facilitating her interaction with the people met along the way, the creators draw attention to the necessity of art in our lives, the responsibility of artists in a hyper-media controlled world where the little refugee girl is but a shadow across our screens.

In their collective work Vulnerability in Resistance, Judith Butler, Zeynep Gambetti and Leticia Sabsay raise the question: “What would change in our political frameworks if we could imagine vulnerability as one of the conditions for the very possibility of resistance?” The puppet’s creators bring before our eyes this ownership of vulnerability. A vulnerability magnified by this theatrical object which is Little Amal and which now walks on the roads followed since the beginnings of humanity, an archetype of the human story, now known as the “emigrant”.

The giant doll and her journey evoke the tragic journey of another artist, Pippa Bacca, who left from Milano to hitchike acros the Middle East after crossing Slovenia, Croatia, Bosnia, Serbia, Bulgaria, Turkey, Van, Syrian Egypt, Jordan and Israel. Her journey aimed to operate “a marriage between different peoples and nations” by her symbolic wearing of a wedding gown all along this experiment. This gown was to be a witness, gathering all the memories on herself, consuming and dirtying itself. Upon arrival in Gebze in Turkey in 2008, she had a bad encounter, was raped and murdered. The tragedy here amplifies the journey of women, war, gender-based vulnerability and borders that dehumanize.

Little Amal’s journey will end festively by a large-scale event during the Manchester International Festival in November 2021.

Nilüfer Ovalıoğlu Gros is a contemporary theater artist from Turkey. She has taught and created in the United States, England and Turkey. Between 2013- 2017 she founded the Crossing Theater Company in Mardin near the Syrian border of Turkey. Together with local participants she created post-dramatic plays based on the testimonies and sounds from the region. Nilüfer has published in scientific journals such as Performing Arts Journal and Journal of Embodied Research. Her research and creations are based on socio-cultural performances charged with the transmission of history through bodies.