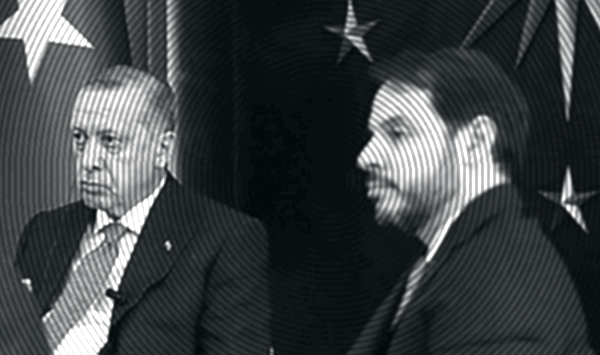 Berat Albayrak, Erdoğan’s son-in-law, resigned as Minister of Treasury and Finance three months ago. In need of a break? Family feuds? Fed up with the father-in-law? Go figure.

Whatever the reason, this did not escape the attention of politicians in the opposition, always ready to go searching for leaking billions somewhere. And for a Minister of the National Treasury to bow out just as questions are raised concerning the Reserve and the 128 billion that melted under the early winter sun, obviously leads to …questions.

Until now, the father-in-law had pretended to ignore the issue but under pressure from parliamentarians and the CHP opposition, he had to respond somehow.

Of course, Erdoğan defended his family. Attacking his son-in-law means attacking me and through me, Eternal Turkey in its past, present and future radiance.

That sums up the line of defense, more or less. He chose to deliver it on the stage of the 7th regular Provincial Congress of the AKP in Izmir. In this case, no flights toward the moon and the stars, but a return to fundamentals.

“External enemies will not win. Their attempts have already failed in the gulf of Izmir.” This is more or less what he said, in a distant reference to “Sèvres”, i.e. those nasties who wanted to invade what was not yet Turkey a century ago, and today’s nasties who want to strangle Turkey and keep the gas from gassing away. Giving rise to leaks no doubt, justified as follows: “With the pandemic, it was necessary to take precautions against financial fluctuations on the international scene. Planned and controlled currency exchange activities took place. All those transactions were done according to market rules and are perfectly legal. Neither the evaporation of foreign currency nor unjustified gains were involved. Thanks to these currency operations, our country managed to maintain its objectives on the international scene.”

And from there, a segue into the billions that had to be reimbursed to the IMF. In other words, justifications for the son-in-law’s so well-accomplished missions, while he was also busy handling ship navigation in the Mediterranean. We can better understand the poor young man’s need for a rest.

But Erdoğan didn’t stop there. He was in Izmir, a fiefdom of the CHP so he had to answer those who were attacking said son-in-law and, mostly, who had not been supportive enough of the “Garê exploit“.

In a learned blend of outside snide and devious enemies with those supporting “terrorism”, he took aim at the local scene.

According to him, Izmir may be familiar with the PKK but still does not understand. And since Izmir is not a model when it comes to supporting the AKP, Erdogan spoke directly to his national political opponents of the CHP, denouncing them as being accommodating toward:
“That terrorist organization that kills people, children in the womb, mothers, grand-mothers and elderly men with white beards, for close to 40 years. Oooh, CHP, Ooooh Kılıçdaroğlu, have you never visited the district of Diyarbakir? Instead of condemning the terrorist organization as an honorable position would dictate, you accuse the State, supposedly tormented by the murder of innocents.”

There you go, Erdoğan kicked back the ball concerning the son-in-law and launched into “We, we are everywhere, on every one of the terrorists’ roads“.

And that is very, very expensive, as everyone knows. In human lives, but also in supplies, ammunition, logistics, but also in substantial subsidies for the “proxis”, those militias sent to Lybia, developed in Syria, thrown against Armenia… A permanent state of war keeps up the morale in the deep state, solidifies the alliance with the ultra-nationalists, but it costs money to the cartel and to the family. Here, this is me talking, and with me a few others who still think in Turkey, something that bothers the higher ups.

We may learn some day if the son-in-law disagreed or not on some of the financing, or if he was too greedy at the bargaining table. But what we do understand, is that Erdoğan had to come out of the woods, to avoid the gas leak spreading all the way to his own feet.