Selahattin Demirtaş • Are you well and good? 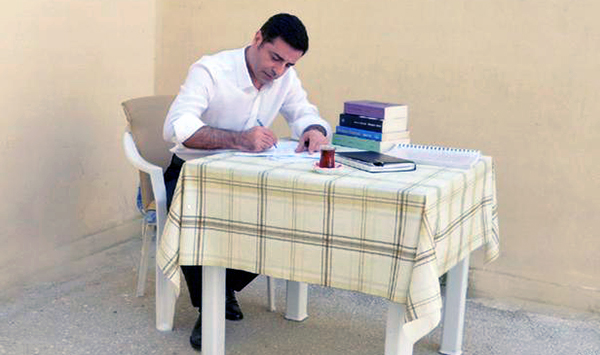 Incarcerated in the prison of Edirne in the Northwestern part of Turkey since November 2016, the former Co-president of the Peoples’ Democratic Party (HDP) Selahattin Demirtaş wrote an article for the information website T24, published in Turkish on February 22nd.

Are you well and good?

I grabbed hold of pencil and paper and wrote a few lines for the outside world. Outside, many people write and speak despite everything. I know. And of course, each one of them is precious. I would simply like to contribute to these discussions. I don’t intend to talk in the void to say nothing. Who knows, perhaps before this text reaches you, you will all have left to conquer space. When we come out of here, I would be a bit sad to find the country empty, but too bad for me, I would be glad for you. But before you go, take some woolen socks with you, space is cool in this season. And also, don’t forget the bread, because over there, you won’t find any, even suspended.1a solidarity practice, similar to the paid-for coffee ‘suspended’ in French coffee shops

Are you currently unemployed?

If you don’t mind, I’ll start by a long political analysis of the Middle-East, and even of the whole world. The European Union pressure, the Joe Biden effect, Lybia, Syria, the Eastern Mediterranean, Greece, Azerbaïdjan, energy policies, the S-400, imperalism and, of course, down with capitalism. True enough, these are not matters to be ignored but I think that, just as I am, you are also tired of these profound analyses that serve as screens.

By the way, are you hungry?

So I will give you the benefit of my profound views concerning domestic policies: new alliances, resignations, cracks, jumps, new Constitutions, newer new Constitutions, sparkling Parties, rarely used second-hand Parties, more than perfect Parties ready for an alliance negotiated from landlord to landord, Parties with an objective of 50+1%, partly negotiated, Parties standing a good meter away from “terrorism”, Parties that have put the meter in the wrong place… If you think that is not enough, I will try to help you a bit more: the oh-so democratic system of parliamentarism for the reinforced solo President, the system of parliamentary prayers for the President who has lost his strength, the presidential system devoid of Constitution of the president, apparently parliamentaristic semi-president weakening the traitors to the homeland, defying the democratic President of the Republic in person…

And most important, are you well and good?

When saying “are you well and good”… Are you a good person? Meaning, honest and virtuous? If your answer is “yes” keep on reading… (Then again, who would answer “I am bad”?)

Notions such as “good” and “evil” are not like unemployment or hunger, neat, solid notions. But they are not completely limitless, totally abstract and uncertain. Since Noah, seven thousand years ago, universal principles of good and evil are more or less defined. The prophet Noah had quoted them as being the “seven laws”. I don’t think it useful to list them for you. Then every messenger, every prophet, Moses, Jesus, Mohammed passed on similar things. Buddha’s five principles, Mani’s eight principles, Zarathustra’s teaching all repeat the same appeals, essentially. Philosophers, learned ones, revolutionary leaders, just kings, artists, erudite ones…have called on similar notions for the universal good for thousands of years. You have probably built your “good” following the call that appealed to you, depending on your nature. I rely on the soundness of your structure and skip this part.

The state of being “well and good” I am speaking of, refers to your attitude today when facing what is current. What is your attitude toward evil currently, in the present, this intense, solid and pure evil? Are you on the side of evil or of the good? Wait a minute! Is there not a certain ambiguity here also? You are right. So, let’s be concrete by pursuing with a test. In the light of universal principles, with questions relative to our current situation, let’s do a bit of testing on our goodness.

The next elections will be between good and evil

I end my questions here, you have well understood what my concerns are. So? Are you well and good? I don’t know for which system of government you are, of which political party you are a sympathizer, what religion you practice, what language you speak, but none of these choices define in my eyes if you are a good or an evil person. The sincere answers you provide to the questions above and other similar ones determine if you are good or evil.

On this basis, I can say the following clearly: The next elections will not be between political parties, identities or beliefs; they will be between the good and the evil.

If you are on the side of the good, then your position is clear: you have no need to be undecided. There is some good and some evil in all parties, more or less. What I’m talking about here is the fact that all those who are for the good assemble together and raise their voices. They must stand side by side, in round tables, in TV programs, in democratic initiatives and actions, and they must force all political parties into the alliance for the good. Conceptually, this could be called the “democratic alliance”. Thus, we must lead society into the situation of making a real choice. This is how we must call on the AKP and on its electorate.

Democracy will emerge from an alliance of differences

Today, other distinctions, other polarizations make no sense, they are useless or even harmful.

Above all, we must be good people, we must gather as good people and establish the power of good people. Then, we must spread good in all of society and make it permanent. By achieving this we will be able to resolve all our problems, easily and peacefully. Then, we can completely solve our hunger, our unemployment and our lack of democracy. Only in these circumstance will we be able to prepare a new constitution, which is a social contract, and establish peace.

So, I say: no matter what they say about this on the outside, don’t believe it, don’t follow it.

Hoping for help from an approach whose soul is darkened by evil and hatred would be a big mistake. In all the colored political spectrum, there must be at least one Party that will represent you correctly. I would like to insist that you choose solely in terms of those who favor the good. Don’t forget that democracy will emerge from an alliance of differences. Those who do not seek alliance, cooperation, solidarity in the good, those who spread corruption, those who impose their personal expectations and the perennity of their Party, rest assured, they are evil, they are on the side of evil.

Do not give credence to empty discussions and sterile arguments. Lend your ear, not to those who say “me, I” but to those who say “we, all of us”. And, of course, be brave. Do not step back, even by a single step, from the democratic and legitimate struggle. And remind the fake Gestapo leaders, the phony Goebbels: “Take your hands off the throat of the people and off Boğaziçi!” 2In Turkish, a play on the words “boğaz” throat and Boğaziçi, the University of the Bosphorus. Remain calm, close your eyes and listen to the voice of the universe. You will hear a hum rising from the depths. Do you know what it is? It is the wheel turning. Even in space!

So let’s end on a song: 3From a song by Ruhi Su titled “Three girls on Sisli Square, about three young women killed during the events of May 1st 1977, Nergis (narcissus) Çiğdem (dew) mentioned in the beginning of the song supposedly dedicated to the third Sabah (morning).