Turkey • Is Erdoğan on his way out? 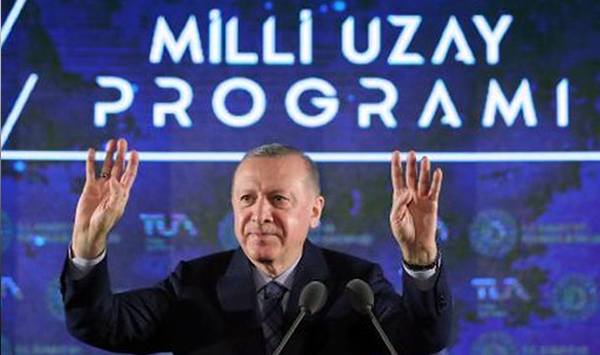 In Turkey, every day brings a new siz­zling-hot top­ic. Today, it’s the debate around… Cacabey.

I know, in Eng­lish you are going to inter­pret this and think lord-knows what. But it has noth­ing to do with what you’re thinking…

So much for the his­to­ry and the name of the Bey. And mov­ing from astron­o­my to the stars, the moon and Erdo­gan’s lat­est speech takes no more than one lev­el of a space rock­et. Because, yes, Erdo­gan took us on a tour of the Milky Way, no lat­er than yes­ter­day. And he con­clud­ed his inter­ven­tion with an appeal to find a Turk­ish equiv­a­lent for the name of “cos­mo­naut” or “astro­naut”.

I bet you’ll nev­er guess who was the first to answer this enig­ma – none oth­er than our Devlet Bahçeli.

The USSR had sent a dog into space, our ultra nation­al­ist made a grey wolf type of pro­pos­al. He was thus the one who first brought Cacabey.

This some­what annoyed Dame Mer­al Akşen­er of the Good Par­ty (IYI). She had a name on the tip of her tongue, but the one who is even more nation­al­is­tic than she beat her to the punch. She sat­i­fied her­self with com­ment­ing Erdoğan’s space flights, more or less by say­ing: “even if it’s always the same thing, every time there is talk of major works, what is inter­est­ing it that it is always inter­est­ing.” Inter­est­ing, no?

One sees here that our polit­i­cans need to be seen and do so with sub­tleties it will be the Turk­ish man on the street’s duty to decipher.

Why the hell all these sto­ries con­cern­ing a Turk­ish space pro­gram? Is Erdoğan on his way out?

Of course not, the rock­et is not ready yet. But I’m not lying to you, space is the news of the day in Turkey, the one that erased yes­ter­day’s news and that will be replaced by tomor­row’s.

I would also have a name to sug­gest to the Reis: Boğaz­içi. But that’s too recent, yes?

Before talk­ing about space, Erdoğan served up a speech from the oth­er side of the moon these past few days to the region­al con­gress­es of his AKP Par­ty, wax­ing lyri­cal about Turkey great­ness, issu­ing dire warn­ings against its domes­tic and exter­nal ene­mies who wish to harm it, as usu­al, and explain­ing how he will raise Turkey to the “Top 10 of Nations”.

He also shared a few con­cerns, in pass­ing, over what he called “inter­nal harass­ments” requir­ing the need to obtain the sup­port of more than half of the Turk­ish pop­u­la­tion in order to con­sol­i­date the pres­i­den­cy and the insti­tu­tions, along with the agree­ments required to obtain this result. Around him, of course. The bat­tle is far from won.

In con­clu­sion, he invit­ed every­one to look up at the moon. Of course, every­one saw the finger.

This is why Erdoğan trans­formed Hagia Sophia: