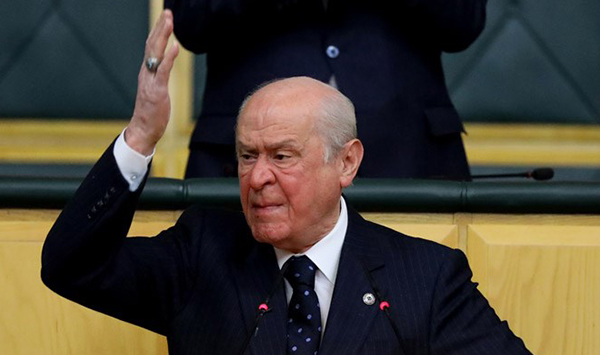 The President of the Nationalist Action Party of Turkey (MHP) issued declarations on his twitter account concerning “provocateurs” at Boğaziçi University, following the designation by Erdoğan of Melih Bulu as administrator-tutor, as a replacement to the “rector”.

Here is the translation, as faithful as possible, respecting Devlet Bahçeli’s typical outrageousness.

The pernicious and ongoing protests at Boğaziçi University take on their full meaning beyond the usual empty reactions to the consensual and legitimate nomination of a rector, in accordance to the law. Provocateurs who wish to strangle Turkey are attempting to establish a fixation point in Boğaziçi.

Interior and exterior forces playing with the sensibilities of our nation with terms such as “liberty”, targeting its sacred character as a “democracy”, undermining the foundations of its serenity and social peace as a “right to education” are all aimed at the propagation of illegal protests through the pawns they have enrolled.

Boğaziçi University which has been in the news for 28 days in our country, has not been the scene of a search for democratic rights or of an innocent student protest. What has sheltered under the gates of this university are not students but all kinds of groups of vermin and anarchists. Indeed, all of this is obvious.

If the entrane to Bogaziçi University is padlocked, it is in order to restrict their zone for maneuver and action. The problem is not a student question nor one about the rectorate. The real issue is spreading in the social body a possible agitation concerning universities and thus, to politize it.

The Republican People’s Party (CHP), the Peoples’ Democratic Party (HDP), the Workers Party (IP) and their allies have directly participated in the game playing out at Bogaziçi University. As for the pseudo academics who turned their back on the university, seen from another angle, with this twisted attitude, they opened their arms to Turkey’s opponents.

Those who turn their back on science, offering their faces up to darkness, their shoulders to confusion, their confirmation to the crisis, their support to chaos. Moreover, they do not say a word about the fact that tchapouldjou 1term dating from the Gezi rebellions in 2013, used by authorities to designate the protesters: vandals, marauders, loafers insult our sacred values. They know full well that if they do not keep quiet, they will be repudiated by their blind ideological groups.

Those who praise the ones who curse the nation and its spirituality in unison, who puruse thess combined obectives are not intellectuals but parasites. As the now-deceased Cemil Meriç2Turkish writer and translator author of various articles in social sciences and twelve books (1916 – 1987). had so aptly said – “our intellectual is not the enemy of religion but of Islam.” Is this pertinent observation not a bitter truth? 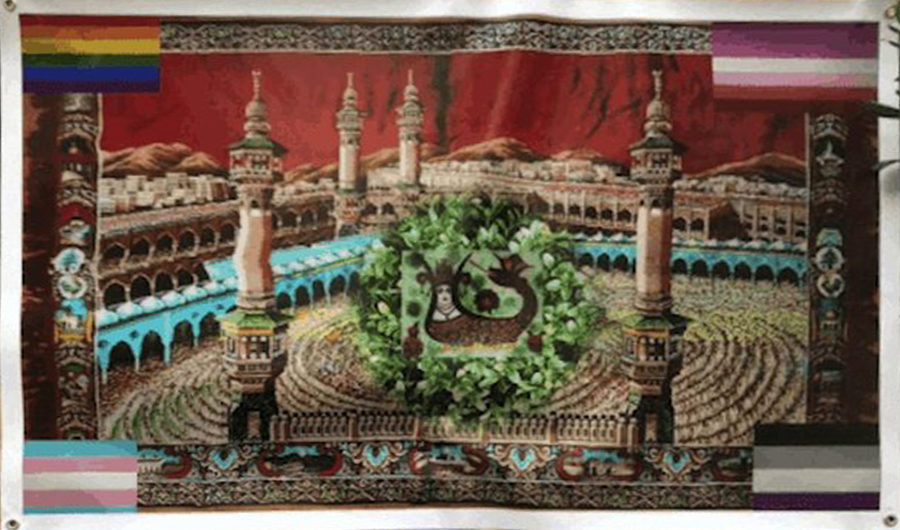 Shahmeran is a mythological creature found in the cultures of Anatolia, Iran and Irak. She has a woman’s head and the body of a snake.

Last Friday, the fact that a rag with an LGBT-I theme, bearing a figure of Shahmeran, was hung on an image of the Kaaba did not bother anyone who pretended to be an intellectual. The authors of this ignoble act have no link whatsoever with the fact of being a student, nor with education and even less with aspirations to science or knowledge.

Those who humiliate the Kaaba are not different from Yazid’s soldiers who, centuries ago, bombed this temple with catapults and destroyed it; nor with the governor of Yemen, Abraha and his soldiers on whose heads the birds of Ababils rained down stones; or even terrorists who seizde the Grand Mosque on November 20 1979.

I curse those who insult the Kabe-i Muazzama. With all my heart, I am convinced that the authors, both visible and invisible, will meet the punishment they deserve before justice and the collective conscience. Ô heartless ones, if you are not afraid of his subjects, then fear Allah Himself. Stay far away from us, and close to your atrocious end.”

These are declarations from the MHP (ultra-nationalist) component of the regime, in addition to those from the AKP against the student movement begun in January at Boğaziçi University. This mobilization is ongoing and receiving support in Turkey. Demonstrations are forbidden and repressed. Today, February 1st, demonstrators were arrested again while young “grey wolves” were holding a counter-demonstration.

The charge by the ultra-nationalists resembles those launched against the Academics for Peace in early 2016 whom the regime described as “obscure ignoramus”. We know of the purges that followed, using as an alibi a connection with the attempted coup in July 2016. Some mafia groups already allied to the current cartel holding power threatened a “blood bath”.

The alliance at the head of the regime is still traumatized by the events at Gezi in 2013, events that durably shook up the Turkish political landscape. This is again apparent here.

We also notice that the ultra-nationalist wing is addressing the bigots and religiously-inclined as well as those for whom Turcity is an important concept, against the interior and the exterior enemy. The recurrent theme of the “so-called” intellectual as an “enemy of Islam” in the mouth of a Kemalist should also be matter for reflection for those in Europe forever evoking nostalgically a “secular-compatible Turkey”.

Despite the pandemic, part of youth, supported by a few in the teaching environment who have escaped the purges at the end of 2016, are maintaining a protest that has gone far beyond the initial reason concerning the nomination of a rector/tutor by the regime. It is a matter of defending the remaining pockets of resistance against a bigotted obscurantism, the generalization of ignorance erected as a model to control consciousness, the social back-pedalling concerning LGBTIQ minorities and women.

The soft political underbelly in Turkey (CHP and consort) that contributed to retreating after Gezi is cornered once again. No doubt that if its ageing president declines along with his entire ageing social base, only youth can insure a continuity that would allow him to move forward on a few advantages conquered at the last municipal elections. As for the HDP, the Party that had collected the majority of hopes from Gezi, should the coalition in power be victorious against youth again, and should repression become even stronger, the wish for its disappearance should accelerate within the power group.

In darkness and indifference, a confrontation is taking place the ending of which, although isolated, could bear on the post-pandemic period, when the monsters in Turkey’s economic and social crises will reappear along with the contradictions they contain. And, in this perspective, it is obvious that ultra-nationalism, so effective for military interventions beyond the borders, is much less efficient.

Visible and organized support to Turkey’s youth and its still-resisting University, would be most welcome.