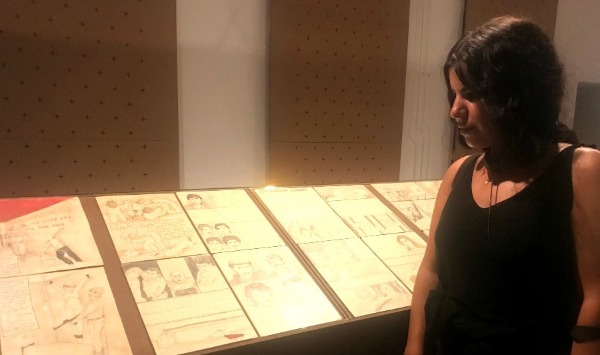 Despite also being a collateral victim of the Covid-19 pandemic, Berlin’s Biennial is carrying on with this fall opening.

This 11th edition of Berlin’s Contemporary Art Biennial is thus demonstrating resistance and, in fact, concentrating a part of its exhibitions to international artists whose pens, eyes and tongues are far from silent.

Our friend Zehra was thus a logical choice for this 11th edition.

Although a number of public “performances” have been cancelled, several exhibitions are taking place in four different venues in Berlin in one of which Zehra Doğan reveals to the public the 103 original drawings of a “prison graphic novel” done in clandestinity during her over two years of imprisonment. This work will be published as an album in a French version in early 2021 by Editions Delcourt.

The originals exhibited in Berlin, under the title “Xêzên Dizî” (The Hidden Drawings in Kurdish)done with the unpredictable supplies available in prison where Zehra was forbidden the use of art materials, are drawn on wrapping paper in the format of the long letters she received from her friend and confidante, Naz Oke. This correspondence of over two years’ duration was published in France by Editions des Femmes, under the title “Nous aurons aussi de beaux jours“ at the end of 2019. It is available in bookstores.

The writings and drawings combine to provide a description of the carceral universe in Turkey and bring historical context to the Kurdish, struggle and that of women, while also providing the tale of a daily life, undoubtedly difficult yet filled with solidarity.

The storyboard, each drawing of which escaped, one by one, from prison N° 5 in Diyarbakır, known as the “Amed Gaol” tell the tale of the decades of Kurdish resistance carried out within its stone walls. Thus, this Biennial will also shed light on the history of the Kurds of which a number are now in exile in Germany. (Venue: KW Institute for Contemporary Art, Berlin).

Prior to the Berlin Biennial, at the end of 2019, Zehra Doğan’s participation was sollicited for a collective exhibition in New York at the Drawing Center on the theme of Art as resistance to imprisonment. Among other items she exhibited there dresses drawn and painted in prison which whatever she had on hand, and which were then smuggled out as laundry.

Those years of prohibition which were years of resistance through Art for Zehra, mostly collectively with her co-detainees, finally brought her to produce over 400 works on many different media, using extremely varied materials, including the use of menstrual blood which brought her additional “concerns”.

This storyboard, the paper of which recalls the clandestine newspaper produced during her previous incarceration in Mardin, is thus an integral part of Zehra Doğan’s original work and serves as a document recording the acts of resistance by prisoners, the majority of which are Kurdish, in Turkish jails and, like all other prison productions elsewhere, illustrate women’s struggles. On this score, the exhibition held in Brescia (catalogue available in Italian) which will move this fall to the PAC Contemporary Art Pavilion in Milan is also an integral complement.

Multiform, artist Zehra Doğan, the Kurdish journalist and woman, tirelessly continues her work for women, for Kurdish emancipation, and and so nothing will be forgotten.

She considers Art that delves on the intimate as a weapon of massive denunciation.

And what a weapon! For those who have followed Zehra’s artistic path for the last 4 years, one can say she has built with her works an entire section of Kurdish contemporary Art and, beyond that, resistance art plain and simple, far from the empty gestures of Art with no grounding.

Hosting Zehra in an improvised workshop and watching her relentless work for ten days, seeing and filming hours of creation of large scale original works she was preparing end of July for an Italian exhibition in Milan organized by Prometeo Galery, put the finishing touches, if these were still required, to our belief in her strength as an artist, her huge talent and her determination to let her voice carry alongside others in the Art of resistance.

Exhibited in Europe and in the United States since 2016 with her “escaped works” or those of her “clandestine period”, supported by peers such as Banksy or Ai Weiwei while she was still in prison, Zehra Doğan now measures the recognition she finds in artistic circles without having to sell herself to the highest bidder nor having to disguise her struggle in favor of Kurdish women. With her head filled with projects, her nomadic agenda through Europe will lead her into many other meetings where she will hold forth on her feminist struggle, her humanism and her undying attachment to her Kurdish homelands.

Kedistan will always stand by her side to keep you informed, because of the ties of friendship between us and because mainstream media, notably in France, always look elsewhere.

This participation in the 11th Edition of the Berlin Biennial is thus the sign of many more to come, each time with surprises. To be continued… 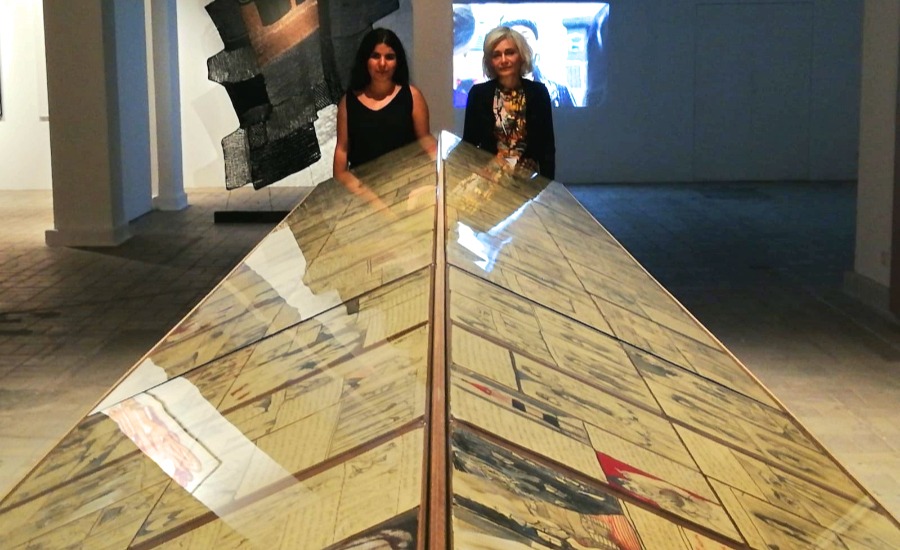