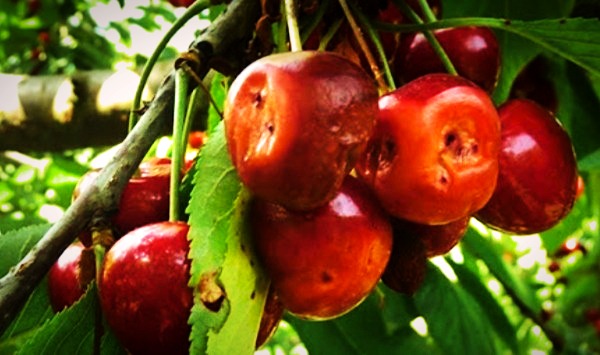 A ripe spring gave overripe, and even rotten fruit… Bring on summer.

Well, Ramadan is over and so are the holidays. The Reis offered his belated wishes in a speech. I notice he doesn’t miss a single opportunity to address himself to the Naaaation, even if he must steal the words from his ministers, those who are doing the work, but he has to be the one to say it personally. That’s what being Reis is all about.

In this latest speech in which he celebrates as usual “the success of Turkey which has become an example to the world when it comes to fighting the coronavirus”, he specifies that “we are convinced that a bright future awaits us, because during this period our Nation demonstrated its determination in avoiding all the traps laid out on its path, one after the other, in order to reach the objectives laid out for 2023.”

That famous 2023 is the centennial of the founding of the Turkish Republic on October 29 1923. But under the wrappings of 100 republican years, the Reis and his muscled ones are mostly focused on the date of the signature of the Lausanne Treaty, on July 24 1923 and, using the notion that the Treaty will no longer be viable beyond 100 years, titillate the crowds with the carrot of a “New Ottoman” empire.

“May 27 is the date on which the virus of the State coup entered Turkey for the first time,” said the Reis. Funny, I though that the virus was Armenian, Kurdish, or from some other minorities, or LGBT, unless it be women… I see the word “virus” is popular and gets used without moderation…

As for May 27th… You can take a look at the article “1960 Turkish coup d’état” on Wikipedia. If I summarize for you, it says “The 1960 military coup d’état in Turkey was organized on May 27 1960 by a group of Turkish army officers against the democratically elected government of the Democratic Party (…) President Celal Bayar, Prime Minister Adnan Menderes and a few other members of the government were arrested and judged by an irregular tribunal set up by the junta, on the island of Yassıada in the sea of Marmara. These politicians from the Democratic Party were accused of high treason, of misuse of public funds and of abrogating the constitution. (…) The trials concluded with the execution of Menderes, of the Foreign Affairs Minister Fatin Rüştü Zorlu and of the Finance Minister Hasan Polatkan on the island of Imralı on September 16 1961. President Celal Bayar was sentenced to life imprisonment. The military dissolved the Democratic Party, then accused of being an Islamist Party.”

Still on a roll, the Reis continued: “Unfortunately, from that date forward, we have been confronted by many attacks such as putschs, juntas, memorandums, proclamations or attempts at coups. Between clever footwork and attempts at coups, from attacks by terrorist organizations to the offence of economic manipulations, every means have been attempted but the great and powerful journey of our Turkey has never been stopped.”

“Menderes and his friends paid the price of the services rendered to our country and Nation, through heavy torture, humiliations, imprisonment and the march to the gallows.”

But Erdogan the First is confident: “The will and the courage that our Nation displayed on July 15 [during the 2016 attempted coup] is the sign that the days of juntas, putschs and trusteeships are over, inch’allah.”

He follows with the “Feast of the Conquest” which celebrated the capture of Constantinople by Otoman forces. He announces that during the week of celebrations organized by the Ministry of Culture and Tourism, prayers will be held in Santa Sophia, beginning tomorrow, May 29… God, such beautiful symbolism!

“From Mauritania to Bolivia, we did not abandon a single one of our citizens.” Then he underscores: “We managed to respond to 100 of the 135 countries that requested our aid or our products. Allah be thanked, with the support provided by our Nation, with our health services and other measures, we head the list of countries having come through the pandemic period with the least concerns.”

Indeed, along with “measures” unique in the world, while over here we were dying from a lack of masks and of tests, along with the 10 Turkish lira requested from the people, plus money collected from the taxpayer, several aids were sent here and there, for communication purposes… 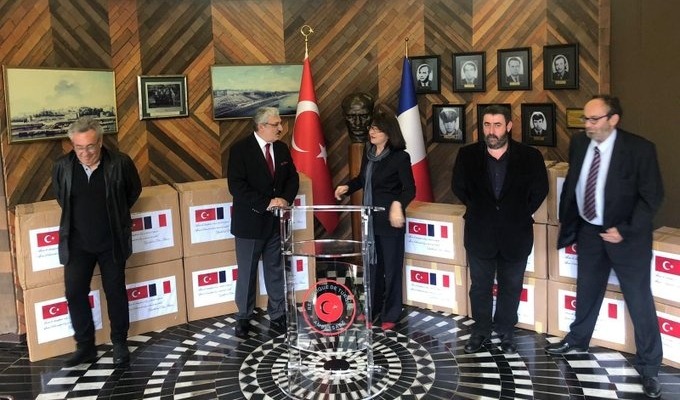 Operation “outstretched hand” of the great country that is Turkey, in its Paris Embassy.

For example, at the end of April, pro-AKP media informed that “after extending a hand” to Spain and Italy, Turkey had responded to a request from Nathalie Goulet, Senator in the French département of Orne who likes the Reis very much1Vice-president of the interparliamentary France-Turkey Friendship group in the French Senate, at the end of February 2012 she had praised the censoring by the Constitutional Council of the law tending to repress challenges to the existence of genocides recognized by law – including the Armenian genocide of 1915.Turkey sent 500 sanitary blouses and 20 000 masks.

The aid was handed over to Nathalie at the Turkish Embassy in Paris, precisely during the 10th anniversay of the Armenian Genocide, in the hall expressly decorated with portraits of Turkish diplomats assassinated (80′) by the Asala (Secret Armenian Army for the Liberation of Armenia).

Right in the kisser, a stinking communicopropaganda operation, as rotten as the fruit! 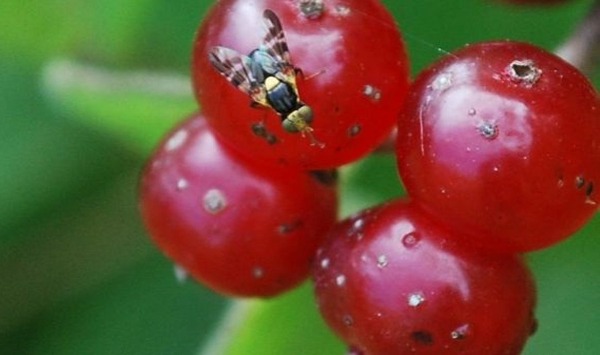 The cherry fly “Rhagoletis cerasi” attacks cherries exclusively : its white maggots gorge on the pulp of the fruit, rendering it unfit for human consumption.

In short, I spare you his usual language and innuendos, the Reis is announcing the return of trips, the re-opening of parks and gardens, cafés and restaurants along with the return of initiatives such as open air concerts, all of this underlined by the importance of “the people respecting sanitary rules.”

The fruit is spoiled… The summer promises to be rotten too.