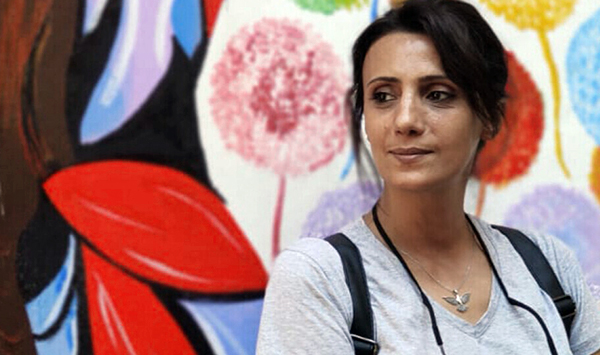 Kurdish author Meral Şimşek was expected in Oldenburg Germany for the regular Kurdish PEN congress, of which she is a member, and which is scheduled for this July 8,9 and 10th.

As would any other citizen of the Turkish Republic, Meral requested a visa from the external services of the German consulate.

Despite a complete file, accompanied by the official invitation, her visa request was refused by the consulate.

From the German PEN to which she turned for assistance, she received the following brief message:

Thank you for your message.After examining your documents and consulting our advisors, we regret to inform you that, for the time being, we are not in a position to provide you with any help in this specific matter, unfortunately.We are sorry and with our best greetings.”

Meral transmitted her reaction to Kedistan:

“Unfortunately, my wish to attend the Kurdish PEN congress, of which I am a member, and to participate in the elections of its administration, will not be possible because the German government has turned down my visa request, on the grounds of “article 13”. This article pertains to persons ‘susceptible of requesting asylum’.

As a practitioner of literature, I denounce this unjust attitude of Germany, a European country. Moreover, I am not the only one to receive such a denial, the requests of other participants were also refused. I must thus consider this attitude as a general political stance toward Kurds.

The following should also be noted: ‘the asylum risk’ is a recognition that these people are not safe in their country of citizenship, but are denied. With this attitude, the German government seems to be saying both ‘yes, it is a fact that Kurds are not safe in Turkey’ and at the same time ‘our great democracy has nothing against this fact’.”

The Kurdish author Meral Şimşek who has published novels, poetry and short stories, was recently honored by the German Theodor Kramer Prize. Meral Şimşek is hounded in Turkey as “belonging to a terrorist organization” and for “propaganda”. She is one of the many intellectual personalities thrown before the courts with the catch-all accusation of “terrorism”.

Her trial is ongoing. On July 5th of this year, during the hearing held in Edirne Ipsala, the prosecutor delivered a definitive opinion. The next hearing, probably with the verdict, is scheduled for July 18 2022 at 11h00..

Following Erdoğan’s blackmail concerning Sweden and Finland’s admission to NATO, and his threat of opposing a veto since he considers the Kurdish question as the cause of a controversy with the Nordic countries, these countries made allegiance to the Turkish regime and capitulated to his demands. On this occasion, the NATO members confirmed their visions concerning the designation as “terrorist” of the Kurdish movement and “Turkey’s legitimate right to defend itself”. Turkey submitted a list of extradition requests of militants, in support of its blackmail. No more was required for the European diplomatic antennas to harden their visa policy.

Moreover, this article 13 is contradictory as it is in total opposition precisely with a possibility of requesting asylum “in the country of origin” as  loudly suggested  as a “solution”by the entire European Right wing.

Germany, often held up as a model of welcoming has in reality no other migratory policy than one focused on labor recruitment and, as a reminder, is the one country, along with France, to have insisted the most on the rogue European agreement  – that of the “deal” concerning migrants, reached with Erdoğan.

A friend, yet another, will possibly pay the cost of this hypocritical European policy toward Turkey.

Meral’s Şimşek’s writing can be read on Kedistan, of whom she is a regular guest, by following this link.

“I would like to express my gratitude to Deniz Yücel, the German Minister of the Interior, the Senator for Culture of Berlin, the Maksim Gorki Theatre, LCB, and all institutions/organizations and individuals, especially Deniz Yücel, who helped me solve this question and finally be safe in Germany.“

Provisionally therefore, after the news of the refusal by the German diplomacy in Turkey has spread, and thanks to interventions on the spot in Berlin to describe the specific case of Meral Şimşek, we can only rejoice collectively at the positive result obtained for Meral .