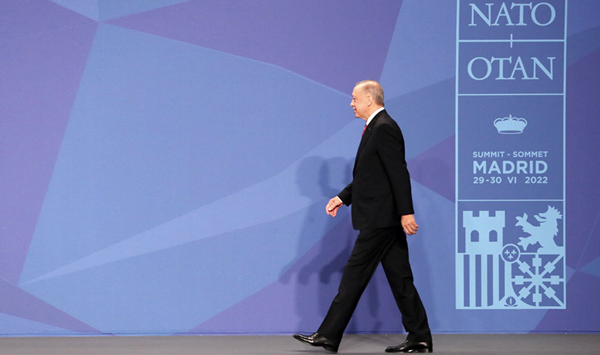 Erdoğan can crow because, at this NATO summit, he has just won a diplomatic victory that opens up new horizons for him.

In exchange for the lifting of his veto on Sweden and Finland joining the alliance, he obtained that the Westerners reiterate the holding of the Kurdistan Workers Party (PKK) as a terrorist entity and tarring the YPG and “other associated organizations” with the same brush, at least in the two Nordic countries, with ministerial declarations to that effect.

Even if these are only the terms of a memorandum signed on June 28th between Turkey, Sweden and Finland, in the wings of the NATO summit, a memorandum that also classifies the Fetullah Gülen organization under the label of terrorist, the very fact that NATO’s secretary general used the opportunity to reiterate a recognition of the legitimacy “of Turkey’s concerns over the export of weapons and the fight against terrorism”, is significant.

The document and the accompanying declarations speak of “showing solidarity with Turkey in the fight against terrorism in all its guises and of not imposing restrictions or embargos on defense industries.” These were the two conditions demanded by Turkey. This will rapidly translate into the acceptance of extradition demands formulated by Turkey and the prohibition of political activities by the Kurdish movement, notably for “fund raisers” on Swedish and Finnish territories. Turkey has already provided a number of extradition demands.

Noteworthy also is the fact all the press releases insist in noting that Turkey did not use the opportunity to formulate “any specific demand” directed toward the United States, despite the fact this introduces a contradiction with the listing as “terrorist” of Fetullah Gülen and his brotherhood, since the man is in exile in the USA, and the fact the YPGs were and remain the only trustworthy allies of the United States against ISIS in the region.

A “permanent mechanism” is included in the agreement to follow up on the commitments, and Turkey has made it known it would block the pursuit of the two Nordic countries’ joining NATO should it consider its demands were not being met in accordance with its wishes.

Thus, Erdoğan presents the end of his blackmail as a “victory” and a recognition. In fact, it is the acknowledgement of his nuisance value.

And what if the main issue were elsewhere?

Seeing at a NATO summit a legitimizing of the so-called “fight against terrorism” conducted by Turkey, when it is not hiding its intentions to seize by force, in violation of all agreements, another part of Northern Syria’s territory, calls in question the future political immobility of all NATO members, should Erdoğan carry out his plans. Under the excuse of a “buffer zone”, already a very old concept, and of taking a portion of the Syrian territory in order to “relocalize” the refugees it wishes to be rid of, Turkey seeks in fact to weaken and divide the Northern Syrian territory, a region it is already depriving of its water resources by holding them back. It also targets one of the main dams.  This is the pursuit of the project Westerners have already allowed in Afrin, which has since become a lair for jihadist factions and  apillaging zone, as well as one of terror against the populations who do not submit to it. Access to the essential road known as the M4 and its total control, in violation of past agreements, is also part of the plans, at a time when Turkey has shown itself unable to carry out this control   planned for in the agreements around Idlib, leaving jihadist factions use it and prosper for its benefit.

For the time being, only movements of jihadist groups affiliated with Turkey and aerial bombings by planes or drones are ongoing in the coveted region, but we know how the invasion and the seizing of Afrin began. France, among others, had underlined at the time “the legitimate right of Turkey to defend its security.” We are not far from achieving this during this NATO summit.

Thus, unity in supporting Ukraine would justify a territorial attack elsewhere, especially since Russia, at Bachar’s side, would not directly oppose a Turkish invasion either.

The representatives and parties in Northern Syria call for a “aerial exclusion zone” in order to protect the populations. They do so addressing both the Western allies of the coalition against ISIS and the Russian Federation.

But in the conditions caused by the war in Ukraine, this appeal is extremely contradictory. Considering a military cooperation in order to establish an exclusion zone between Russia and the United States against a NATO member country, Turkey, is certainly a way of pointing out all the aberrant aspects of the situation, but also something of the order of wishful thinking. It is also relying on unscrupulous “allies”, all of them old hands at Real Politik.

On the ground, only what is left of the American military forces are aware that this Turkish offensive may facilitate a major upsurge of ISIS forces, and had the opportunity to say so by the voice of its military, notably at the time of the attack against the Hassake prison.

France, embroiled in its refusal to repatriate women, children, but also terrorist criminals from its own country, criminals currently guarded by Northern Syrian authorities, clearly does not measure the danger involved, and pursues its policy of cooperation with Turkey, as a direct consequence of the European agreements on migrants.  One can’t see it playing the guardians of the skies, especially since its president is inclined toward friendliness with Turkey over the matter of Ukrainian grain.

It is hard to tell at the moment which of the cowardices of the Western world that will prove most beneficial for Turkey. But there can be no doubt of the way Putin and Russia could take advantage of the contradiction on this secondary front, even if its military forces are in no position to intervene massively.

Erdoğan’s will in satisfying his political and military appetites prior to next year’s elections could open a Pandora’s box, far from the Northern countries of Europe searching for NATO’s military “security”.

The populations of Northern Syria could see the threats grow heavier still, during this NATO summit, so laden with new treasons are the discussions with the Turkish regime, treasons added onto the already consummated abandon of the Kurds and their allies after they had fought ISIS.