Hasakah • ISIS and Turkey against Rojava 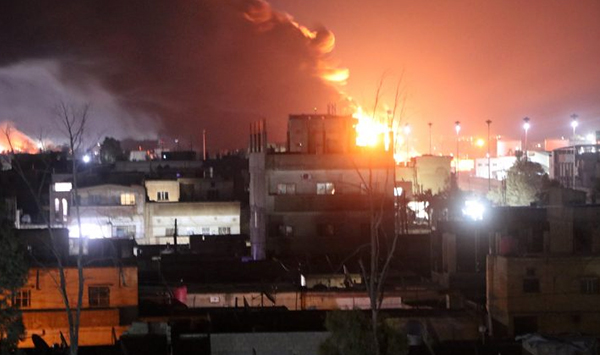 For the last few days, one of the most serious reappearances of ISIS terrorism has been occurring in Rojava in Hasakah (Northeastern Syria).

Joint ISIS ‘sleeper cells’ attacked the prison where several thousand ex-combatants of the Islamic State are detained, in order to facilitate a concerted escape.

Smaller attacks of this type occurred in the past months against the large Al Hol camp, also in the North East, where some 60 000 people – among them, 27 000 children – are held since the military defeat of the Islamic State. On each of these occasions, female ex-combatants of ISIS managed to escape in small numbers to join sleeper cells in the  region, or even in zones under Syrian or Turkish control since the so-called Astana process agreements. The camp itself has turned into a cesspool controlled by reconstituted gangs.

The Sina’a prison in Hasakah contains over 4 500 detainees from close to 50 different nationalities, mercenaries who came to fight by the side of ISIS and whose countries of origin still refuse to take on responsibility for repatriation and judgment.

As was the case in ex-Yugoslavia, institutions in Rojava once requested the constitution of an ad hoc tribunal to carry out the judgment on the main detainees responsible for crimes committed by the Islamic State, thus providing for all investigations on war crimes and the incrimination of the guilty. It was seen as a way to respond to the refusal by the States who consider that these crimes only concern the territories on which they were committed, Syria and Irak.

The same question applies concerning the thousands of children wallowing in the camps, orphans or under the pseudo-responsibility of their mothers who are often ex-combatants. Repatriations take place at a snail’s pace, leaving Rojava with the heavy administrative responsibility of providing security in the camps where gangs are reorganising. For Westerners, the blindfold remains firmly in place concerning the delayed-action terrorist bomb of absolute distress of children beset by daily violence.

Voices were even raised in Europe accusing the authorities maintaining security, guardianship and responsibility for the camps and prisons, of facilitating escapes, against finances, pushing back on Rojava all the the problems occurring with the reconstitution of Isis fighter cells on Syrian territory. Every excuse has been used to justify the inaction of “Western powers” concerning judgments and repatriations of Jihadists and their families, after the Kurdish forces in particular were abandoned to their fate, following the defeat of the Islamic State.

To this day, the Astana Process has established Syrian, Russian and Turkish control over different frontier zones – mainly with Turkey – as well as on communication hubs and main roads, but it has left Rojava’s autonomous administration with the heavy task of containing ex-combatant prisoners while tightening the limits of the autonomous territory and not returning to it other regions such as that of Afrin, left to the hands of gangs allied with the Turkish regime.

Thus, Rojava and all of Northern Syria are directly under threat from Turkey who does not spare drone bombing strikes against various localities, such as Kobanê recently, causing civilian deaths every time, many of them children. The aim being to destabilise the populations, accused by the Turkish regime of solidarity with the PYD, the Turkish regime’s pet hatred  which it calls ‘PKK terrorism”.

So there should be no surprise in the fact that drone strikes by Turkish forces have intensified in the four days since the fighting began against the ISIS attackers. Nor should we be surprised to learn that some of the escaped Jihadists have reached the zones controlled by Turkey’s allies.

To this day, the temporary toll consists of 22 dead among the FDS forces, 17 wounded, over and above the guards assassinated by the escapees. Fighting was ongoing on Sunday around the prison and in neighbouring areas, with final figures not yet established. Some unverified information concerns the death of a journalist. As for the hemorrage of fleeing Jihadists, it was forcefully stopped very quickly, if one judges by the images shared by various networks, but some of them had managed to grab weapons and the fighting was very violent. There is talk of over 175 dead on the ISIS side. 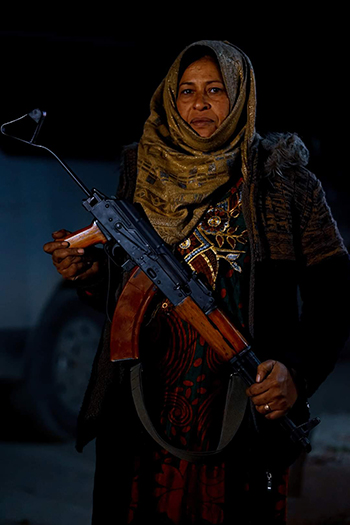 Kurdish woman patrolling the streets to insure security in the neighborhood. Photo by @Rudy_tahlo

The limited American forces still on the ground secured several points around Hasakah and were seen in the town itself. Information claiming that American forces would have authorised and facilitated the bombing of the rest of the ISIS besieged also requires verification and confirmation.

Outside of the facts, always difficult to verify despite multiple sources of information that are often contradictory, there remains the evidence that this is one of the biggest attempts at destabilising Rojava, by leaning on a weak spot, which is entirely the responsibility, once again, of the Western States that abandoned the matter of the Islamic State’s ex-combatants, just as that of providing support against the unceasing attacks from Turkey.

A curfew has been imposed by the Rojava forces. In Hasakah, photos published on Sunday night January 23rd, showed  Kurdish civilian women, patrolling the neighbourhoods, weapons in hand, to insure collective security.

While the Kurds were fighting against ISIS terrorism, many in Europe showed their interest, even their support. This support for Rojava has seen a thinning of its ranks over the years. Hollywood-type movies on Kurdish women fighters have been stashed away   in the cupboards.

Only progressist forces in Europe maintain their solidarity and among them, those who recognize in Rojava a libertarian alternative for eco-socialism and feminism.

May these forces bring back to the forefront the solidarity Rojava needs more than ever.

26-01-2022 / Update – The Peoples’ Hammer Operation has culminated with our entire control of the al-Sina’a prison in al-Hasaka and the surrendering of all Daesh terrorists.

We maintain the “Kedistan tool” as well as its archives. We are fiercely committed to it remaining free of charge, devoid of advertising and with ease of consultation for our readers, even if this has a financial costs, covered up till now by financial contributions (all the authors at Kedistan work on a volunteer basis). Support Kedistan, make a contribution.