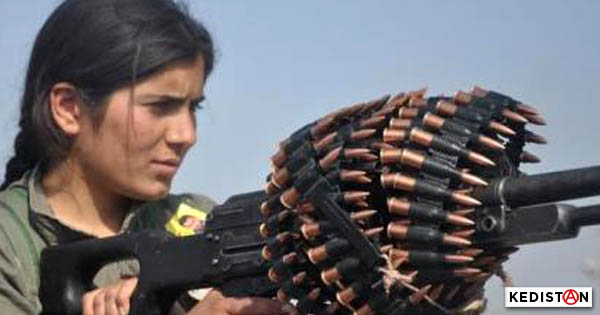 A young Kurdish woman called “Rehana” has garnered a great deal of media attention over the past few days, after reports emerged claiming that she had killed more than a hundred ISIL fighters – single-handedly. A picture of the smiling beauty, wearing combat gear and toting a rifle, is still making the rounds of social media. Even as Rehana’s circumstances remain uncorroborated, the overabundance of attention she has received raises several important questions. It adds to the plethora of reports out there glamorising the all-female Kurdish battalions taking on ISIL fighters, with little attention to the politics of these brave women. 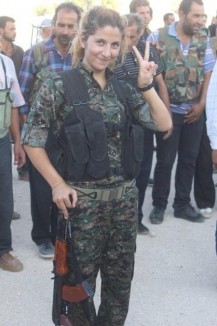 Preoccupied with attempts to sensationalise the ways in which these women defy preconceived notions of eastern women as oppressed victims, these mainstream caricaturisations erroneously present Kurdish women fighters as a novel phenomenon. They cheapen a legitimate struggle by projecting their bizarre orientalist fantasies on it – and oversimplify the reasons motivating Kurdish women to join the fight. Nowadays, it seems to be appealing to portray women as sympathetic enemies of ISIL without raising questions about their ideologies and political aims.

At the same time, critics have accused the Kurdish leadership of exploiting these women for PR purposes – in an attempt to win over western public opinion. While there may be an element of truth to such charges in some cases, those same critics fail to appreciate the different political cultures that exist among the Kurdish people as a whole, scattered across Syria, Iraq, Turkey, and Iran. They also ignore the fact that Kurdish women have been engaging in armed resistance for decades without anyone’s notice.

Typical of western media’s myopia, instead of considering the implications of women taking up arms in what is essentially a patriarchal society – especially against a group that rapes and sells women as sex-slaves – even fashion magazines appropriate the struggle of Kurdish women for their own sensationalist purposes. Reporters often pick the most “attractive” fighters for interviews and exoticise them as “badass” Amazons.

The truth is, no matter how fascinating it is – from an orientalist perspective – to discover a women’s revolution among Kurds, my generation grew up recognising women fighters as a natural element of our identity. Although there is still a long way to go, what some now ignorantly call “tokenism”, has in fact shaped the consciousness of millions of Kurds.
Currently, apart from the fight against ISIL and the Assad-regime in Syria, Kurdish women also struggle against regimes they consider oppressive, such as Turkey and Iran. There are many examples of women as warriors or leaders in Kurdish history.

For instance, in the late 19th century, Kara Fatma led a battalion of almost 700 men in the Ottoman Empire and managed to insert 43 women into the army ranks – very unusual for the period. In 1974, Leyla Qasim, at the age of 22, became the first woman to be executed by the Iraqi Baath party for her involvement in the Kurdish student movement.
Despite this legacy, it would be a stretch to call Kurdish society gender-equal, considering the prevalence of male-dominated rule and violence.

The People’s Defence Forces (YPG) in Syria and the Women’s Defence Units (YPJ) from Syrian Kurdistan have been fighting ISIL for two years and now lead an epic resistance in the northern Syrian town of Kobane. An estimated 35 percent – around 15,000 fighters – are women . Founded in 2013 as an autonomous women’s army, the YPJ conducts independent operations. There are several hundred women’s battalions across Syria’s Kurdistan region. Meysa Abdo is the woman commanding the resistance in Kobane and hundreds of women have died fighting ISIL.

Parallel to the existential fight against ISIL, women in the Syrian Kurdistan region, including Arabs, Assyrians, Turkmen, and Armenians, lead a social revolution against society’s patriarchal order through gender-egalitarian governance and a grassroots-feminist movement.

The YPG/YPJ fighters are closely linked to the Kurdistan Workers Party (PKK). This guerrilla organisation is one of the strongest forces against ISIL, but due to hostilities with Turkey, it is classified as a “terrorist organisation”.

Little known is the fact that almost half of the PKK ranks consist of women . The movement explicitly commits to women’s liberation and enforces quotas, as well as “co-presidency” on all levels – one woman and one man share the chair. These policies were adopted by the Syrian Kurdistan administration and Kurdish parties in Turkey and Iran.
Influenced by the PKK’s feminist stance, the majority of women in the Turkish parliament and municipal administrations are Kurdish. Together with the YPG/YPJ, PKK units were key to creating a safety corridor to rescue the Yazidis in the Sinjar Mountains in August. Some PKK women died defending Makhmour in Iraqi Kurdistan, alongside male Peshmerga fighters.

In Iraqi Kurdistan, several hundred make-up the all female battalion of the Peshmerga . Many of them complain that they are not deployed at the front. In the 1970s-80s, during the armed resistance against the regime of Saddam Hussein, Kurdish women took up arms alongside their husbands and even assumed noms de guerre .

Today, Iraqi Kurds enjoy a degree of autonomy and rights. Unlike the older generations, almost none of the women currently enlisted have actual combat experience and are often in charge of logistics instead. The feudal-patriarchal culture of the two dominant parties in northern Iraq is less permissible of women’s participation in war.

If there is a strong women’s movement among Kurds beyond the battlefield today, it has more to do with left-wing politics and the culture of resistance.
Those who see the Kurdish women’s fight as PR either treat all Kurdish parties as one homogeneous group or ignore the social revolution that preceded the armed struggle, which gave Kurdish women a reputation as important political actors and equal decision-makers. After all, Kurdish women have been fighting this cause with little media attention for decades.

In fact, the mass-mobilisation of women in Kobane is the legacy of decades-long resistance of Kurdish women as fighters, prisoners, politicians, leaders of popular uprisings and tireless protesters, unwilling to compromise on their rights.

Lastly, it does not help Kurdish women to be glorified as enemies of ISIL, if their entire political struggle is not supported. Western media’s white-washing of the Kurdish women’s resistance sanitises a radical struggle in such a way as to suit the perceptions of a western audience. Rather than challenging the awkward fact that the movement that the vast majority of women fighting ISIL belong to is labelled as a terrorist organisation – by Turkey, the EU, and the US – they conveniently leave it out.

Appreciation for these women should not only praise their fight against ISIL, but it should also recognise their politics. Those seeking to honour the bravest enemies of ISIL can begin by actively supporting the resistance in Kobane, remove the PKK from the terror list, and officially recognise the Syrian Kurdistan administration.

Dilar Dirik is a Kurdish activist and a PhD student at the University of Cambridge. Her research focus is Kurdistan and the Kurdish women’s movement.