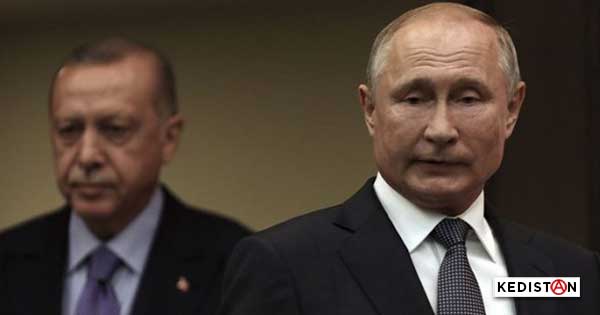 With all participants in the Syrian fools’ game competing for the Judas title, Putin has dealt the card for his own victory.

Following on four rounds of negotiations with Iran and Turkey, Russia has kept unflinchingly to the spirit it set out in May 2017 in Astana. That process set down control of the power plays between the armed forces on the ground, and the de facto shutting out of the “coalition” incapable of proposals or even of the will to propose anything. In this sense, Turkey’s presence in the process along with its undisputed participation in the NATO alliance, was considered as signifying the acquiescence of its other members. One should not forget that , in 2016, the UN’s Security Council had also applauded the Turko-Russian agreement that served as a prelude to Astana. Some of Europe’s Left-wingers also applauded.

Also in 2017, European countries wishing to end their military engagement against ISIS – one that had led to the sacrifice of close to 11 000 Kurdish fighters – began after Raqqa, then in the last fights in March 2019, to muddle through the impossible repatriation of their Jihadist nationals and their families. All of them were at odds with their public opinions. In this context, the announcement of the American withdrawal, almost a year ago, was interpreted as meant for domestic consumption.

In fact, it had already weighed as a threat over the Rojava project and had forced the democratic authorities in Rojava to open negotiations with the Syrian regime, something Russian diplomacy had been urging for over three years. Those “negotiations” already showed the mark of being held under constraint.

A few months ago, shortly before the announcement of a firm withdrawal of American forces, the decision to hold a UN sponsored commission responsible for conducting talks around a new Syrian constitution, was also a result of active Russian diplomacy. Need we remind the reader that the FDS and other Rojava representatives were excluded from this commission.

When mentioning Russian diplomacy, we must never forget that it rests on a strong military presence in Syria, supporting the regime, even if Russian forces were “whittled down” beginning of 2019.

The Astana agreement also provided for Russian control of the sky in the “de-escalation” zones covered in the process. Let’s be clear about this right away, this meant sole authorized flights by Russia, and thus, control of the reduction of the pockets of resistance to the regime, up until the final one, Idlib. Turkey was put in charge of controlling the Jihadist groups and this led to the situation we know now, which is to say a recycling of the mercenaries and gangs to its advantage, and pompously renaming them “National Syrian Army”. Russia did not stop the recapture of Afrin by Turkey, a Kurdish territory in Syria in which Turkey had already sheltered these same Jihadist groups at the start of 2018.

A fool’s game has been in place since 2016, one in which Putin’s Russia pulls the strings to its own advantage and that of the Syrian regime, with background support from Iran. Stating this is the same as barging through an open door. But given the political fascination Putin sometimes sets off in the most unexpected corners, it is worth repeating. Trump did nothing to counter these betrayals, adding his own to the lot and precipitating matters by giving the green light to what was already being concocted in the back rooms since the military end of ISIS.

No matter how preoccupied by its own public opinions, arms sales and international imbroglios provoked by Trump on all topics, not a single Western chancellery can say it did not see this coming. These same chancelleries knew perfectly well that the unilateralism initiated by the American President, and the diplomacy of counterforces of a Putin would lead to catastrophic consequences on the war scene in Syria. The hypocritical stance of maintaining the PKK on the list of terrorists while meeting with its members in an opportunistic way, was also at its own level, a signal of the ongoing betrayals occuring under Putin’s triumphant gaze.

For all that, one cannot consider that this constitutes a victory for the Bachar regime. Which never signed the Astana agreements while harvesting its fruits. The Russian geostrategical presence in the Middle-East vastly transcends the question of Bachar. Simply mentioning the word “gas” would lead to writing a whole chapter on the relationships between a Russian presence in Syria, European supplies of same, and Turkey. The sale of S400 is peanuts in comparison.

There is a telling anecdote, confirmed by a few video excerpts, on the meeting between Putin and Erdoğan. As the latter pulled out his fetichized map on the buffer zones in Syria, he was invited to put it away in front of the cameras…Without giving too much weight to this anecdote, it does provide grist for the mill concerning longer term ulterior motives.

Putin used Erdoğan just as he is using the current regime in Syria. His aims will never include allowing an increase in the power of the one or the other. A peace under Putin is a peace imposed by military troops on the ground, his own and those of the regime. And the next unfolding of events will demonstrate that the Jihadist presence in Syria, be it in Idlib – the current Afrin – will be a supplementary step in the war in 2020 where Turkey will be forced to abandon its pretentions at supporting the bearded ones it is using for the time being. As a trade-off, the Rojava project will probably be dismantled under occupation by the Syrian army except if, Putin here again decides to use their presence against the Jihadist threat, still present.

The decision taken yesterday by the FDS to resist and to refuse the points of agreement between Erdoğan and Putin will be difficult to maintain politically, especially since regime forces are being sent under Russian protection toward Northern Syria and the battle to conquer territory within the 30 km zone is ongoing by the Turkish forces, with more victims and displaced persons, exactions and averred war crimes. As demonstrated by the strong symbol of Serêkaniyê, this resistance shows, if there was still need to do so, that even if the political project in Rojava does not emerge unscathed from these past weeks and the ones to come, it has imprinted in the populations, the actors of the Rojava process and women in particular, a will to maintain the democratic acquisitions and the values of communal living. No matter what the humanitarian crisis may be as a consequence of the war, the memory of how this territory knew peace in a ocean of conflicts will live on and feed the resistance.

When the one charged by all with dealing the cards uses his own tricked pack, in the name of peace around the table, the loser is the one who does not cheat.

This fourth article closes an attempt to clarify the roles played by various international actors. This exercise is not inspired by a wish to play the “specialist”. There are enough of those spreading out these days across the news channels, each one with a “book” to peddle or an Ego to reinforce. I am not back from Raqqa where I would supposedly “have fought with the peshmergas” (sic). Nor does Kedistan have a secular Hollywood-type film to promote.

I owe to our friends the internationalist fighters this attempt to share more widely what I have understood myself of the Syrian muck-up, modestly and from where I happen to be. In order to go as far as the facts allow, in the hope that their internationalist struggle will not be dragged through the mud and “litigated” by the States.

Defending Rojava today, demonstrating with placards reading “Erdoğan murderer”, denouncing war crimes are not simply activist or humanist duties, even if the “filmed” war crimes make you want to vomit.

What is occurring historically in Rojava, at a time when the world is rising up in flames against capitalist liberalism and the planet burns under its depredations, is an attempt to crush a democratic solution – always open to criticism but oh so useful for all of humanity, just as was that of a certain Spanish revolution crushed in 1936.

To speak in the most concrete of terms, I can only encourage those who denounce war crimes unceasingly and who answer the urgent calls from the populations. If this column served no other purpose, it would have proven useful.