In Syria, each of the killers shows his hand against Rojava #1 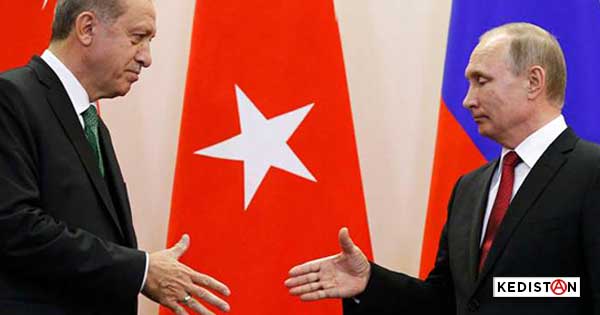 Syria.  Some were already applauding Putin, even prior to listening to or reading statements by commanders of the FDS regarding a sought-after agreement for an intervention by the Syrian regime’s troops, in a situation where, as they say “we must choose between the People and its genocide.“

Let us recall that the Syrian army was called in back in 2018 at Menbij, after the first announcement of “an American withdrawal”. The same thing happened for the invasion and occupation in Afrin, with no prior announcement, where the Kurdish movement  opted for a partial evacuation of the town which  the Turkish regime then turned over to the  violent acts of its constant allies, the bearded Jihadists.

Nothing is played out yet. It should be noted that control of the air space, easily achievable either by the coalition or by the Russian partner, was never   considered. Such a control would no doubt annul the chances of a blackmail against the FDS and Rojava, concerning their future autonomy in the context of the Syrian morass. Whereas the introduction of the Syrian army holds that potential for blackmail.

Moreover, the Turkish military presence is already a fact around Idleb, through the tri-party agreement between Turkey, Iran and Russia, without this representing a casus belli with the regime’s troops despite their regular assaults and bombings against this pocket. One can imagine another small step toward a peace brokered by Russia on the basis of such frontier agreements. A step following the political weakening of the FDS, to the background of the exodus of over 120 000 people within a few days. The threat from ISIS also being a matter for concern.

But enough suppositions, let’s get back to this blood-filled week and what we learn from the attitudes and positions taken at the international level, when it comes to fighting against a political project of confederalism and democracy, presently underway in the Middle-East.

As a starter, let’s consider the aspect of military agreements and alliances as pertains to Turkey’s membership in NATO. This was disposed of publicly through meetings followed by public declarations. Turkey gets a green light, slightly tinged with orange, but if one were to interpret the recent statements by NATO leaders tongue-in-cheek, one could say they advised the Turkish regime to use weapons such as those sold by France, supposedly capable of avoiding civilians, like in Yemen…These conclusions also put to rest the Pentagon’s hesitations and were followed by the announcement of a possible rapid withdrawal from the region of some one thousand American soldiers. Thus, the Good Soldier Trump sees his statements put into action and his Pontius Pilates-type withdrawal approved by the alliance. Each one will then proceed to requalify this hypocrisy as an international de-escalation, straying close to the name the Turkish regime has chosen for its aggression: “Sources of Peace.”

NATO, whom everyone thought was in crisis, by its unilateral alignment with Trump the populist, thus plays an important role in maintaining  the status quo with neither qualms nor moral reservations; “washing” one of its members clean of shed blood that might have besmirched all the others. Both the dead and the wounded in Rojava will surely appreciate.

European governments may hold as many Defence Councils meetings as they like, and communicate their conclusions, nonetheless said coalition in Syria has its source in NATO’s miliatry system. And that system, ever since its implementation, has existed in order to defend the interests of States currently part of a world-wide system. Rojava “its bared breast exposed to the Turkish knife”  is indeed very tiny when facing all the interests allied against it.

Only mentioning France for example, which I know well, I note the decision to cease delivering weapons to Turkey, following similar decisions by other European States. I then raise a simple question. Are the collaborations via Thales and Safran concerning military research and future sales also part of this decision? Because the villainous agreement concerning migrants is not the only one linking European States.

Some readers probably expect here a song and dance concerning murderous and cunning capitalism, written with a knife between the teeth. But all it takes is a quick search in order to list all the collaborations with the Turkish regime since the beginning of 2000 for instance, collaborations in which both the corrupt regime as well as European banks and industrial firms  gorge themselves, through open or limited partnerships. Economic liberalism translates into political cowardice, also known as “compromise in order to move forward”. The empty agitation of European leaders faced with the Turkish invasion is yet another act in the current Munich in which financial interests have priority over the global nuisances of regimes euphemistically called “powerful”. 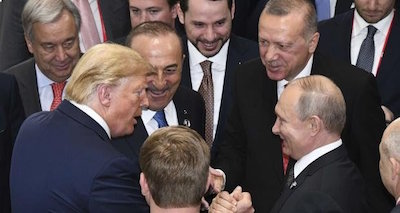 Confronted by the legitimate emotion provoked by this intervention, one must force oneself to maintain a certain distance in order to understand, beyond the feeling of powerlessness and the surge of indignation. And, bombarded with images of horror on video and by cynicism spread by tweets, the temptation is strong to stop thinking, or to do so in binary mode.

I will return to the events and facts of these past few days in a second article, along with the emotional charge and the mobilizations they provoked a bit all over. Luckily, these help to regain some trust in humanity, and give meaning to the transnational political struggle.

In an earlier column, I asked myself about the meaning of the Russian maintaining a position seemingly in ambush and Putin’s apparent non-involvement, similar to that of all the others. As mentioned in the introduction, the answer came to light today. The regime seems to consider that there’s no need to take too close a look at the Turkish penetration, and that the disorganization of Rojava along with its betrayal by all, puts it in a position of weakness forcing it to call on Syria itself. This is now a done deal and the Turkish regime is now one jaw in the vise, the other provided by Bachar’s regime, as both pursue their separate interests. One shouldn’t be too surprised to hear talk of bombings on Idleb again, this time as a thanks to Turkey.

These last twenty days have forced more changes in the Syrian question than all of the past year, in the direction Russian diplomacy wants to see enacted in the region. Russian support for a UN initiative of a commission responsible for drawing out a Syrian constitution resulting for these war years, now takes on its full meaning. Especially since the Northern part of Syria, now bound hand and foot would be forced to accept all withdrawals imposed on it, should it even be admitted as as partner to the talks.

“Genocidal war or the survival of the Peoples”  may lead to terribly constricting setbacks in an already badly damaged confederalist project. The physical liquidation, probably in a targeted operation, of co-President Hevrin Khalaf who was in France recently pleading for the Kurdish cause, takes on its full meaning in the midst of all the betrayals of the Kurds currently taking place, and the huge humanitarian pressure resulting from it.

Although the political game plans of one and the other may find themselves blocked by a grain of sand, and even though polical cowardice often turns against its authors (Middle Eastern history is chock full of such instances), a scenario presented as ” a way out of the crisis” is taking shape before our eyes, while the massacres play out live, as do the betrayals and their justifications.

The only concern among the States being the possible re-emergence of ISIS and the fertile soil provided for it by the American withdrawal. The escape of a certain number of Jihadists and of their families, even though it was part of the risks, played out before the eyes of the entire world. There again, we know the Syrian regime cannot handle this question and that it will be used as an element of blackmail according to various interests, and as a demonstration that the Kurds can’t handle the problem, thus obliterating the memory of the thousands who died fighting against this murderous Islamism, purveyor of obscurantism.

Racist Turkish nationalism, galvanized internally by each additional phase of war, has united yesterday’s electoral competitors, against the enemy without and within. Kemalist rethoric is at work, even inside religious schools, with veiled young girls forming the Turkish flag in the school yards and praying for the soldier fighting for the country.  The circle is complete and a certain Reis finds comfort even in his opponents,  for the sake of Turkicity.

“Source of Peace”, in the school yard of a religious school for girls (image drawn from a video)

There has been no dearth of arrests, and the rare courageous opponents are dragged through the mud, as is the case for the human rights defender Eren Keskin, among others.

The dust will have to settle somewhat before we can make sense of the about-turns in American policies and ongoing  quarrels.  But Trump’s populism will have found its followers on the international scene, among identitarian parties, against the Kurdish movement.  The various Pontius Pilates, partisans of a withdrawal behind borders are speaking up also and they are now for Bachar’s Peace against the Kurds and Erdogan the Islamist. Fascism is never far behind identitarian national populism. Mobilizing to support Rojava is also an anti-fascistic struggle, obviously.

The coming days will see their lot of exactions committed by Turkish forces and their Jihadist allies, and more killings like those that occurred yesterday against bearers of peace, in order to terrorize populations. The FDS’ resistance, and among them that of international volunteers still at their side, is suspended to new betrayals. The expression of transnational solidarity will not be enough to counteract the huge despair that translates into anger, and henceforth, a general resentment, not conducive to a political debate about the future. That was also the purpose of the Turkish assault.

A the journalistic front, “Western correspondents” have begun their own withdrawal from Rojava and from the internal disorganization caused by Turkey and the “regime”s arrival. “If these informations can be verified, the Rojava we wrote about may be living its final political moments”, according to correspondents who are not  in the habit of relaying the usual Turkish propaganda. This changes nothing to the confusion nor to the will demonstrated by all to reconquer positions, future sources of more confrontations.