Call to concrete support for Rojava 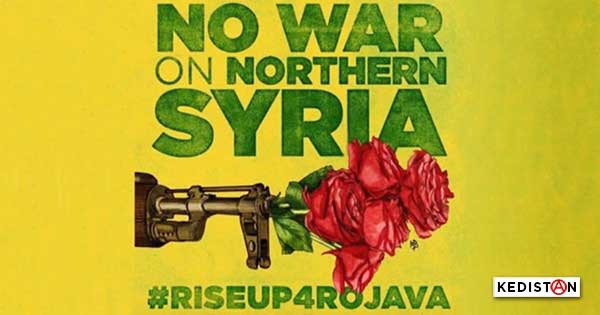 We are publishing this call to concrete support for Rojava. No matter how the situation maye volve, there are huge needs in Rojava.
The appeal is launched via la librairie Les Nuits Bleues, Angers, France.

NO TO TURKISH DICTATORSHIP!! STOP THE BOMBINGS!
WITHDRAWAL OF FUNDAMENTALIST BACK-UP TROOPS AT TURKEY’S SERVICE!
UNCONDITIONAL WITHDRAWAL FROM ROJAVA!!

The “Sources of Peace” operation is a source of war!

As soon as American troops withdrew from Syria on October 9th, the Turkish State and the National Syrian Army (an armed militia made up for the most part of Islamist Jihadists) launched a military campaign called operation “Source of Peace” against Rojava and its democratic federal system in Northern Syria.

This attack in the name of “peace” and of the “fight against terrorism” revives the war in a region that has already been overly subjected to it since 2011. Yet Turkey is the one whose obsessive and brutal opposition to the freedom of Kurdistan compromises this peace and acts as a terrorist!

Is this surprising? No, unfortunately. The regime of Erdoğan, Turkey’s Reis, has always been a supporter of various islamist forces, providing for their care in hospitals within the Turkish border, buying their oil and arming the “bearded ones”: Jaysh al-Islam, Ahrar-Sham, Ahrar al-Sharqiya and the Sultan Murad division in particular.

There is unanimous international condemnation of the Turkish aggression.

But that is not enough.

The populations under attack are those who fought against the Islamic State and who won the decisive battles against it during the war: Kobané, Sinjar, Raqqa.

Let us simply remember the 11 000 Kurdish and FDS fighters who died battling ISIS or the groups linked to Al-Qaïda; the close to 25 000 wounded in the fierce battles for Freedom in Kurdistan, but also in the Sinjar in order to protect the Yezidis who were the victims of the beginning of a genocide in Syria.

It took a long time for Westerners to decide to support these forces (instead of the Free Syrian Army, the content and existence of which was more and more vague). Now that Westerners no longer need the democratic forces led by the Kurds, that support has disappeared.

The West used Rojava, then betrayed it. It left Rojava alone to face its enemies. Whether implicitely or explicitely, this is also an acceptance of the reappearance of Isis’ religious fanaticism!

Rojava’s federal model, democratic confederalism, is an attempt at an alternative and intelligent solution in a region worn down by struggles and wars; struggles instrumentalized by nationalisms and/or religions for over a century.

The treason perpetrated by the Sates does not leave this project a single chance. Once again, a nationalist force advances for its sole interests, to the detriment of all.

Despite its difficulties and its limitations, the experience of democratic confederalism in the midst of the Syrian chaos, provides hope for an entire region. The development of multi-confessionalism, respect of national autonomies, the building of an economy from the ground up with the creation of numerous production cooperatives, advances in the rights for women, render its existence intolrable for Erdogan the autocrat.

We cannot remain indifferent to the fate of populations living on this territory, nor to that of the fighters in the People’s Protection Units (YPG/YPJ) and the FDS (Kurds, Arabs, Turkmens, Syriacs, Armenians, Yezidis…) in general.

The count of victims could climb into the thousands, and the risks of kidnapping, extorsions, rapes and massacres are there. During the invasion of Afrin last year, again by Turkey with its ‘Olive Branch” operation, thousands of people were killed or disappeared. The testimonials recorded on videos show the infamy that was perpetrated!

The time should finally come to leave the Middle-East free to choose its own destiny. But how could world powers let a region so rich in resources (water, oil) and so strategically located free to enjoy its freedom? The region will know neither peace nor stability as long as capitalist States will play out their games of influence there. The Middle-East must be returned to its peoples!

At our level, we must exert pressure on the various governments so that they stop immediately the Turkish expansionism and invasion; our governments must end the hypocrisy and stop supporting dictatorial forces; the PKK must be removed from the lists of terrorist organizations. Export of weapons must cease, whether directly, indirectly or via cooperation (Thales) with dictatorships, specifically, with Turkey.

Not everyone can take arms to fight with our brothers and sisters in Rojava, but everyone can make a gesture at his or her own level.

Financial support is needed NOW, IMMEDIATELY for Kurdish and internationalist comrades fighting against ISIS and Turkey; who are fighting for Emancipation, Peace, Freedom and Equality for all.

Defending Northeastern Syria against the invasion by the Turkish army and its Jihadist affiliates does not only consist in defending life and peace. It is also a choice as to the kind of world in which we live.