The Trump Card • Five days to finish off a treason #3 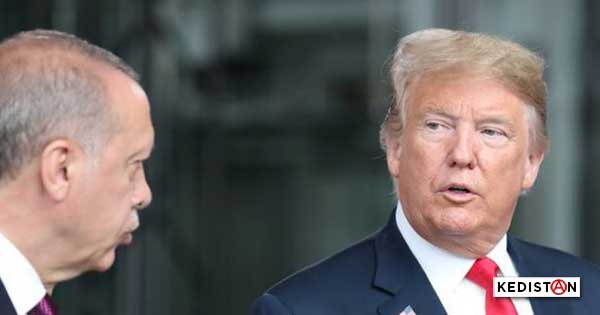 The agreement reached between Erdoğan and Trump, via the American Vice-President is one more treason achieved in total international illegality.

An American emissary reaches an agreement with the Turkish regime allowing the occupation of a territory 450 km long by 30 km wide in Syria, under the guise of a cease-fire binding for the Syrian Democratic Forces. Visibly, this doesn’t seem to bother too many people.

Thus, with his unilateral interventions, Trump demonstrates his ability to so-call ‘solve’ international problems while being able to repatriate his “Boys”. His electoral base, which doesn’t give a hoot about the international scene, will find reason in this to celebrate its champion’s efficiency. Indeed, the political maneuver is more efficient that the circonvolutions with Northern Syria and the arm-wrestling with Iran.

This international policy based on tweets and declarations more populist and demagogical the one than the other would be laughable, if it did not create constraints that will go on producing purulent wounds for decades.

Let’s move over quickly those declarations where Trump calls the “SDF worse than ISIS”, his letter where he tells Erdoğan not to “play the tough guy”, and finally, the phony sanctions that are lifted in exchange for the cease-fire.

Accepting that the second world economic power openly delegate to a regional power the task of occupying a terriroty by force, supposedly in order to protect its frontier, would constitute a major degeneration of an international institution such as the UN, justifying by the same token the same powerlessness in stopping the Israeli occupation, also validated by the United States authorities. “Might makes right”, validated by Master Trump?

The cease-fire for a few days, decided against Rojava, will allow the handling of urgent humanitarian needs. It will also allow the SDF fighters to reorganize. It will add more refugees on the roads. It opens the door wide to any number of arrangements between Turkey and the Syrian regime. These arrangements will probably be determined during the scheduled meeting between Putin and Erdoğan.

Those who might possibly see in this an honorable exit out of the ‘Syrian conflict’ would be seriously underplaying three things:

We would thus be heading for a negotiated agreement on zones of influence and military occupation, in which Kobanê, for instance, would fall under the Syrian or Turkish regime.

The demand addressed to the SDF to “move back” and leave the territory in order to send in the refugees eat sand and pebbles under strict surveillance, is included in the Turko-Amerian agreement, and would deprive the populations in the towns of the economic zones required for survival.

And yet, this cease-fire is the result of transnational support and mobilization, and of the fighting resistance of the SDF. A Trump has managed to turn these to his advantage in order to realize a project for shared occupation of Northern Syria, and to satisfy his domestic electoral base. Reason for which he insists on “bringing home the troops”.

You would have to be clever indeed to know exactly what will come out of the meeting between Erdoğan and Putin.

In all logic, the Russian master is the major winner in terms of strategic influence over the region.

One cannot really imagine the Syrian army moving out of the so-called buffer zone where it is at the moment, like in Kobanê, just as it is inconceivable that a Putin would be content with giving Turkey’s Dijahidst allies a role with Idlib as a rear base.

As in all previous agreements, the Syrian regime will probably not be a party to it.

Of course, in all logic, the SDF have limited this cease-fire to the combat zones and demand negociations while refusing the fait accompli.Who will listen to them?

A cease-fire can only be favorably received for our friends in Rojava.

But to stay with the applause and begin to accept this emerging war plan would once again, resemble a certain Munich. Only blood and tears will flow from the “Source of Peace”.

One last point: In a press release the Autonomous Administration mentions that the agreement “guarantees the return of all those who were displaced by the attack” which directly contradicts Turkish aspirations to an ethnic cleansing in the region. This decision would also stop any further invasion of Syrian territories by the Turkish State.