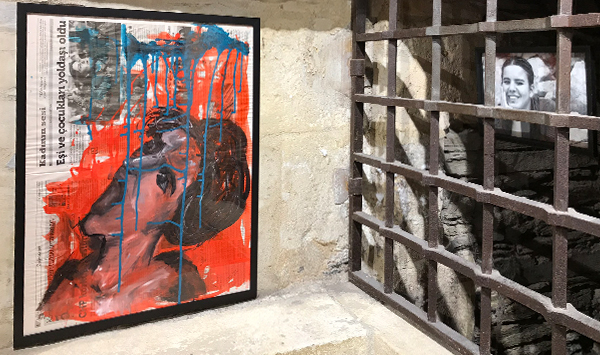 Following a petition addressed to the European Court of Human Rights (ECHR) which had examined a file brought to its attention, the Turkish government has acknowledged that journalist Zehra Doğan’s presumption of innocence had been violated and said it would pay her an indemnity in the amount of 1 350€.

The matter – brought before the ECHR at the request of journalist and artist Zehra Doğan’s lawyers – was decided on March 17 2022  in a petition calling on Turkey to pay an indemnity. In this case, the Turkish State admitted that, individuals sentenced for “propaganda for a terrorist organization” could not be described as  “terrorists” or as “members of an illegal organization”, as such, if that charge had been dropped in the proceedings, and that penitentiary administrations and judges executing the sentences,  by following the opposite tack, followed practices “violating the presumption of innocence.”

This is a legal argument based on plain logic as well as on the principle of the individualization of sentences.

This touches on an extremely common problem inside Turkish prisons. And most of the judgments devoid of evidence for such, “evoking” the belonging to an “organization” and thus, “terrorism” according to the Turkish State, lead to imprisonments in security cell blocks, with no possibility of benefiting of the right of transfer to a more “open” prison.

In 2015-2016, Zehra Doğan, one of the founders and editors of the feminist press Agency JINHA covered events in a Nusaybin under curfew. The agency was banned and shut down by a Law-decree at the end of October 2016. As for Zehra, she was arrested on July 23 2016, put on trial, condemned and imprisoned for “propaganda”. She was liberated on February 24 2019 from the women’s high security prison of Tarsus, having completed her sentence of close to 2 years, 9 months and 22 days.

However, during the period of Zehra Doğan’s imprisonment, her rights such as that of “transfer to an open prison” were blocked under various pretences. Zehra Doğan was asked to submit a written request indicating that “she had left the illegal organization, and was therefore no longer a member” and that “she wished to leave the block of political prisoners”. Which amounts to asking someone who is not a member of any organization whatsoever to “leave the organization” of which she is not a member, in order to exercise her rights. Her lawyer Olguner Olgun solicited the ECHR on this basis, while underlining that these generalized practices in Turkish prisons, amount to violations of the presumption of innocence.

The ECHR conveyed the recognition of this violation of rights to the government of the Republic of Turkey. In a “unilateral declaration”, the government requested the lifting of the petition while announcing it admitted the violation of the presumption of innocence, and that an amount of  1 350€ would be paid to Zehra Doğan as an indemnity. The journalist’s lawyers commented on the modest amount of the indemnity. Zehra and her lawyers also underlined the fact that “it would be more efficient for the Court to reach a decision resolving the systematic violations to the European Convention of human rights in Turkey”.

For its part, the ECHR unanimously resolved that since the Turkish government had acknowledge the “violation”, there was no need to examine the petition any further, although it did declare that “the indemnity offered by the government  for the violation of rights detailed in the Convention was not sufficient“.

According to lawyer Olguner Olgun, although the government thus avoided the establishment of constraining jurisprudence, nonetheless, the ECHR decision constitutes a guide for penitentiary administrations and judiciary authorities in similar situations. “We would have preferred that a decision be reached by the ECHR that would have fundamentally changed restrictive and illegal practices from all judiciary authorities, requiring perhaps legal arrangements.” He insisted: “This case is not an isolated or unique problem, in the regime of executions of sentences, but a systematic and structural illegality, applied in a general way across prisons. But by accepting and notifying through a “unilateral declaration” that the presumption of innocence had been violated and announcing the payment of an indemnity, the government forestalled the possibility a technically constraining jurisprudence might result from a judgement. However, we still think that the   declaration of acceptance of the government as well as the ECHR decision on this basis, will serve as guides for penitentiary administrations and judiciary authorities, in similar situations.”

Appeals to the ECHR whose judgements are compelling for members of the Council of Europe – of which Turkey is one – are constantly sidestepped by the regime using legal quibbling to do so, as is the case here by forestalling the finalization of the judgement in order to avoid its influence on jurisprudence. In other cases, when there is a petition for a liberation, Turkey does not comply, arguing that other accusations are still pending, as is the case for Selahattin Demirtaş.

For example, retroactively, Zehra Doğan’s case could apply in the Özgür Gündem case, still ongoing, and in which the accused have seen their files split off into separate accusations, during hearings and trials, as is the case for Aslı Erdoğan. None of the imprisonments in gaols of sinister reputation have been avoided.

A façade of Law is thus put forward in the worst of autocraties, who always insist on presenting a “democratic” face over their ruins of permanent injustice.

Photo: a snapshot taken at the Zehra Doğan exhibition in Angers, January 2018.