The Özgür Gündem newspaper trial • Aslı, Eren and the others… 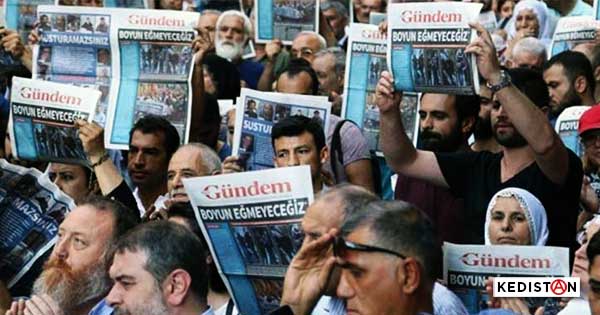 An nth trial for the Özgür Gündem newspaper on this February 14 2020: on the benches of the accused: novelist Aslı Erdoğan, linguist Necmiye Alpay, jurist Eren Keskin and the administrator at the time, Kemal, Sancılı along with nine other journalists…

On July 25 2015, after the cessation of the “resolution process” in the talks seeking a peaceful solution to the “Kurdish question” in Turkey, there followed a long period of confrontations. From the outset, a number of media and press organs were censored. In order to support them a solidarity campaign was launched. Titled “Become Chief Editor at the Özgür Gündem for a day”, this campaign received the support of 100 journalists, artists, writers, academics, politicians and heads of civilian organizations. It lasted until August 7 2016.

Inquests were opened targeting 50 of the 100 personalities who had expressed their solidarity; one after the other, they were accused of “propaganda for a terrorist organiazation” and “belonging to a terrorist organization”… 11 of these inquests were dropped, but 38 of the files moved on to trial.

28 “Chief Editors” before the courts

Deniz Türkali’s file was not included, since the inquest delays had run out.

Prison sentences inflicted on Murat Çelikkan, Ayşe Düzkan, Ragıp Duran and Celalettin Can were not carried out, on the basis of the principle calling for the postponement for the declaration of a verdict (Hükmün Açıklanmasının Ertelemesi – HAGB). Murat Çelikkan was liberated on parole following three months in jail.

On June 20 2016, Şebnem Korur Fincancı, Ahmet Nesin and Erol Önderoğlu were arrested then liberated following ten days of incarceration. Three more people were acquitted only on July 17 2019. After four and a half months in jail, Ayşe Düzkan was liberated on June 12 2019.

On August 16 2016, following the decision to prohibit and close down Özgür Gündem, the special police raided the newspaper’s offices, taking into custody 24 journalists, those of the newspaper but also journalists from IMC TV and DIHA who were covering the event. These media were also prohibited and shut down a few weeks later.

This operation was followed by raids on the homes of Eren Keskin, a jurist and former Editor in Chief at Özgür Gündem, a writer from the newspaper Filiz Koçali and journalist Ragıp Zarakolu.

Then on August 22 2016, Editor in Chief İnan Kızılkaya and publisher Zana Kaya were arrested. As one of the advisors, Asli Erdogan was arrested on August 19 2016, incarcerated 135 days, then liberated on December 29 2016 following an international campaign of support. Necmiye Alpay, imprisoned on August 31 2016 was liberated on the same day.

This did not stop the trial from proceeding.

The prosecutor dropped the accusation against all of the accused in this trial of “attempts against State integrity and order in the country”, because “no elements were found to justify this crime”. Thus “aggravated perpetuity” also known as “incompressible perpetuity” no longer figures among the required sentences.

As a reminder, this specific sentence is a substitute for capital punishment which was abolished in Turkey in 2002. But with this sentence, the condemned cannot obtain any remission on duration of the incarceration, as can occur with “normal” perpetuity.

“No sufficient and convincing evidence having been found”, the prosecutor called for the acquital of Necmiye Alpay and Bilge Oykut. The newspaper’s administrator at the time, Kemal Sancılı and İnan Kızılkaya are still accused of “belonging” and Bilir Kaya of “propaganda”. The prosecutor also called for the separation of the files concerning Ragıp Zarakolu and Filiz Koçali who are abroad and “could not be interrogated.”

Against Aslı Erdoğan, accused of “propaganda” for the 4 articles published in Özgür Gündem, the prosecutor calls for a sentence of one year and 10 months to 9 years and three months in jail. As for Eren Keskin, THE great lady of human rights defense in Turkey (a respectful salutation to her on this occasion)…She is at risk of a prison sentence of 7 years and 6 months to 17 years for “belonging to a terrorist orgnization”, since she would have “allowed publications favoring the organization”. Seventeen years more or less for Eren is nothing, considering the number of cases pending against her with sentences running to scores of years and fines in amounts impossible to settle. Nor is she the kind of person to give up. Responding to the prosecutor at the previous hearing, she said “I am described in the accusation as a member of a terrorist and armed organization. This indictment is contrary to the internal Law of Turkey. You see us as enemies. For 30 years, I have defended human rights. I have been a lawyer for 30 years, But you claim that I am a member of an armed terrorist organization. This is something…do you even believe this yourself? I will prepare my defense accordingly. I request a delay.”

The hearing was postponed to February 14 2020, meaning, tomorrow.

Aslı Erdoğan has just been acquitted of the charges of “membership in a terrorist organization” and “undermining the unity and integrity of the State”. She has also been acquitted from the charge of “propaganda for a terrorist organization” due to the statute of limitations. Bilge Oykut and Necmiye Alpay were also acquitted. The files of Zana Bilir, Inan Kızılkaya, Eren Keskin and Kemal Sancılı were dissociated into a separate case and will be covered at a new hearing. Their ordeal is therefore not over and, as Aslı’s lawyer said “the trials themselves become a sentence in their own right”.

A big thank you to all those who supported Aslı and, through her person, all of the other political hostages. International solidarity is more necessary than ever!

Express your support
For Aslı Erdoğan, Eren Keskin,
But also for all of the accused in this Kafkaesque trial.
Sign the petition!

“Another petition, what for?” you may say…
Know that the ones concerned find new resources to stand tall,
thanks to our support, even from afar.