JİNHA, DİHA and 13 medias shut down. Resistance and Support! 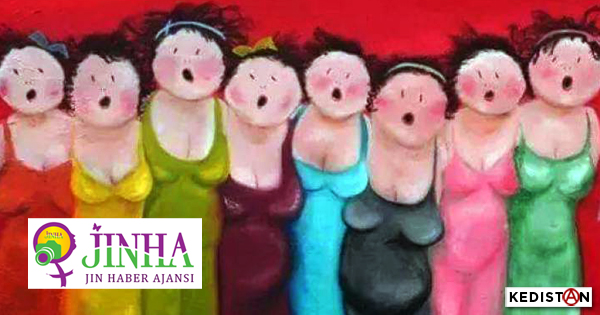 By decrees n° 675 and 676 promulgated on October 29 2016 in light of the state of emergency enforced since the attempted coup d’état on July 15, the Turkish government closed down 2 news agencies, JİNHA and DİHA. In all, 10 newspapers and 3 magazines were shut down.

According to Bianet’s “Media Observation Report” for the period of July, August, and September, 107 journalists and 10 distributors were jailed. 78 correspondents were arrested, and in the context of the state of emergency, 775 press cards and 49 passeports were suppressed. Close to 2500 journalists and staff from shut-down medias have lost their jobs.

DİHA and JİNHA are agencies Kedistan, among others, follows regularly as precious sources of information. Their staff is regularly chased down, and taken into custody… Zehra Dogan, presently in prison awaiting trial, is a living example of this.

JİNHA, Jin Haber Ajansı (literally, “Woman News Agency”) founded March 8 2012, has the distinction of being the first news agency in the world whose contributors are all women.

Following the announcement of its closing down, the agency published a press release declaring its determination to carry on the work and re-affirming once again the importance of its editorial line.

JİNHA started out with the legitimate goal of “changing the language of media”. It managed not only in making its mark but in imposing its style with all its contributors being women, from the field correspondents to the editor’s desk, from the technicians to the office employee. JINHA describes itself as “the alternative to the alternative”, and works without concession to its principles, despite the difficulties caused by its outlook and language.

JINHA’s correspondents follow events in Turkey as well as in Syria and Irak. The agency plays an important role, having been the first to inform that the Revolution taking place in Rojava is a process based on women. The agency’s journalists are often targeted for their political stance, as well as for their identity as women.

As examples, Vildan Atmaca, correspondent in Van, was arrested for “publishing the photo of Arîn Mirkan”, a YPG combatant in Kobanê. Following the liberation ofVildan, it was Rojda Oğuz’ turn, again in Van. Beritan Canözer was taken into custody and jailed for “being too enthusiastic”. And these are names a few among several others. In parallel to their work in journalism, the struggle continues to defend their colleagues so they may recover their freedom and their jobs.

In Sinjar the JINHA correspondents took risks in following the battles. In the Sur neighborhood of Diyarbakır, Şehriban Aslan, was wounded to the head by a tear gas canister thrown by the police. She spent months in intensive care at the hospital for a brain concussion…

In Cizre, under curfew, the journalists from JINHA did “Peace journalism” in full war, in the heart of neighborhoods covered by sub-machine gun fire and canons. Zehra Doğan correspondent from Nusaybin, is presently imprisonned in Mardin, awaiting her first hearing on November 9. On Kedistan, you will find   an ongoing postcard campaign in support for Zehra and her friends.

“JİNHA cannot be muzzled” says the press release. “We will continue to write, without paying attention to what the men will say.”

JINHA is the voice of women!

Support rushes in on social media!

İstanbul Feminist Kolektif : “JİNHA is us.”

Erktolia : “JINHA the first women’s agency in the world has been closed down”. #JİNHAsusturulamaz (JİNHA cannot be muzzled) #KadınlarınSesiSusturulamaz (The voice of women cannot be stopped)”

Filmmor  (Women’s Film Festival) : “Virginia Woolf in 1929. JİNHA 2016. For 100 years, we have been writing ‘without paying attention to what men may say’! If you think it is possible to ‘close’ this, and abolish it”

Kadınların Kurtuluşu  :”JİNHA who writes ‘without paying attention to what men might say’ will continue to write thanks to our struggle, the women’s struggle. ‘We were, we are, we shall be!” »

Mor Çetele : “A decree has closed down JINHA, one of the voices of women. You will not be able to shut the voice of women!”

Feminist Gündem : “#JİNHAcannot be muzzled because JİNHA makes the voice of the street, the voice of women, resonate.”

Filiz Kerestecioğlu (Jurist, feminist, HDP deputy) : “JİNHA is the voice of women. Our agency where the youngest and most talented journalists work is unique across the world. We will never shut up!”

Kedistan offers JINHA its support, and through JINHA, to all oppressed journalists and closed down media,